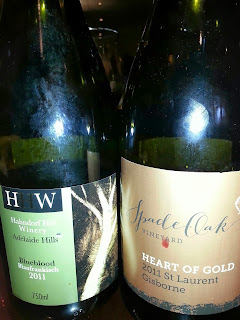 We’ve kept in scratchy contact with The Tigger, and why not?  She’s lively and vibrant, really ‘out there’ as few people really are.  New things, especially wine perk her interest, and that’s a bonus for all her friends who she is affiliated and associated with.  And we count ourselves among them.  The Tigger came back to this country after an extended sabbatical, and we promised ourselves a spot of lunch.  She has a special bottle, hard to get hold of, so we put something up to match it.

Visiting the Hahndorf Hill Winery in the Adelaide Hills, The Tigger was smitten by the idea of their Blaufrankisch, but it was sold out, as it does, very quickly on release.  A frantic search unearthed a bottle of the 2011 in a retail store, and The Tigger snaffled it and dutifully brought it back home.  What to match it with?  SWMBO had a bottle of a 2011 Spade Oak St Laurent.  So two Austrian red varieties associated by origin and affiliated by their Pinot Noir-esque nature!

Onto tasting, firstly the 2011 Hahndorf Hill Winery ‘Blueblood’ Adelaide Hills Blaufrankisch.  Lightish in colour and a little tight on nose and palate.  Somewhat lean and sinewy, with crisp, firm acid and firm, fine grip.  That European dryness and acidity that needed some food.  Not quite hard and harsh.  But beguiling red fruits with a border of herbs and earth.  In the glass developing greater depth and body to become reasonably substantial.  This is a wine you could nurse  a glass and your interest would grow.  No wonder it’s popular.

Then the 2011 Spade Oak ‘Heart of Gold’ Gisborne St Laurent.  A little darker in colour.  Immediately aromatic and lifted with bright fruit.  Seemingly riper, and certainly sweeter and more fleshy and juicy in the mouth.  Supple, rounded tannins and fresh with light acidity.  This has mellowed out over the last year.  Maybe a little softer and plumper now too, making it delicious on its own.  Nice liquorice notes at the heart of it all.  On first impressions, this was the better wine, but in the glass more static, allowing its affiliate grow to match it.  What a wonderful pairing of  Austrian red varietals in Australasia.
Posted by Wine Noter at Monday, September 30, 2013 No comments: 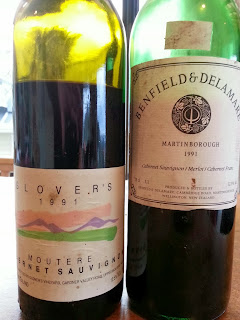 Going green is a good thing nowadays as we respect the environment, but there’s the negative connotation with unripe fruit.  It’s hard to tell how green that something green starts out on the edge will turn out.  It may take a decade or two of experience and learning to get it right.  I’m still not sure if I can make the correct calls.  Way back, around two decades ago two wines presented themselves to me, and we discovered if the right decision was made
.

At a super judging competition that I was involved in at the time, I tasted the 1991 Glover’s Moutere Cabernet Sauvignon.  I still remember at the time, it was black as black and massive.  The greatest extraction and tannin I’d seen in a wine of its type.  It was black fruited and absolutely linear and monolithic.  In the competition, I reckon they discarded it because it was too tough and out of balance.  I saw potential and reckoned it needed 20 years of cellaring.
Well, time was up.  We had the Gass-Man in town, and he described it well.  Still very dark, nearly black.  Pea-shoots galore.  Yes, too herbaceous.  The tannins had resolved, but there was still some way to go.  High, almost searing acidity.  I could live with that.  But the greens!  We’ve come a long way since then, and the herbaceousness was too much.  Its 12.5% alcohol might have been a giveaway
…
In the tiny settlement of Martinborough, Bill Benfield and Sue Delamare were doing it differently.  Most people said Pinot Noir.  They stick to Bordeaux varieties.  Then came Mt Pinatubo, and the cool 1992 and 1993 years sealed the Bordeaux varietal’s fate.  Most other replaced the varieties to Pinot Noir.  Not Bill and Sue, they stuck it out ‘til 2006.  At the time, I picked the 1991 Benfield & Delamare Martinborough Cabernet/Merlot/Franc as very claret-like.  It too was a dark beast, with with elegant acid, and definite blackcurrant flavours.  Not as tannic as the Glovers, still significant.  Many people thought I was making a wrong choice.

Time to drink this one too, to pair with the Glover’s.  Lighter in colour, with more savoury berry, earth and undergrowth notes.  Fine tannins and balanced acidity.  A little plain at first.  Then SWMBO picked up more nuance.  The Gass-Man and I agreed.  Layers of detail emerged.  It became sweeter.  It was very claret like, and I’d imagine a 1989 Margaux or St Julien might not be dissimilar.  This hadn’t gone green.  Lovely.  A decision well made.  Maybe I was lucky, as the alcohol on the label said 12.5%.
Posted by Wine Noter at Thursday, September 19, 2013 No comments: The P-Prince has a preference in red wines, but we know he’s open to trying all sorts.  It’s just a matter of opportunities, and he has different ones to us.  We have the access to styles he doesn’t  and never did cellar, so it was a pleasure to open a couple of these markers for SWMBO and I on our vinous journey.  Interestingly enough, we all tended to agree on their condition and status, with respect to how much our industry has advanced.


The first of the markers was a 2005 Te Mata ‘Coleraine’, a great year in Hawke’s Bay, and a great vintage for the Te Mata team.  Regarded as a classic by them, and easy to see why.  Dark in colour, and still very fresh with mainly primary aromas and flavours of blackcurrants, with a suggestion of savoury olives and plums.  Plenty of tannin grip and structure, moderated by fruit sweetness and a line of acidity.  A decade ahead of it.  Looking critically, this is not as dark and ripe as the wonder wines coming out of the region.  The Coleraine looks positively cool, with hints of leaf, and the acidity sticking out.  The Brits would say ‘classic claret’ and the Aussies swoon.  The Americans and avante garde Kiwis would deem it less than ideally ripe.  We all enjoyed it, noting and marking these points.

The other was the 1991 Esk Valley ‘The Terraces’, a blend of Merlot, Cab Franc, Malbec and Cabernet Sauvignon, from the sun-trap hillside behind the winery.  The first of the line and a special wine in its day, pushing the other Bordeaux varieties ahead of Cabernet.  Its plumminess and ripeness the feature.  This bottle over two decades later, still dark and deep, but with bricking.  Rich flavours of savoury plums, dried herbs, cedar and soy sauce, along with a subtle green line.  But also noticeable acidity ahead of the tannin extract, which was becoming resolved.  In today’s terms, certainly not ripe enough.  But easy to drink, especially knowing we were drinking history and a marker for the industry.
Posted by Wine Noter at Monday, September 09, 2013 No comments:

As Expected and More 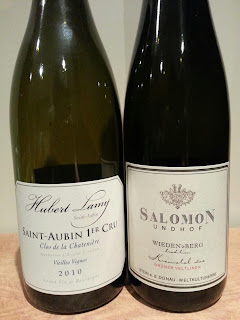 Sometimes you look at a label and you know exactly what it’s going to give you.  And if you’re lucky, you get a bit more than what you might expect.  It’s a pleasure when that happens.  You’re happy because you receive all you’d ask for and then a little more.  A nice treat for the day.  Our friend the P-Prince brought along a box of wine, and there were two disasters on opening.  His previous experience was that they’d passed their ‘use by date’.  And sure enough, they had.  He’d been hoping they might be better, but alas no, and they were as he thought they might be.


Then onto the next two whites.  His contribution was a 2010 Hubert Lamy Sainr Aubin 1er ‘Clos de la Chateniere’.  Lamy is based in Saint Aubin, but it ain’t the most prestigious place for white burgundy.  ‘Also-ran’ might be an apt descriptor, or ‘poor man’s Puligny’.  However things are on the up there, and some smart wines are being made there nowadays.  Our thoughts – it could be better than expected, and sure enough it was.  Much better.  Rich and fat, with body and depth.  More Meursault-like, and delicious with white florals, nuts and a hint of creaminess.  The bottle didn’t last long, especially with SWMBO in raptures.

Then a 2011 Salomon Undhof ‘Wieden & Berg’ ‘Tradition’ Gruner Veltliner from Kremstal.  Gruners can be straightforward or really complex.  Unless you go to the higher levels and specifics, GV is usually the former.  This Salomon has the reputation of very smart straightforward.  And indeed it was.  But as you drank it, the classic herb, pepper and waxiness grew and the textures from the phenolics became the feature.  This is the sort of stuff many people strive to achieve, and here it is, all apparent quite naturally.  It delivered more than expected.
Posted by Wine Noter at Saturday, September 07, 2013 No comments: