Anyone who has followed my blog for any length of time knows that I am a fan of the Donnhoff wines from the Nahe in Germany.  Some subscribe to the thought that the Nahe wines are similar to those of the Mosel.  Then there are others who say that they share a lot in common with Rheingau wines.  To tell the truth I’m a fence sitter.  They are their own style, and I’m sure that those who grow and make Nahe wine would say the same, as they would appreciate the subtle differences more so that outsiders.

The Donnhoff Oberhauser Leistenberg Kabinett has long been a regular staple at our household, SWMBO and I just whipping out a bottle whenever a guest turns up.  Invariably, it’s delicious with its fresh florals and limes, soft acidity and gorgeous balance.  You don’t need to wait for it to come right or settle down.  It’s ready for drinking straight away, but it’ll develop well for several years.  That was just the case with yet another bottle of the 2016 Donnhoff Oberhauser Leistenberg Riesling Kabinett.  All our guests loved this wine.  It needs ‘No Time’ to cellar. 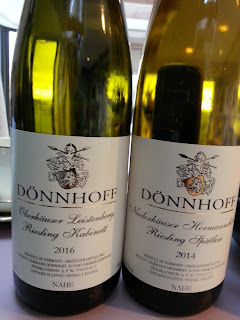 But it’s a different kettle of fish with the Donnhoff Spatlesen and Auslesen wine.  These are somewhat rarer, and definitely more expensive.  Quite a bit more that you might expect.  I’ve had some glorious examples of the Spatlese especially, but with some bottle age.  One can get caught out with the high sulphur levels – which help the tine age – just as at J.J. Prum.  The 2014 Donnhoff Niederhauser Hernannshohle Riesling Spatlese was just that, lots of free sulphur, maybe a touch of bound sulphur too.  The fruit deliciousness was there, with that extra richness – but no, the sulphur got in the way.  A bit of air time helped.  But not enough for me.  The next day SWMBO proclaimed it free, but not for me.  It’s a wine that needs ‘Tiime’ to cellar.  I’ll try not to make the same mistake again.

The range of sweet wines is enormous as is their diversity.  From gentle late harvest to full-blown botrytised wines; then there’s the factor of style, from variety, place, balance and other inputs such as maturation with wood or even controlled flor-yeast effects, as in Takay.
SWMBO and I invited The Normal Man and I-Spy Man together, for pre-loading, as we were heading out to a wine and food matched dinner with Ch. d’Yquem (that’s another story).  We had the choice of many different wines, from bubbly to gently sweet.  But we opted for full-on exoticism and decadence. 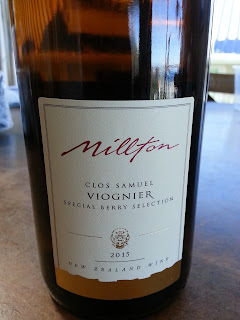 The 2015 Millton Vineyard ‘Clos Samuel’ Gisborne ‘Special Berry Selection’ Viognier was what we happily settled on.  The wine comes from a section of the Te Arai vineyard, near the river, where the fruit is prone to botrytis infection.   And in 2015, the Viognier, left out there, got infected in a big way.  James Millton instructed the pickers to select berries properly affected and dried.  The wine is thus technically a Trockenbeerenauslese, but in typical deprecating fashion, he’d rather say it’s closer to a Beeerenauslese.
No matter, the wine was gloriouslu decadent and opulent.   Light orange colour, and with the subtle aromas and flavours of apricots and tropical fruits, with an overlay of orange marmalade, unfolding caramel and toffee.  Unctuous on the palate, but with enough acidity for cut – just.  And just enough alcohol for power, drive and line.  Just a glorious exotic wine to sip on.  It flowed easily, and indeed it did gum up our palates a little.  But then the stickiness cleared.  When we looked back at this wine and compared it to the five vintages of Yquem, it wasn’t out of place.

I always seem to feel a wine ‘shines’ when it is of excellent quality.  Others talk about a wine ‘singing’ and I can understand that too.  But ‘shine’ indicates a lustre in the appearance and a brightness of aromatics, then a sweetness or richness in taste.  It is a descriptor that works well for me. 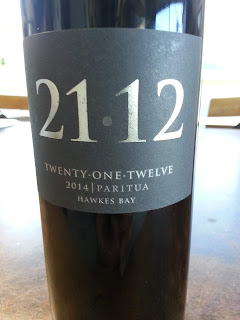 The latest wine to ‘shine’ for me was the 2014 Paritua ’21.12’ Hawke’s Bay.  This is the flagship red from this producer in Maraekakaho Road, south-west of Hastings in Hawke’s Bay.  It’s a Cabernet Sauvignon dominant wine with plenty of Merlot and some Cabernet Franc.  It’s made from the best fruit that the vineyard yields, and then winemaker Jason Stent works through all the ferments, and I suspect does the most rigorous of barrel selections.  Black-red with youthful purple hues, the Cabernet Sauvignon shows, but with gorgeous aromatic ripeness.  There’s no herbs here, but there is definitely cassis.  Than then that lifted exotic and new oak adding to the aromatic decadence.  The palate does the same – expressing rich, perfectly ripened black fruits – no over-ripeness, succulent and sweet, the considerable structure, all fine grained, then the new oak lift.  This is brilliant and truly shines.

Alive from the Limestone

It is an accepted truism that limestone-influenced soils yield wines with more tension and liveliness.   It is said the ‘active acidity’ in the soils is conferred to the wines, giving them increased aromatic finesse, and a brightness of palate.  And of course, that magic word – ‘minerality’.  In a slightly more scientific bent, it’s the lower pH of the soils.  One is always pointed to the classical burgundian examples of wines from Volnay in the Cote de Beaune, and in Chambolle-Musigny in the Cote de Nuits.

And from countries blessed with a variety of soils, the include limestone, this principle is touted as gospel.  Just recently I attended a tasting of North Canterbury wines in which the limestone-influenced wines were indeed lighter, more elegant and definitely more perfumed that wines from neighbouring soils.  The clay-influenced wines were heavier and more structured, but that’s another story…

One of our new vignobles in New Zealand is that of North Otago around the Waitaki Valley.  The climate there is not as benevolent as other areas, and yields are seldom satisfactory.  A number of winegrowers were attracted to the area because of the significant presence of limestone in the soils.  But due to economic hardship, many have gone.  Not so Ostler Wine, the enterprise of Jim and Anne Jerram and her brother Jeff Sinnott.  They have persevered, enthused and in fact grown in the size of vineyards.  More importantly, they have released continually from the start, a line of wines that showcase minerality. 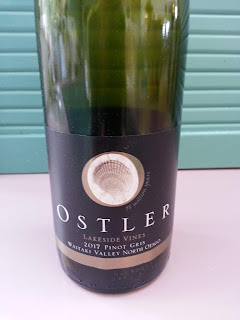 The Ostler ‘Lakeside Vines’ Waitaki Valley North Otago Pinot Gris 2017 is a beauty of a wine with clarity of varietal expression with stonefruits, exotic florals and the complexing hand of barrel and lees work to contribute to the mineral expression.  The palate is a healthy 14.5% alc. and it shows a little, but I like power.  The palate has tension as well as the drive, and that sense of minerals throughout.  It’s enough to make people jealous, and consider giving the Waitaki Valley region a go.