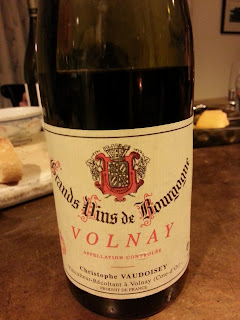 At the start of the year we had as our guests the Ally Pally Helly couple, and they were very generous leaving us bottles of wine to consume at our leisure.  We’ve worked our way through most of them, and one bottle was kept back for a situation which might have appropriately interested whoever we had visiting.  The I-Spy Man was in town and it was time to bring out the residual of our guest’s generosity
.
Who’d think a 1996 Christophe Vaudoisey Volnay might be holding up well?  After all, it was a village wine at 18 years old, from an appellation better known for beauty and finesse rather than structure and longevity.  But then again the vintage was pretty good.  Out with the cork, and mahogany red.  Interesting and complex tertiary aromas of earth, undergrowth and dried herbs, along with truffle and resinous seasoned oak.  High-toned still and Volnay aromatics for sure.  Then more surly than expected on palate.  This would have been quite a big wine in its youth.  Concentrated, savoury, undergrowth, and resinous with the taste of the mahogany colour.  Smooth flowing for all its substance, the tannins resolved.  A bit gamey and old woody, not decrepit in anyway.   And a wonderful line of acidity keeping it sweet enough for another glass, followed by another glass.
Ally Pally Helly, you can rest assured that SWMBO, the I-Spy Man and I enjoyed it to the last drop.  No residuals.
Posted by Wine Noter at Friday, November 27, 2015 No comments: 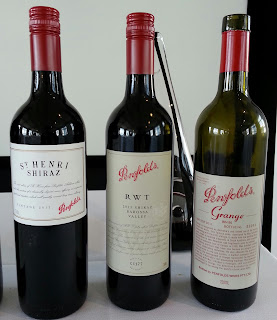 As time has gone on, the world’s best wines have become luxury commodities.  Such wines are becoming out of the reach of the ‘average’ wine drinker who just wants to try something special, albeit a little more expensive than usual.  Penfolds ‘Grange’ has always been a bit too dear for most wine lovers.  They have to consolidate their resources to buy bottles to share – just to get a taste sometimes.  Mercifully, the other Penfolds wines were more accessible.  However in the late 1990s Penfolds introduced more special wines, and sure enough the prices across the board moved up.  To be fair, the wines are not out of whack against other such highly-rated wines, but buying them makes a dent in the purse or wallet.

It helps to have friends in the wine trade.  Most years I get invited to taste the Penfolds Luxury and Icon range, and I was lucky to do so this year.  The ‘Big Three’ available were ‘St Henri’ 2012, ‘RWT’ Shiraz 2013 and ‘Grange’ 2011.  The 2012 Penfolds ‘St Henri’ is all about evenness and smooth, unadulterated fruit.  Those who know the wine better saw that 2012 was a perfect year for the wine, with its ripeness, perfectly refined extraction, size, structure and moderate sweetness from well-ripened fruit.  I saw it that way too, but the excitement just wasn’t there to make it special.

But then the 2013 Penfolds ‘RWT’ Barossa Valley Shiraz is other-worldly.  Sheer richness, sweetness and opulence.  Sleek and super-ripe, the black-fruited Shiraz was matched by the black minerality and iron-earth of the vintage.  This is indeed one of the great vintages, and it's not even an even year!  The decadence of the wine counterpoised to perfection by the structure, power and presence.  I’d fork out my own dollars for this pretty much perfect wine.

Then the 2011 Penfolds ‘Grange’.  A rare 100% Shiraz wine.  Usually there’s a small amount of Cabernet.  This is always about size, as much as you can cram into the wine without it becoming something else.  2011 was a hard, wet, diseased vintage.  Penfolds ay it isn’t their best Grange for sure.  But they’re adamant it’s the best 2011 South Australian red.  I like that statement.  It’s big wine alright.  And unmistakably Grange with that massiveness and oak.  It just misses out in fruit sweetness and ripe acid vibrancy.  You readers don’t need to bother with it.  Just leave it with me.  I’ll be happy with it.  Some of us have the hard jobs.
Posted by Wine Noter at Wednesday, November 25, 2015 No comments:

And Then There Were Two 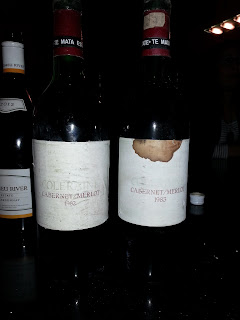 I’ve followed and been a fan of Te Mata Estate in Hawke’s Bay before they released their Coleraine and Awatea wines in 1982.   Founder John Buck had a persona that was larger than life, and he spoke with great confidence, his European training at the best establishments giving him an edge over other winegrowers at the time of the late 1970s and early 1980s.  His business partners were also highly respected professionals who knew their stuff.  I went to visit the premises in the fields where Havelock North is now urban, and bought Chalino, Rose and Furmint.  The 1980 and 1981 Cabernet Sauvignons were sensational at the time, and the 1982 and 1983 Te Mata Coleraine and Awatea wines as cutting edge as they could be.

I’ve had the opportunity of tasting the 1982 and 1983 Coleraine on a number of occasions, and they are wonderful to compare.  They each have their supporters, the 1982 riper, more even and harmonious, with a beautiful elegant balance, and the 1983 with brighter, seemingly darker berried fruit, more pronounced structure, and vitality.  At some times I’ve preferred the 1982, and others the 1983, and if anything probably more for the latter.  I have slowly whittled away at my bottles, and then I noticed there were two remaining, one of each.

The occasion was a get together at the A-Prentice’s, where some of these older wines go down well.  The 1982 cork disintegrated even with the two-pronged extractor.  The 1983 cork came out in one piece.  Once poured, we could start the analysis.  The 1982 Te Mata ‘Coleraine’ fading brick colour but with a heart.  Soft, gentle and tertiary with dried out red fruits, earth and herbs, but all very integrated and mellow.  Soft and earthy on the palate, faded tannins, and a little acidity.  Totally mellowed out, resolved and past its best now, with drying fruit.  Yet a pleasing balance and only a hint of the decrepit.  This was an easy glass to sip on.  The 1983 Te Mata ‘Coleraine’ darker with hues of red to the mahogany!  Distinctly cool-climate viticulture with blackcurrants, herbaceousness, leaf and stalk.  We’ve come a long way in 30 years.  Intensity to the green and a slight earthy grubbiness.  But still acid, tannic and vigorous.  Just a bit harsh.  Greens can help keep a wine alive, as it had here.  Sure, it was more alive, but sharper and less pleasant.  You take your choices on what ticks your boxes.  Tonight it was the 1982 for most of us.

Here, we were drinking New Zealand wine history.  There were far superior, modern wines on the table, but none quite with this pedigree.  Lucky old us!
Posted by Wine Noter at Thursday, November 19, 2015 No comments:

Big Bottles Go Down in a Big Way 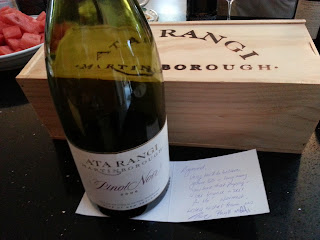 The annual pre-festival get-together at the A-Prentice’s turned out to be another grand affair, with plenty of food brought along and even more wine lined up for all to try.  As there’s quite a few of us, ‘small sips’ is the order of the day, so that there’s a bit of every wine available for all to try, and one doesn’t get hammered by drinking too much.  That’s normal etiquette and courtesy, of course!

As a bit of a treat, I brought along a 2005 Ata Rangi Martinborough Pinot Noir Magnum.  It was given to me by the Rangis for my 50th birthday.  That was just about a decade ago.  It wasn’t my birthday that night, but it was a good occasion to share it, so that guests could share a bit more than they might normally taste with a single 750 ml bottle…

The wine was glorious and in fantastic condition.  Still dark as dark as red could be.  Beautiful aromatics of savoury red berries wafted from the neck of the bottle and from each glass poured.  Still quite sizeable, even after a decade of age, and vigorous with it.  Sweet fruited, juicy and lush, in the darker spectrum, and plenty of savoury complex dark herbs and a touch of truffle and undergrowth peeking around the corner, but you’d hardly recognise it as such.  The small berry-high skin ratio regime operating, but here there was no greenness, which can appear with time.  Perfect structure and grip with no coarseness and just the right amount of acid liveliness.  It was truly a treat.

The only one unsavoury thing – one greedy couple helped themselves to big pours, not once, but twice, meaning that everyone else had to have the normal smaller serve size.  I’m sure they thought no-one noticed, but many people did…
Posted by Wine Noter at Thursday, November 19, 2015 No comments:

As Cool As Can Be 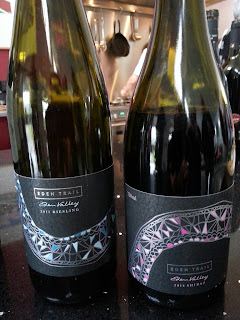 I’m sure most of us have a go at being cool.  To be fashionable shows you are aware of the popular trends.  But those who have been around a while know that fads come and go, and there are cycles.  The clever path is to be consistently good.  Cool-climate winegrowing is fashionable, but the Eden Valley has always been that way.  Thorn-Clarke own plenty of vineyard there, and their ‘Eden Trail’ wines are designed to showcase cool.

I fell in love with the 2015 Thorn-Clarke ‘Eden Trail’ Eden Valley Riesling.  Pale as pale can be, and delicate with lime flowers and rainwater.  Light bodied and thirst-quenchingly dry, with the finest phenolics.  Lovely fresh acidity to cap it all off.  This is really cool wine!  A little more conventional in taste was the 2014 Thorn-Clarke ‘Eden Trail’ Eden Valley Shiraz.  Blackberries, plums, liquorice and eucalyptus.  Quite a structured wine with a bit of grunt too.  But its stand-out character is its perfume.  Flowers, lavender, herbs and exotics, then that cedary oak kicking in to remind you this is a true-blue Ocker.
Posted by Wine Noter at Wednesday, November 18, 2015 No comments: