The Aussies tend to have a habit on contracting names, more often than not in a sign of affection.  As Aussies can do, they put an edge into the name, just to keep everyone on their toes.  So I don’t think there’s any misogyny in shortening the name of the premium Hunter Valley winery ‘Bimbadgen’ to ‘Bimbo’.  Don’t let being PC control pour lives; just have a bit of fun in once in a while.

The Chairman actually knows Bimbo (the winery) very well, and has done many good works to improve the breed of the wines, especially with winemaking advice, but also in thoughts of viticulture and management.  These all impact on how a wine can taste.  From being ‘another’ label, albeit with decent wines, the output is in the classier level, with many of the wines winning good show awards. 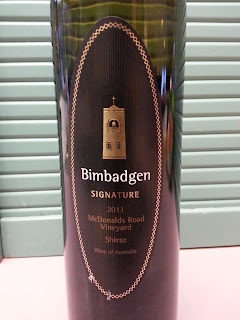 We were graced by The Chairman visiting SWMBO and I, and as a gift, he left us a 2011 Bimbadgen ‘Signature’ ‘McDonalds Road Vineyard’ Hunter Valley Shiraz.  My early experience with Hunter Reds is that of ‘soupiness’ with plenty of bugly things happening.  Then the modern age  kicked in, and the wines became very varietally expressive, pure and lean, maybe too skinny.  They had lost the Hunter character.  Being warm and humid, there are huge challenges in the region, so there are advantages in picking early.  2011 was seen as a great growing season, and the wines are said to show the Hunter as it be.  Dark and impenetrable black-red with some garnet of bottle development, this was dense and weighty on the nose as well as palate.  Not really varietally expressive, it was more a rich, sweet, ripe, hearty red.  Mulberries rather than blackberry or raspberry.  No real peppery overtones, but plenty of tar and earth and layers of interest bordering on the funkiness of those old ‘soupy’ styles of the past, but with all the negatives removed.  It tasted of traditional Hunter as I see it in my experience.  Nice underlying structure held up the fruit, and just enough acidity to prevent it being flabby in any way.  A nice, heartwarming number and certainly no flashy, empty Bimbo.

In our part of the world, we tend to love white wines with up-front flavours boldness, rich mouthfeel and weight.  That’s why Chardonnay and Pinot Gris are among the most popular varieties.  Sure, we have a segment of the market that much prefers the taut, lean and minerally whites, that say, dry Riesling can offer.  However, we tend to forget that much of the world , particularly the ‘Old World’ likes them elegant, very dry, and crisp with brisk acidity, or thirst-quenching with dry phenolics. 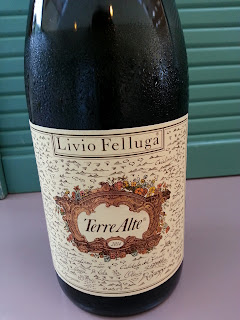 Our guest Mosy, staying with us from the U.K. brought along as a gift, a wine that typified the style that she had come accustomed to as being a brilliant white.  The 2014 Livio Felluga ‘Terre Alte’ Rosazzo DOCG was a rare white bird from the north-east Italian commune of Cormons, in Friuli-Venezia Guilia near the border of Slovenia.  In the hills of Rosazzo, Livio Felluga has been making wine for over 60 years, his family winegrowing for five generations, but in modern time the name has become one of Italy’s most prestigious.  The ‘Terre Alte’ is one of the ‘map wines’, not a single varietal but a blend of Friulano, Pinot Bianco and Sauvignon, the Friulano fermented in small French oak and the other two in tank.  The wine is aged on lees for 10 months.  It’s not about technique or variety, but all about place and the resultant style.  Crisp, steely, very dry with penetrating, mouthwatering floral and white stonefruit flavours, minerals, and herbs and some green stonefruits, maybe nuts too.  It’s an expression of alpine.  Beautifully poised and precise.  In our country, it could be seen as austere.  In Europe, a wine of finesse and style.

A Decade Old and Doing Well

In our professional wine lives as retailers and critics, it’s always safer to underestimate the aging ability of a wine.  You can look pretty bad if you say a wine will last 15 years and is undrinkable and out of sorts at 5.  But you can appear a hero if you predict a wine will last 5-6 years and 15 years later it is going strong.  The theory is that the longer a wine takes to get to maturity, the longevity grows exponentially, rather than the one-third growing, one-third at peak and one-third in decline.  That’s why clarets with 50 years of age can appear to last another 50!

My usual drinking window for a decent New Zealand Pinot Noir is 5-6+ years, maybe a little more being generous.  So it was a great opportunity to see how well the Misha’s Vineyard ‘High Note’ and reserve-style ‘Verismo’ Central Otago Pinot Noirs from 2008 would be with a decade of age on them.  Some Pinot Noir wine was made in 2007 – the first crop off the vines.  It was appropriately called ‘The Audition’.  Owner Misha Wilkinson is from a musical, dance and stage background, which explains the names of the wines. 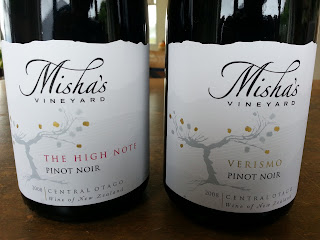 The 2008 Misha’s Vineyard ‘High Note’ Central Otago Pinot Noir was showing a little garnet now.  Surprisingly, it had lovely fruitiness with the savoury secondary dried herb and undergrowth notes somewhat in the background.  Don’t get me wrong, it certainly had aged characters, but the tannins were still finely firm, and the mouthfeel fresh.  An elegant wine, quite velvety, and in no hurry to drink up.  Another 5+ years easily ahead of it, maybe more?

The 2008 Misha’s Vineyard ‘Verismo’ Central Otago Pinot Noir was a barrel selection wine.  Clearly picked for fruit richness, with power and structure.  The wine has retained those elements, with some savoury undergrowth development.  But still sweet-fruited, and with tannins to resolve.  The flavours riper and also some more oak.  This could go another 10 years for sure.

Both wines were showing the benefits of increased complexity with bottle-age.  Neither had gone past tjheir best, and were drinking on their plateaux.  Delicious, and clearly my usual preditions of aging ability were on the very safe side!

The reference point for any self-respecting Chardonnay winemaker is white burgundy wine.  The Burgundy region has made classical wine, and is famous for Chablis, Corton-Charlemagne, Meursault and Puligny as well as Chassagne Montrachet.  The styles of wines from these appellation varies to district and also to winemaker style, but there is a familial character which is distinctive.  It’s the restrained fruit, and fine textures as well as a sense of minerality.  And that difficult to describe thing called ‘terroir’.

Michael Barjkovich MW took the path of white burgundy 30 years ago when he started making the Kumeu River Chardonnay.  Je used wild yeasts, and fully barrel-fermentation and aged the wine in barrel with lees-stirring, and the wine went through full MLF.  Of course he’s refined his techniques somewhat, but essentially the formula hasn’t changed and the wines are really vintage expressive.  Along the way, he’s introduced the single vineyard ‘Mate’s Vineyard’ named after his father, then the ‘Coddington’ and ‘Hunting Hill’ single site wines (as well as a lower tier ‘Village’ wine.  More than shades of white burgundy in the tiers and nomenclature!

What is so special is that the wines behave consistently across the labels and sites, with each vintage.  The ‘Estate’ wine is a village Puligny in style.  The ‘Coddington’ can be compared to a Meursault.  The ‘Hunting Hill’ was like a premier cru Puligny, but is may be a grand cru style now.  The ‘Mate’s’ was always compared to grand cru from Puligny.  Interestingly, the wines have found their place in the market, the ‘Mate’s’ fetching the highest price, followed by the ‘Hunting Hill’, then the ‘Coddington’ with the ‘Estate’ Chardonnay the most accessible. 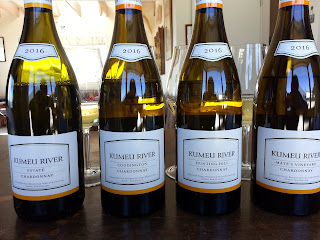 The 2016 Kumeu River Chardonnay set came my way, it it had to be shared, so SWMBO and I took them around to the Bassinet Babes.  They agreed with the accepted thoughts.  The 2016 Kumeu River ‘Estate’ Chardonnay was elegant and well-proportioned, with all the subtle wild ferment and barrel-ferment notes.  Perfect oaking with subtle nuttiness.  No evidence of diacetyl MLF.  Very nice.  Normally rich and rounded, and maybe buttery, the 2016 Kumeu River ‘Coddington’ Chardonnay was more elegant than rich and fat.  Maybe like a Meursault from a lighter year.  It was a little richer and with deeper flavours and greater intricacies than the ‘Estate’, but not by much.  But there was a big step up in the 2016 Kumeu River ‘Hunting Hill’ Chardonnay.  Much more intensity, and with greater complexing detail.  A touch of flint and minerals.  More oak for sure.  But a very well-defined wine.  This was a star.  In my mind, it was a match and maybe better than the 2016 Kumeu River ‘Mate’s’ Chardonnay.  The latter wine was a little restrained, and without quite the penetration of the ‘Hunting Hill’, but there was more depth and layering.  The differences were subtle at this stage of the line-up.  Mt heart loved this just a little more.

This year, the gunflint and matchstick solids characters and lees complexities were much lighter than in a really strong year.  These 2016s were still super, but I reckon there are even better years, such as the 2010s.

Funked Out or Fabulous

It was a lovely time catching up with The Sticky Lady.  She’d served some gorgeous aperitif wines and then it was time for dinner.  Then the Sticky Man put the steaks on the barbecue, and the table was full of meat and accompanying salads.  It was time for the big boys. 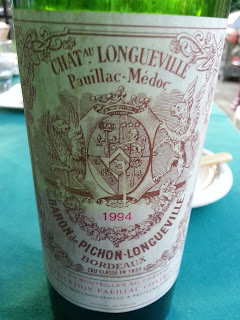 Firstly came the 1994 Ch. Pichon-Longueville Baron Pauillac.  This is a label that is highly revered now, as it has improved in leaps and bounds.  For a long time it was second to the Pichon-Longueville Comtesse, the latter much more feminine, beguilingly rich, and seductive.  I was always a fan for the Comtesse.  But then with AXA ownership, the Baron became a wine to be noticed.  Bigger firm and definitely more masculine – and more Pauillac.  It began being rated alongside the Comtesse, restored to former glories, and it had its fans who then preferred it over the Comtesse.  This 1994 poured out impenetrable black-hued red.  It was packed with masses of fruit, ripe and black, with the structure and grip to match.  But also the dreaded brettanomyces funkiness.  The fruit sweetness meant the wine was not dried out or hard, but that flavour was disconcerting, especially to SWMBO.  The secondaries also came into the mix, but in a sour way.  I drank a couple of glasses, but found it to hard in the end.  The Sticky Lady made the effort.  So did we.  But some things, such as funkiness, are out of our control. 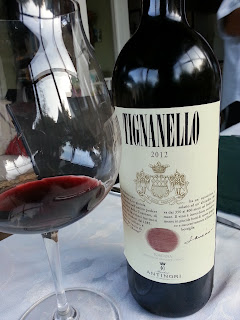 Then as if to make amends, the ‘back-up’ bottle arrived on the table.  It was the 2012 Antimori ‘Tignanello’ Toscana.  This has been one of the most consistent great wines of the world to me.  Sure, Antinori had to find its way in the beginning – do you go towards Chianti or to Bordeaux?  In the end Chianti – well actually Tuscany won out, the blend predominantly Sangiovese with a touch of Cabernet Sauvignon.  Yet, this has always had a leaning to Bordeaux – the 15% Cabernet Sauvignon and 5% Cabernet Franc have a much greater influence than the proportions suggest.  The Sangiovese is well-ripened and extracted, past the bitter cherry expression, and into dark-red and black berries.  Then there’s the oaking – classy and sensitive.  If all claret producers could do this, they would be superstars.  This has fruit richness, savoury nuance, beautiful oaking, and slight Sangiovese point of difference made this a fabulous drink.  Sure it was younger, but I’d bet my bottom dollar it’ll last better than the 1994 claret.  The bottle did not last long after opening.  I’d go for fabulous anytime over funkiness.