The Shady Dogs planned a big night, and it was wine after wine being pulled out of their cellar.  Even though SWMBO and I had been up for many, many hours, one just couldn’t get tired with all the vinous treasures being brought out.  As the night wore on, there’s the bracket of red burgundies that brightened everbody’s faces.  I can’t remember every single bottle, but here’ a good try. 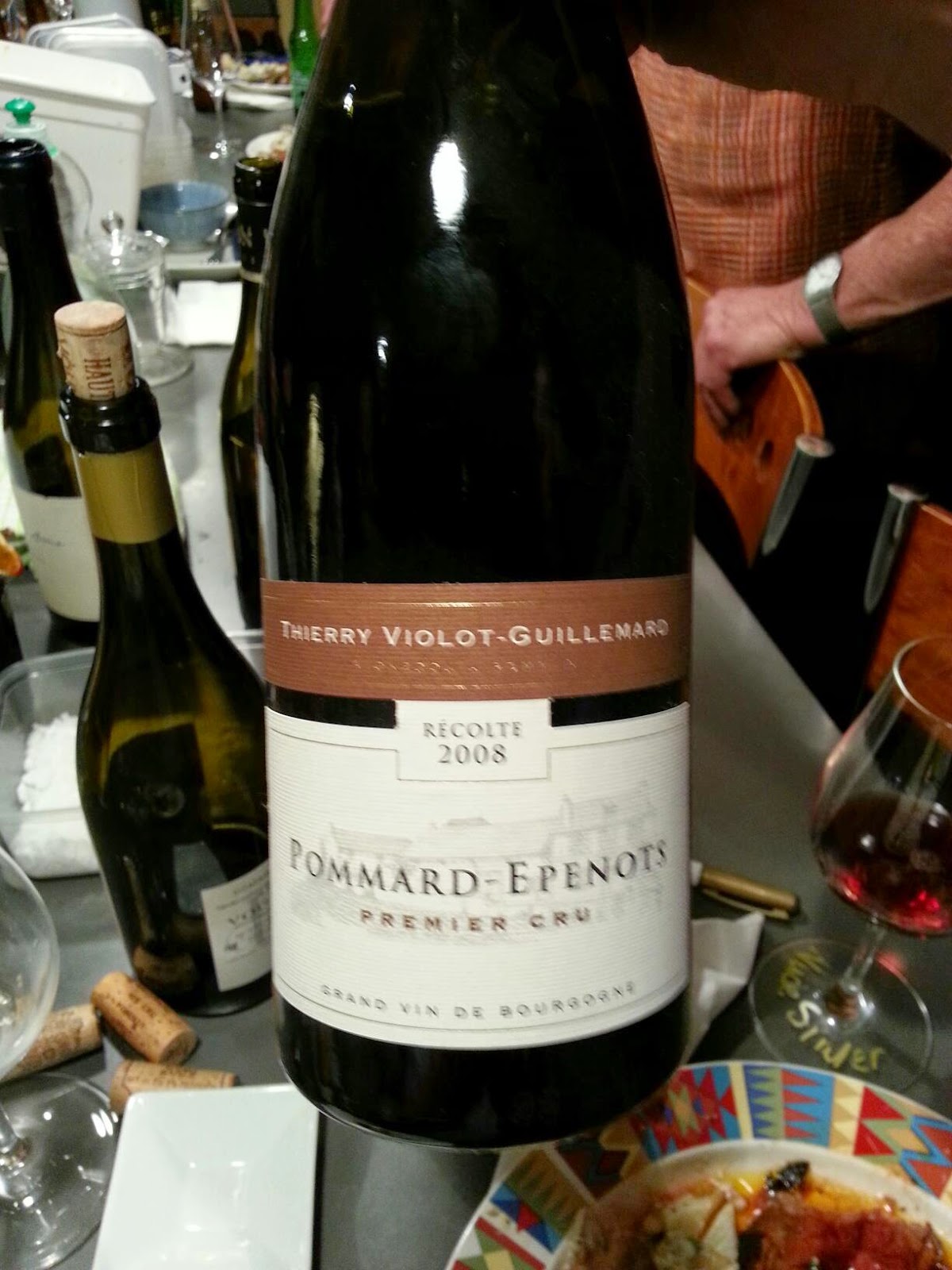 To set the scene, a 2008 Thierry Violot-Guillemard Pommard 1er ‘Epenots’.  Though the appellation had size and structure on its side, it was the cooler vintage that won through.  The Burgundians talk about wines from a cool, higher acid year as being more transparent for the exppression of terroir.  Cooler, greener fruit and no great structure, as well as a sinewy feel isn’t Pommard to me.  Having said that, it was still a tasty Pinot Noir, on the simpler side. 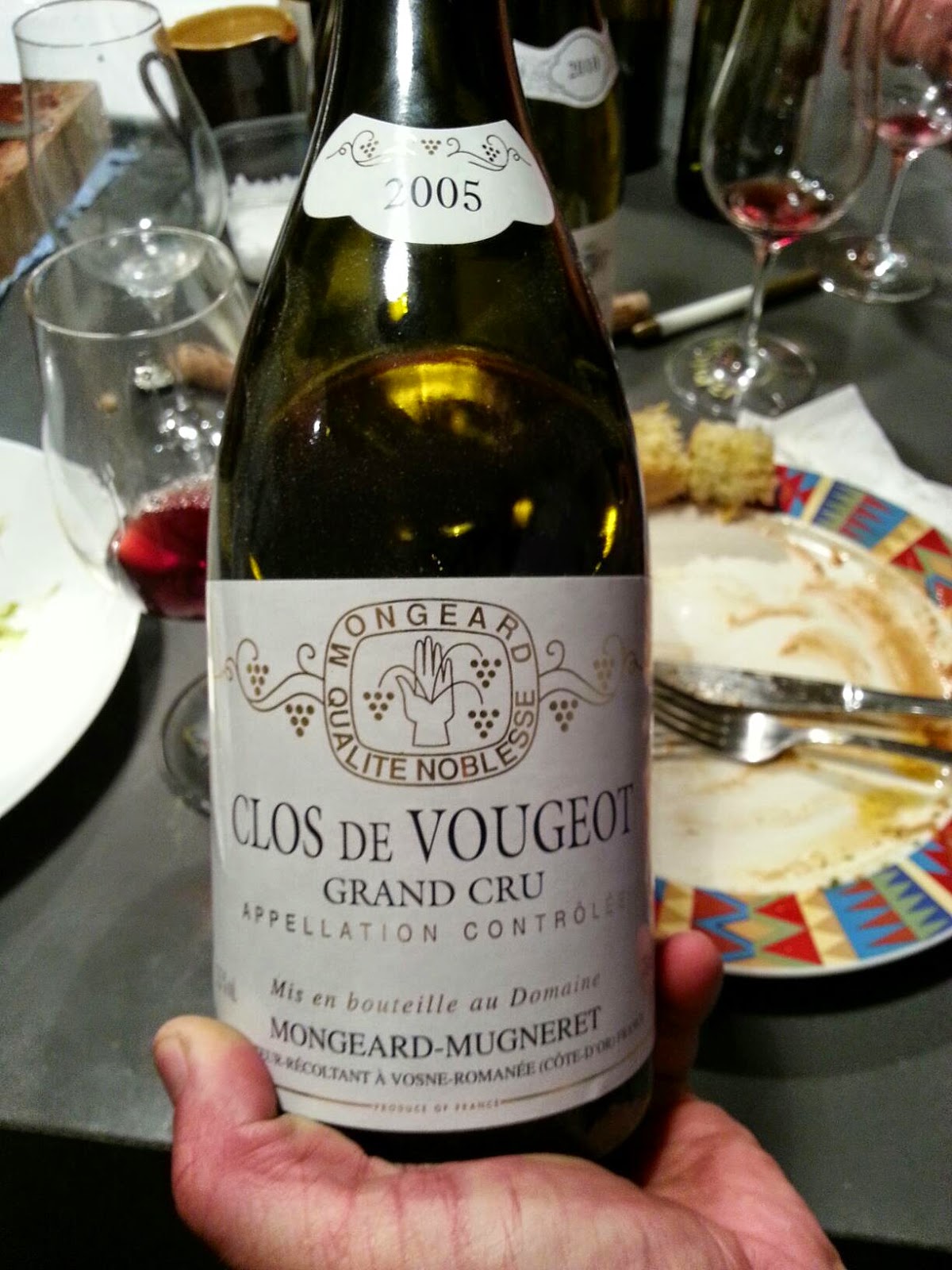 Then onto something serious.  The 2005 Mongeard Mugneret Cos de Vougeot Grand Cru.  Quite bid and tough, with a ‘look at me’ attitude.  Savoury secondary earthy aromas and flavours, black rather than brown fruits.  Big structure and density.  No prettiness here, but a statement of year, and grand cru size.  I’d have like a little more sense of aromatics, florals and ethereals to show the Pinot Noir conduit, but again vintage, but also terroir came through.

Armand Rousseau is everyone’s favourite burgundy producer.  I’ve drunk and tasted the full range of wines for nearly two decades, but nowadays, I don’t earn enough to do so with any regularity.  When in the company of Chambertin, Clos de Beze and Clos St Jacques, it was easy to put poor old accessible and charming 2009 Rousseau Charmes-Chambertin Grand Cru into the second tier of grand cru.  But here, on its own, quite sublime, with fragrance and elegance, beauty and suppleness.  But lo and behold, it had an iron core of structure and grip.  This was more than pretty.  It was pretty serious, and classical, perfect Pinot Noir and the charming side of Gevrey, if there ever is one.

Big name time: Domaine Romanee-Conti.  The bottles are big in physical dimension.  The font size is bold and statement making.  Even in a less than outstanding year, DRC commands attention.  And so did the 2007 Domaine Romanee-Conti Echezeaux Grand Cru.  Even at this level, the lesser of the DRC range is still head and shoulders-worthy above almost everything else.  This has moved into the secondary and tertiary complexity stages.  But still wonderfully structured and mouthfilling.  Great vitality, though now becoming a bit funky and somewht less than pristine.  A tactless person might hint at brettanomyces.  A sophisticated person might talk about complex corruption.  I’m certainly not that clever.  In any case, we all tipped our hats and gave silent thanks to the Shady Dogs’ generosity. 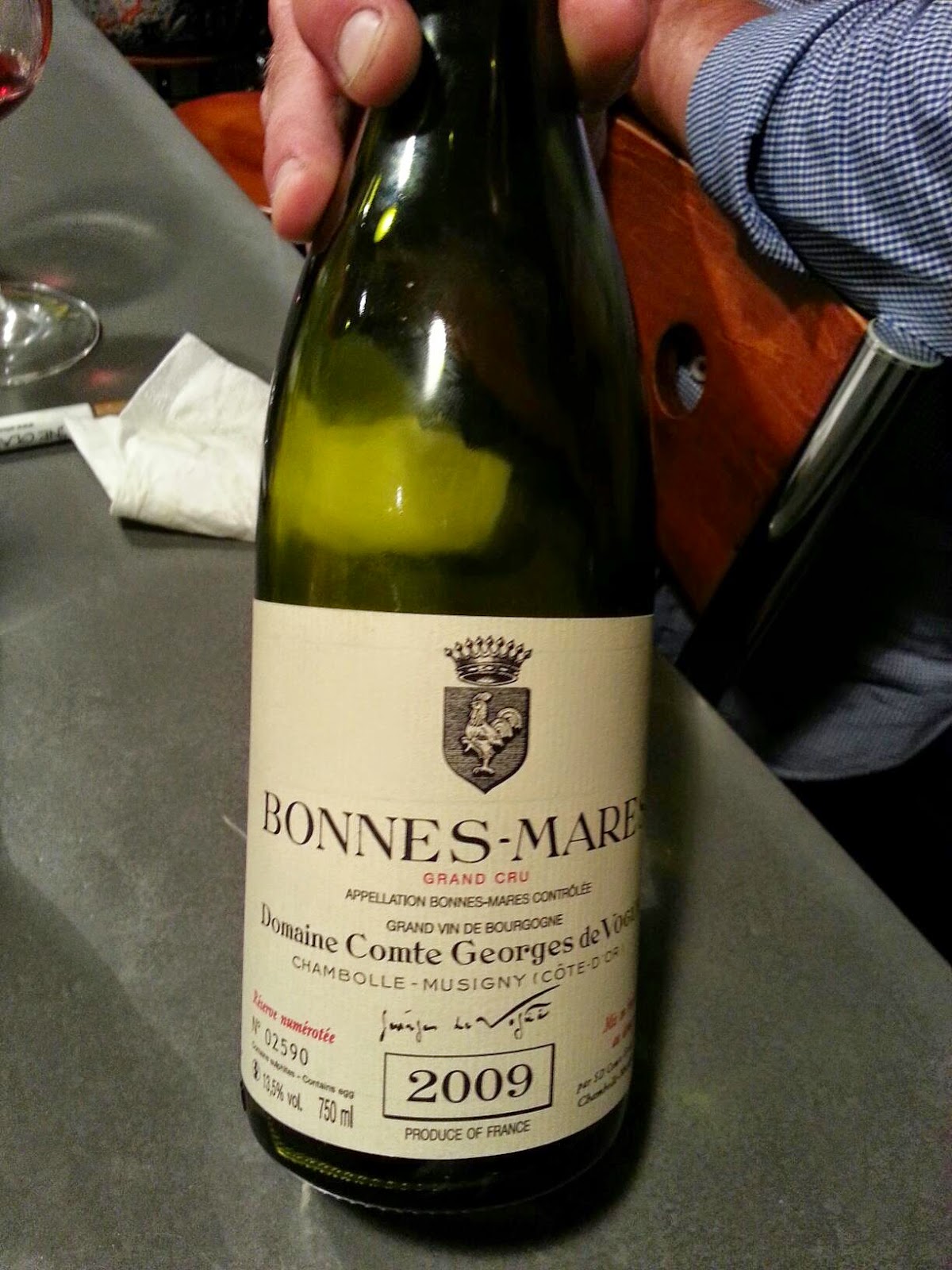 Then the one wine to rule them all on this night, a 2009 Comte de Vogue Bonnes Mares Grand Cru.  Opulence and succulence, with great clarity of fruit and the wonderful expression of blood, visceral bits and hints of fur from the northern Cote de Nuits as in Gevrey and Morey.  There’s no focussed beauty and perfumes of Chambolle in this, as Bonnes Mares is removed from the feminine site, and more into the animal and manly side.  Great structure married to richness, so that this is quite complete.  Like the Rousseau before it, there’s no over-richness of the 2009 vintage here.  Only masters can manage to prevail over vintage.  de Vogue is one of those masters.
Posted by Wine Noter at Tuesday, March 31, 2015 1 comment:

Racing Through a Range of Whites 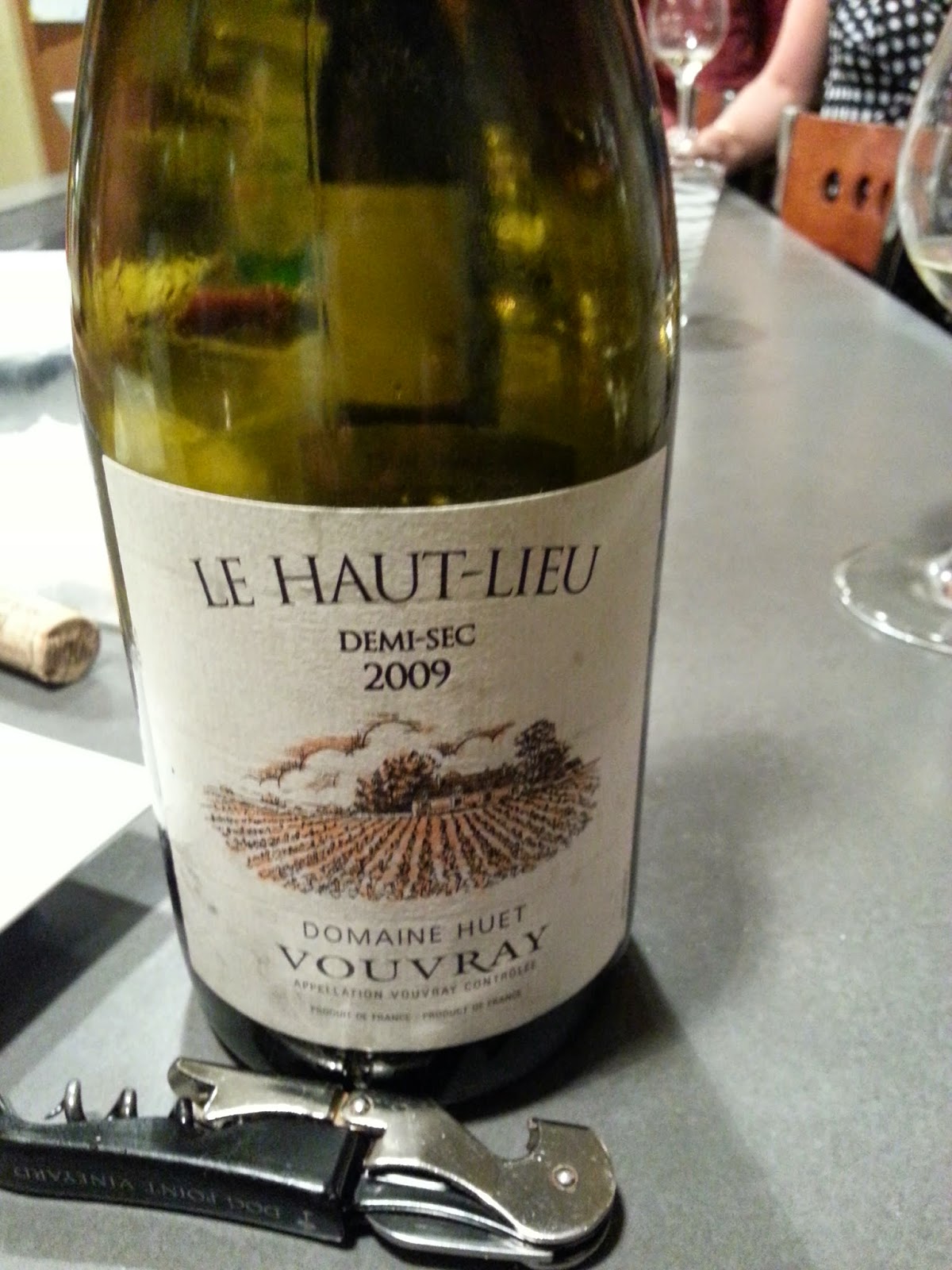 It was a bit like speed dating.  Here we were with the Shady Dog folk and they had so much wine to open and try.  If you stepped back, you may have missed a treasure.  Only if you are there will you have the chance of meeting the one that is special!  A progression of white wines, mainly racy and Chardonnayish came up in turn.  I’ve listed them in an order as they didn’t necessarily appear, just so I could organise it all in my mind. 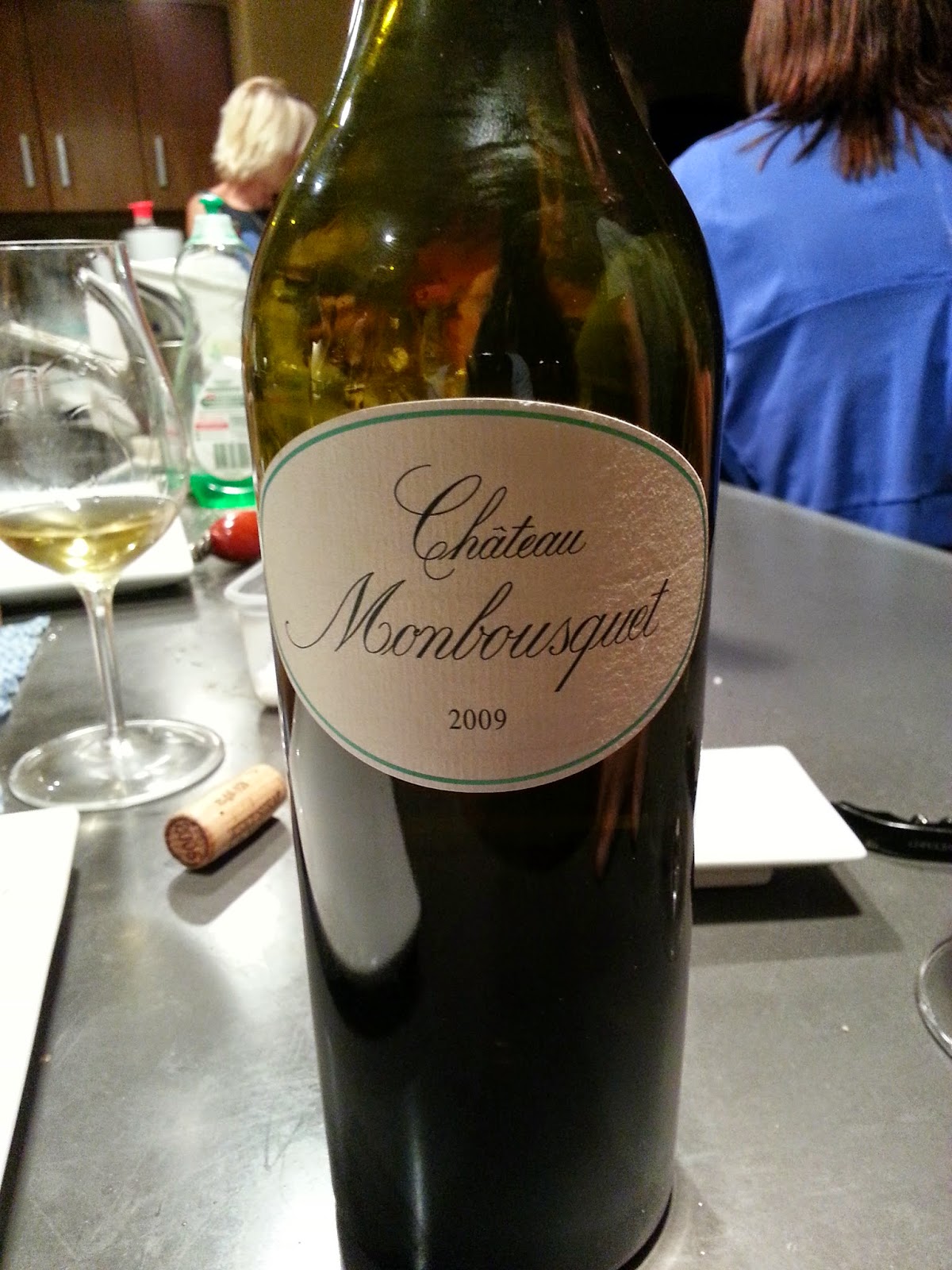 First was the 2009 Huet Vouvray ‘Le Haut-Lieu’ Demi-Sec.  Usually one of my favourites from this venerable producer.  I love the crystal clear white florals and the touch of honeysuckle.  Searing acidity has never been a problem, as balance has been the feature.  This bottle a little sacky and showing some sulphides.  Others saw it as complexity!  Then onto a 2009 Ch. Monbousquet Bordeaux Blanc, serious Sauvignon Blanc and Sauvignon Gris blend, barrel-fermented, lees work etc.  Very tight initially, but finally releasing it’s fine line of green stonefruits and herbs, with fine and refined oaking.  Some firmness of texture at the core, and great linearity, but just a bit too tight to really enjoy. 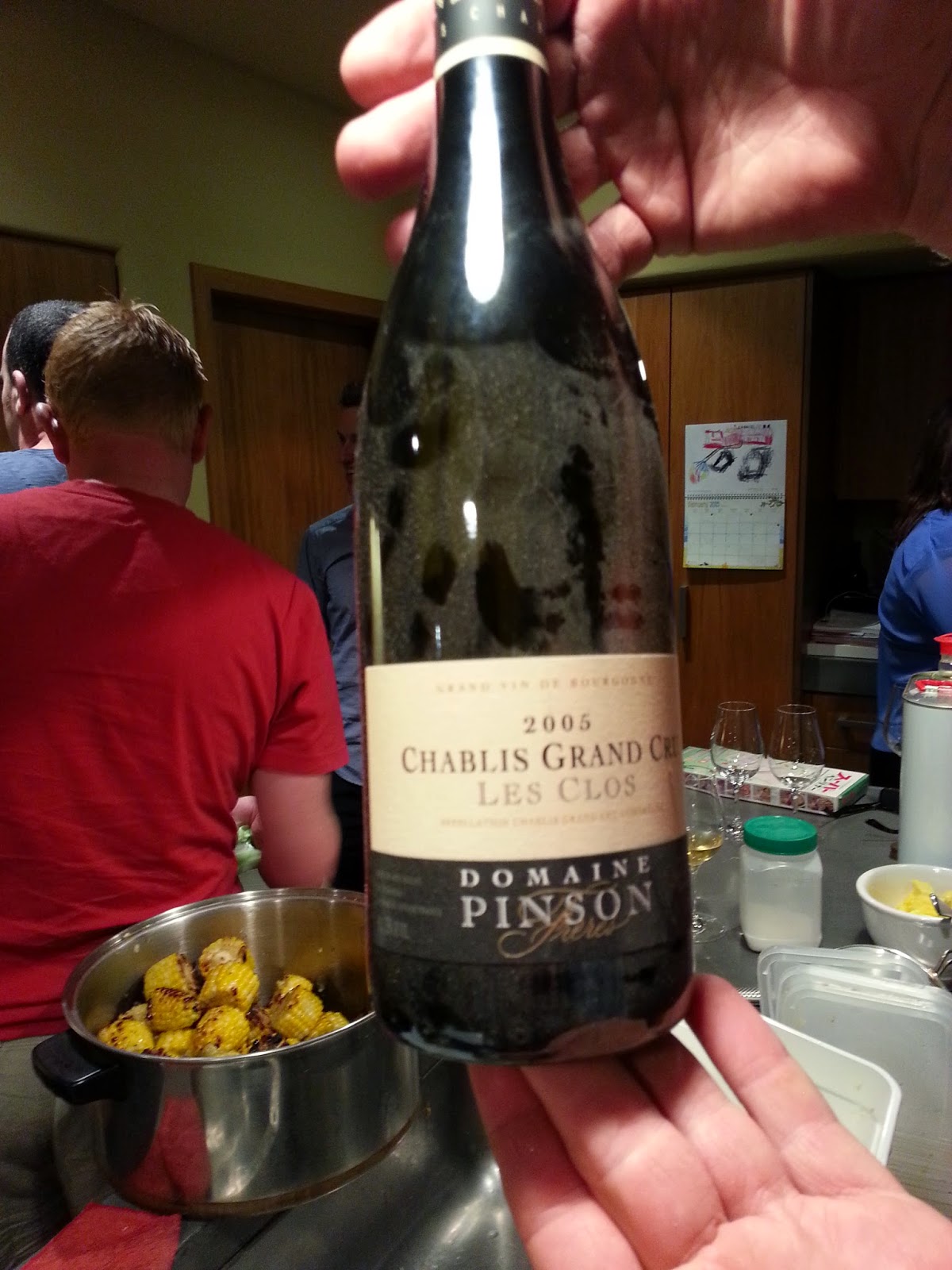 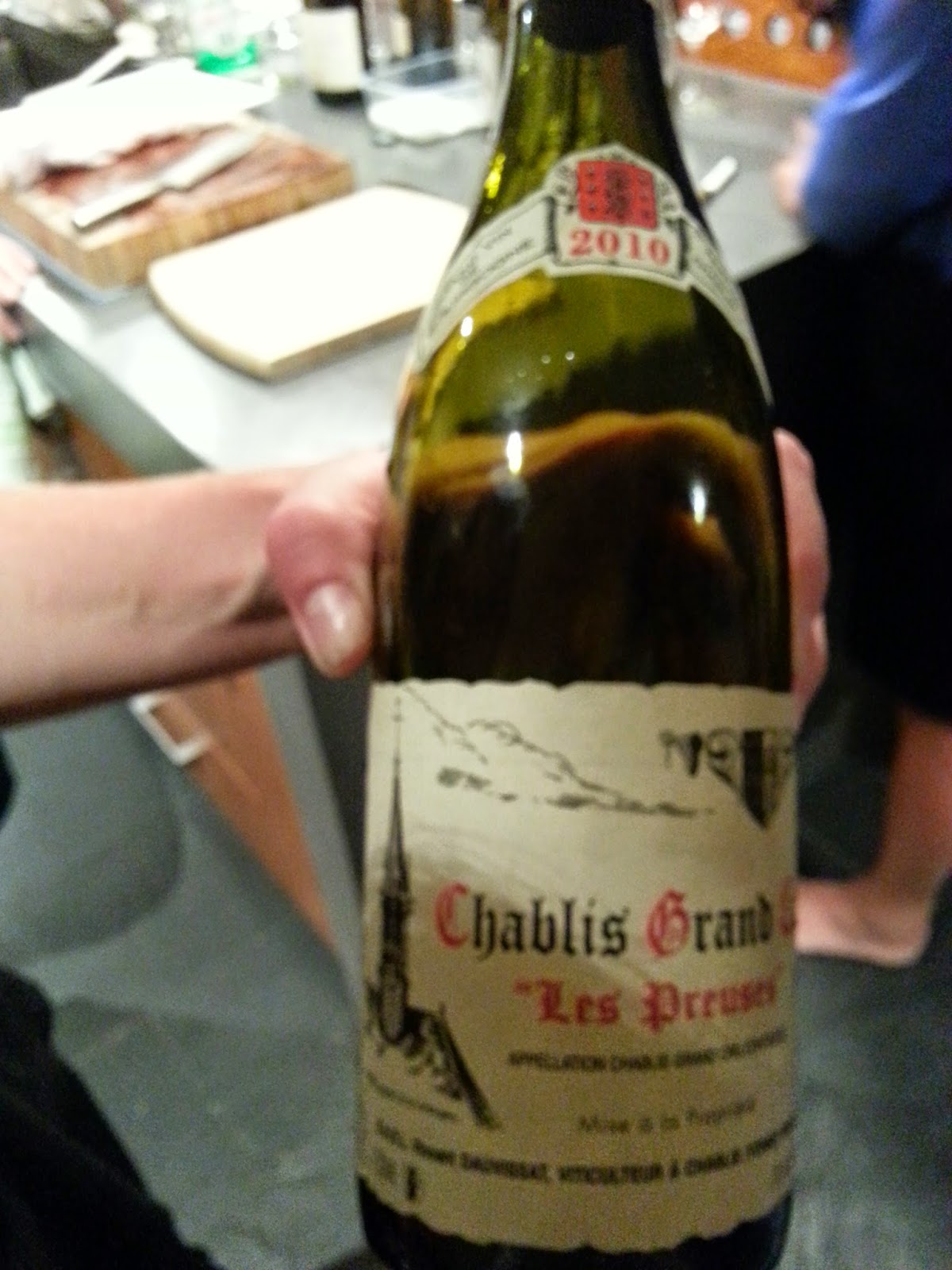 Then onto the Chablis bracket.  For starters, the 2005 Pinson Chablis Grand Cru ‘Le Clos’.  First impressions were that it was too old, with secondary savoury nutty/flinty/mineral/earth amalgam.  Not pretty and getting a bit stinky and decrepit.  But underneath it all, it had classical Chablis acid structure and drive.  Easy to move on, but for those who looked at it again, later, it cleared and cleaned up, the aromas becoming a little more defined, and a degree of freshness reappearing.  It welcome pleasure was the 2010 Dauvissat Chablis Grand Cru ‘Les Preuses’.  More what you’d expect, with everything in place.  Lovely white stonefruits, subtle flint and minerally acidity.  A little soft even, all nicely tucked in.  Everything perfect, and if you were critical, maybe a tad unexciting.  The idealist would say it was just right.  I vacillated between the two. 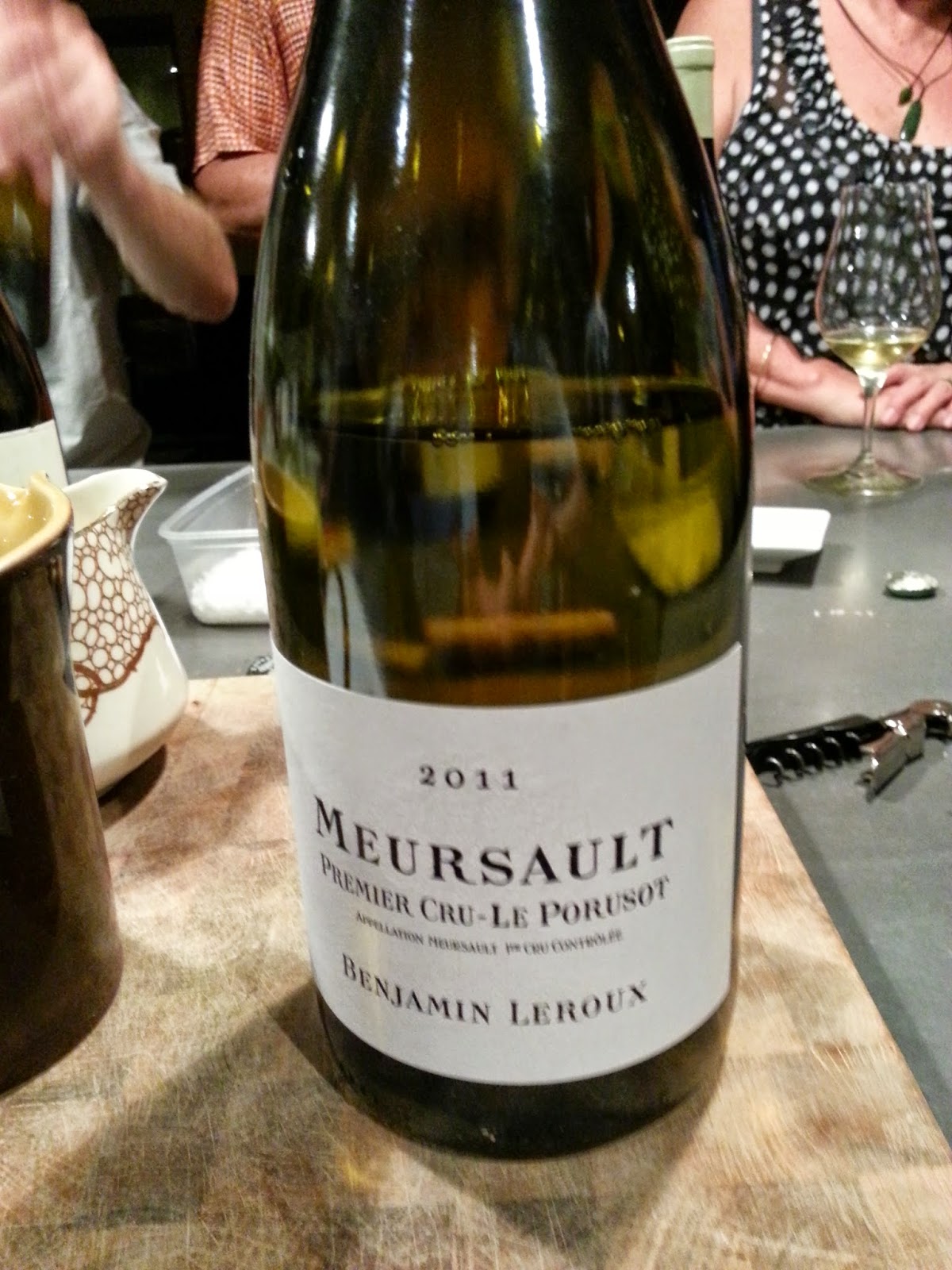 Finishing with the bigger Chardonnays.  The 2011 Benjamin Leroux Meursault 1er ‘Le Porusot’ from one of Burgundy’s young stars.  Contemporary stuff with gunflint galore.  Or is this minerality as some would purport?  I say it’s input.  This is tight and firm and full of promise, but doesn’t speak fullness, roundness and creaminess that Meursault has to me over my time of learning.  The Leroux signature is strong here.  But I liked it.  Finally a wine from an old friend, a 2009 Millton ‘Clos de Ste Anne’ ‘Naboth’s Vineyard’ Gisborne Chardonnay.  Fully developed and layers of complex stonefruits, nuts and oak with earth and minerals.  Not knowing what the ‘Naboth’ terroir was, I’d have an idea after this.  In vinous terms, at full maturity, with layers of savoury and secondary flavours, just starting to dry a little.  But a structured mouthful that deserves contemplation and food. 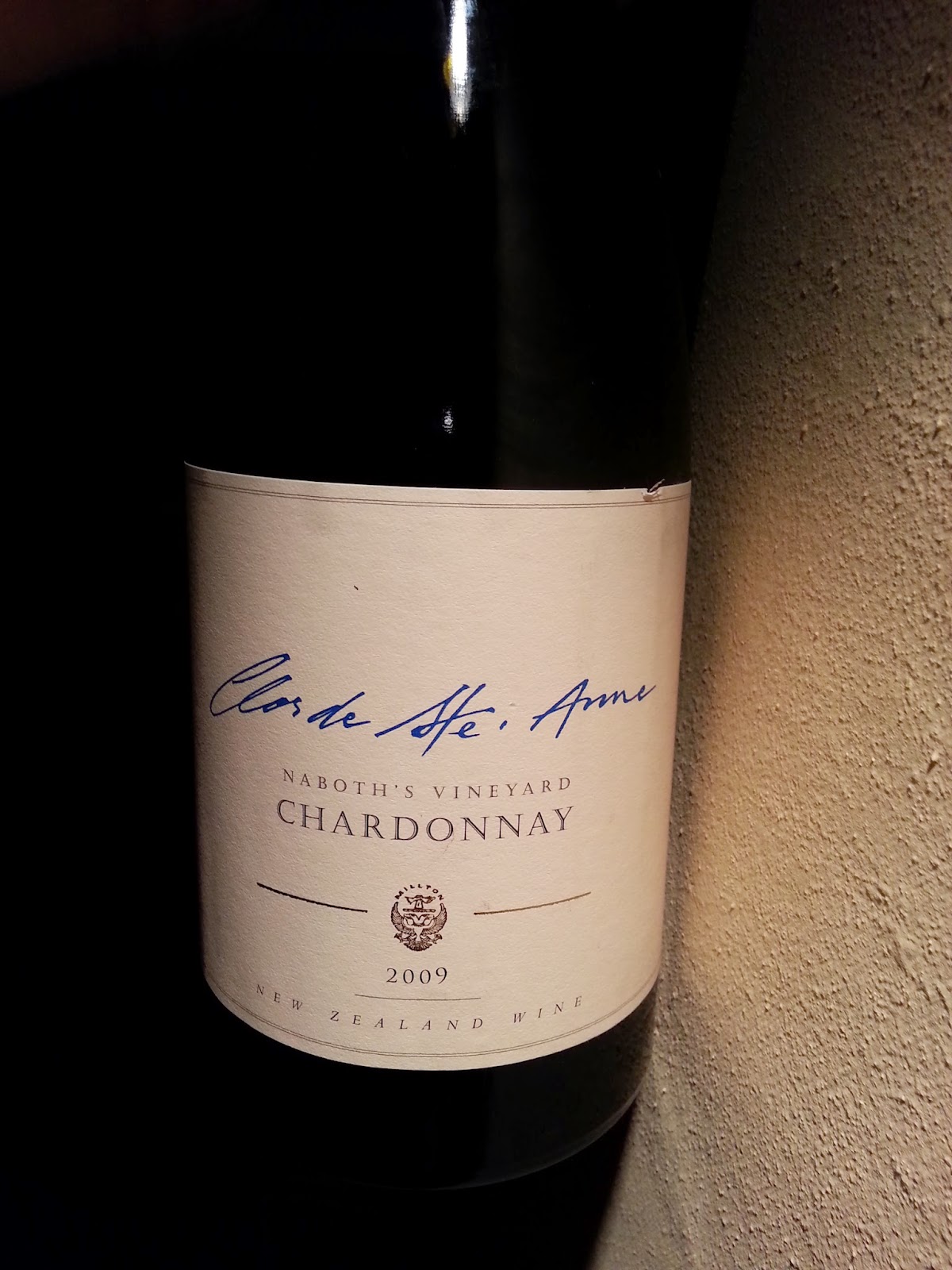 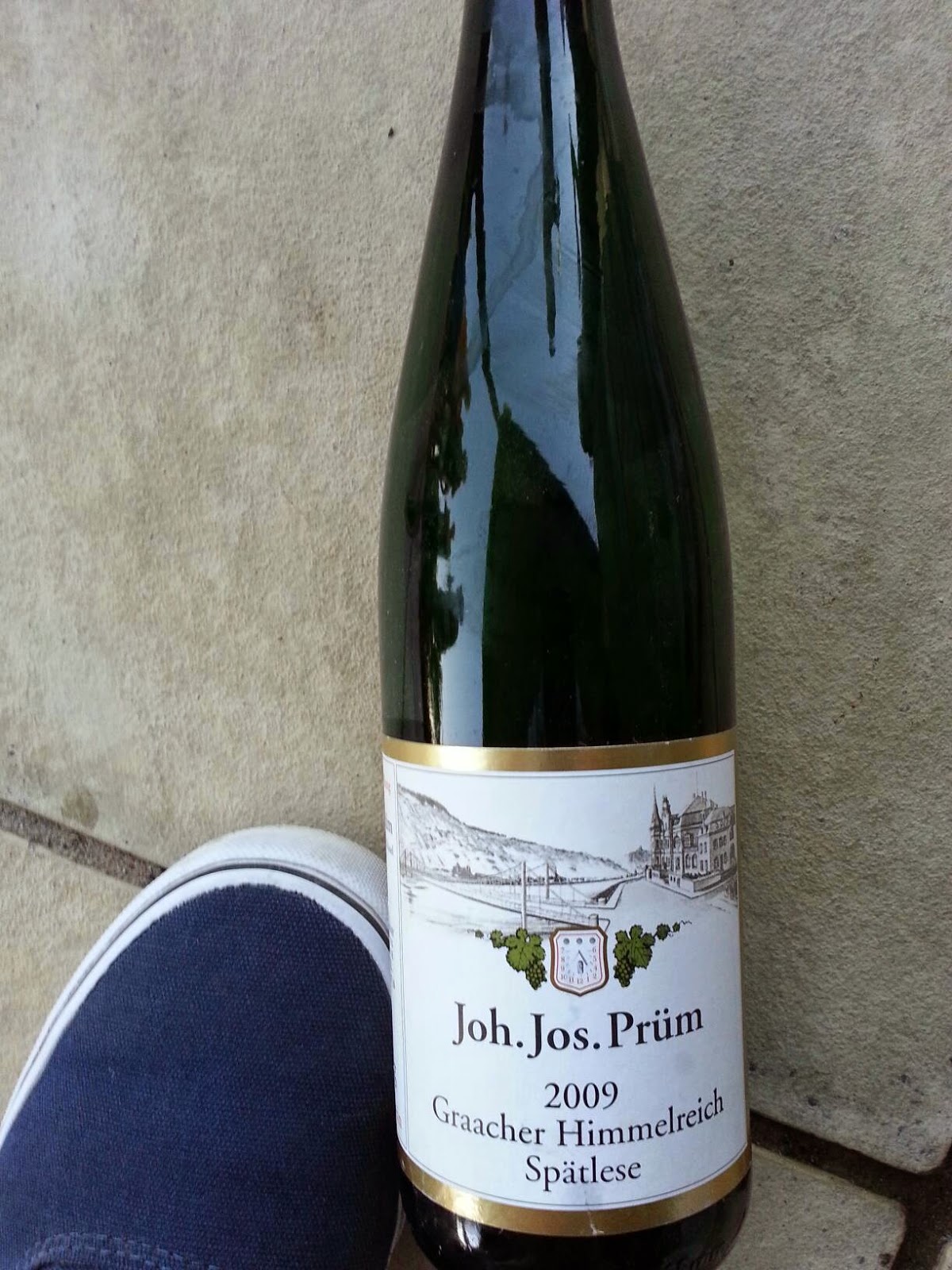 We love drinking wine Rieslings from the Mosel.  The wines are the epitome of delicacy, freshness, precision and richness, all bound and balanced together.  I get asked if there’s any one wine style I love more than others.  My answer is “none”, as I try to appreciate them all.  But if there is a wine style that gives me moments, it is Mosel Riesling.  SWMBO has no problem admitting these are the wines she loves.  I go with the flow.  The Shady Dogs put on a BBQ which began with a succession of Mosel Rieslings.  We had more than one moment tasting through the interesting array. 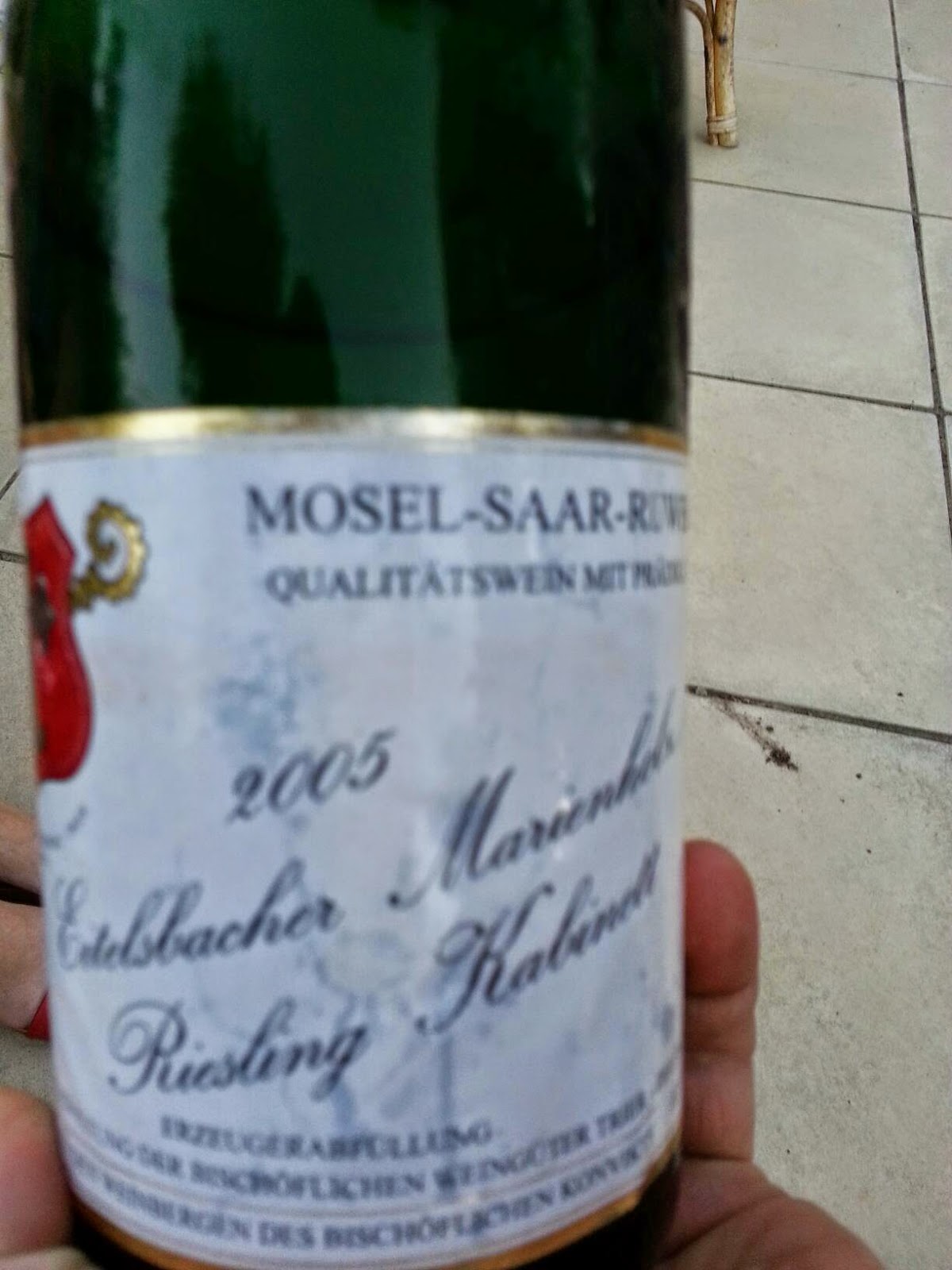 First up was one of the best of the night, a 2009 J. J. Prum Graacher Himmelreich Riesling Spatlese.  Notorious for their funky sulphide reduction in youth, these invariably develop gloriously.  This wine in transition, with some mineral, earth flint and stink.  But already the fruit richness and sugar richness coming to the fore.  Great body, and intensity, without being overbearing.


Moving onto the 2005 Bischoflisches Eitelsbacher Marienholz Riesling Kabinett, disappointing, maybe because it came after the J. J. Prum, which was a Spatlese too.  But this one more muddied and matty in exoression.  Softer and less sweet, and certainly not the cut.  Did this have cork issues, as there was a little mustiness, which we attributed to bottle development, at first?

The 2005 von Kesselstatt Graacher Domprobst Riesling Spatlese compensated, back to the expected clarity, focus and subtle richness.  More honied with hints of toast.  But still citrus, florals and limes.  I love von Kesselstatt for how that make it all so correct and e;legantlt down the middle of the path.  Maybe not the brilliance of say J. J. Prum, but classic stuff. 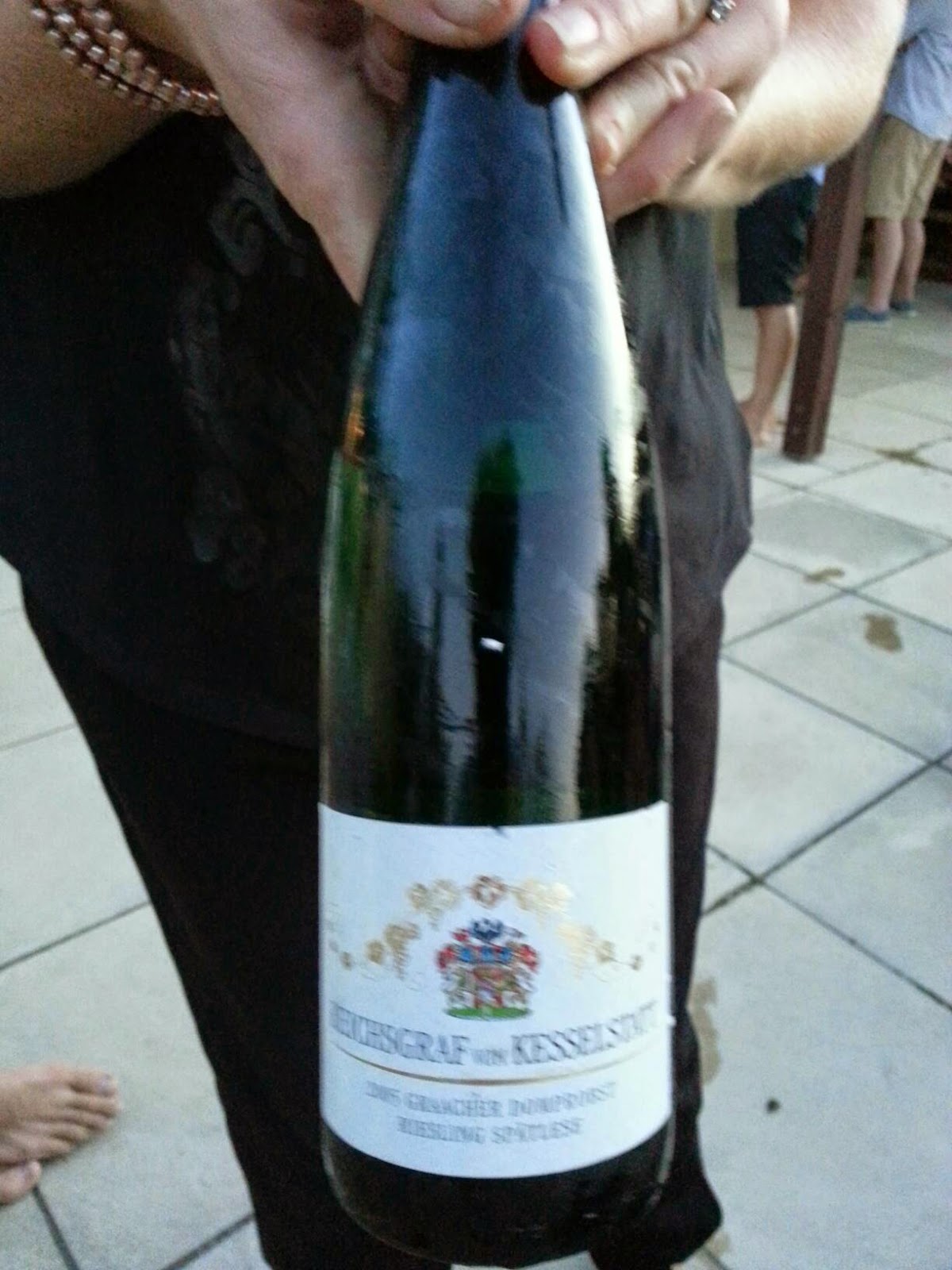 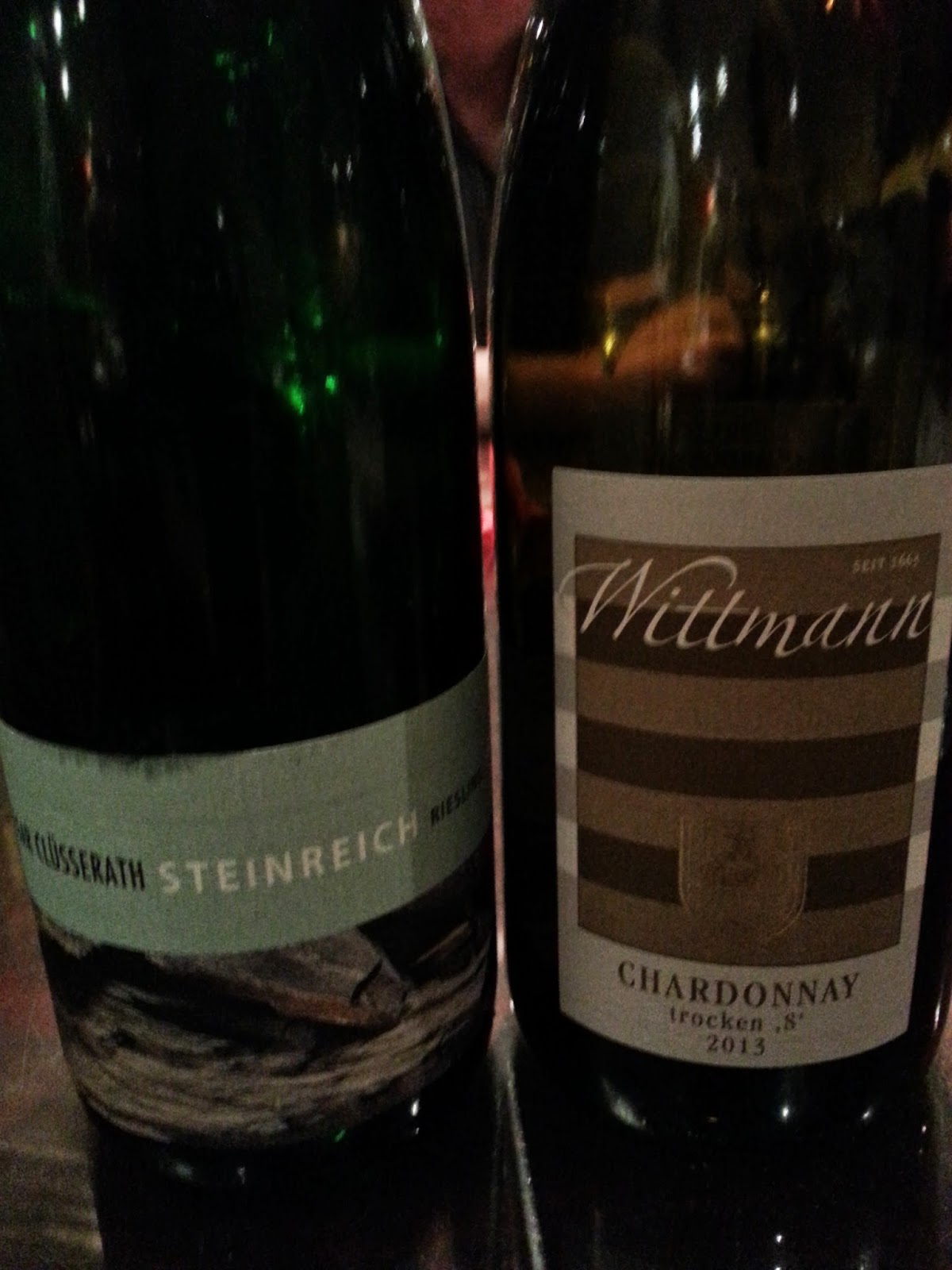 It’s easy to think that Germany is all about Riesling.  But the new wave folk are doing new things and seeking all manner of wider expressions.  Drier styles and other varieties, often from Burgundy are seen as ideal to try out.  The F-Man is a fan of these, and he’s always trying these out on us whenever we get together.  A delicious meal at the favourite eatery was accompanied by two interesting wines he brought along.  I’m sure the F-Man is playing with us, showing something unusual.  But also the wine producers here are playing too, to please themselves and their friends.

The first was the 2013 Ansgar Clusserath ‘Steinreich’Riesling Trocken.  This is an up-and-coming producer with good holdings in Trittenheim, making over the years a smart portfolio of classical Rieslings up and down the pradikat system.  They’ve made inroads into the drier style, made with a bit of input from wild yeast, lees and texture, but they remarkable retain a sense of both the old with the new.  This has a lively vibrancy and freshness with richness.  Delicious stuff.

Next was the 2013 Wittmann Rheinhessen Chardonnay Trocken ‘S’, grown on limestone-influenced soils.  This is one of Germany’s big name contemporary producers with Riesling, but as is always the case, everything they do is interesting and good.  This is no exception with a ripe and savoury citrus fruit character.  Nothing like white burgundy in reality, but it is different to any Riesling you’ll come across.  Good acid and an intrigue that keeps you coming back for more.
Posted by Wine Noter at Sunday, March 01, 2015 No comments: