It’s a bit irreverent, but SWMBO and I have called Grant Edmonds ‘Grunt’.  It’s also rather unfair, because he’s actually very articulate.  He is though, sparing with his words and his tone is very quiet.  However his winemaking is rather clever and articulate.  His and his wife Sue’s first own label ‘Redmetal Vineyards’ release was with the 1996 vintage.  Never one to mince words, it was all about Merlot, with anything else quite secondary.  I reckon he still has that tenet, but of course, time has mellowed him.  He’s accepting of Cabernet Franc and Syrah.  They are Hawke’s Bay classical varieties for sure.  Put forward Cabernet Sauvignon and Grant will grunt.  It just doesn’t ripen consistently to make it worthwhile having in the ground.  But he does use it, when it suits. 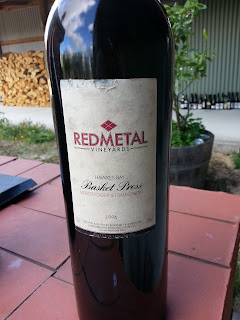 He gave me a pressie, way back when.  It was a magnum of his then flagship.  And at the A-Prentis party, we opened it – a 1996 Redmetal Vineyards ‘Basket Press’ Hawke’s Bay Merlot/Cabernet Sauvignon 1.5 L.  At 21 y.o., it was still on its maturity plateau.  Lovely ripe black plum and berried fruits, with just the right amount of savoury dried herb and earthy secondary development to give it a complex layering.  The fruit was still sweet, and the tannins sufficient in structure to give it the bones to keep on aging.  There was an underlying freshness, that indicated another decade of life was well within its capability – in magnum of course.  The Redmetal brand has had its ups and downs, due to the degree of attention lavished upon it, but it is returning to its former glory.  Grant will not be grunting much more.
Posted by Wine Noter at Thursday, November 30, 2017 No comments:

Our winemaking styles undergo a gradual creep as they evolve in this modern world.  It’s too easy not to go with changing goalposts, and be stuck in our rut.  But one must also be cautious not to whole-heartedly adopt new fashions and fads, as they fade away quickly, leaving you in an embarrassing place. 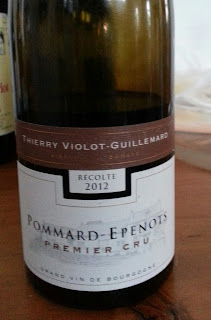 SWMBO and I were recently impressed with a 2012 Thierry Violot-Guillemard Pommard 1er Epenots.  Brought to dinner by the French Terry, this was a surprisingly modern interpretation of Pommard, an appellation best known for its sturdy, four-square wines.  The best Pommards have a richness which match the structure, so that they are not burly, but in essence, they still have an inelegant style to them.  They are among the bigger Cote de Beaune red wines, save those from Corton.  This modern Pommard had sweetly ripe fruit, and enough depth and fine concentration.  There was a degree of suppleness too.  Maybe a little difficult to see as the Pommard as we’ve come to expect, but better for it.  It was a more fresh and easier wine than the grunt of the past, and all the better for it.  Bring it on, I say.
Posted by Wine Noter at Tuesday, November 28, 2017 No comments:

Back to the Future 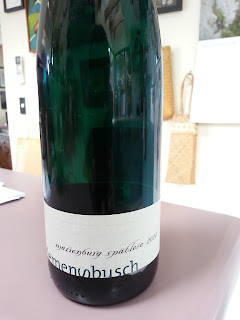 There was a time that German wines were predominantly dry.  Then developed the sweeter tastes of the world and the pradikat system to categorise the richer wines based on sugar levels at picking.  And as things cycle, we are seeing a trend towards the drier styles again.  As a baby boomer, I regard the sweeter-fruity-acid wines as my norm, but I admit I’m becoming increasingly enamoured by the Grosses Gewachs wines which not only espouse dryness, but also site.  13.0% alcohol is quite manageable and seems to be in balance with the greater textures seen in these wines.  But in my heart, I still love to drink wines with Kabinett, Spatlese and Auslese on the labels.  Maybe I’ve been seduced by sugar, but the acidity in these wines provide balance, and the fruitiness is a delight.  You can drink these wines anytime. 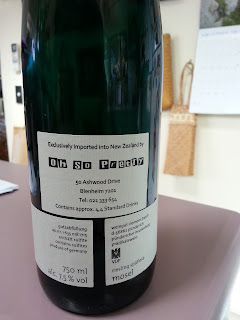 One of SWMBO and my favourite producers is Clemens Busch in the Moselle.  His dry style bottlings are fabulous expressions of site, and the grey, blue and red slate soils are demonstrated clearly in his top wines.  But I’ve gone back to the future with Clemens Busch as well, as he has the old modern style wines made too.  My latest favourite sipper is the 2014 Clemens Busch Pundericher Marienburg Riesling Spatlese.  Like many of the 2014s, the wine has a firmness to it.  It still needs time to open up.  But as earlier vintages we’ve tasted, it surely will.  It already has gorgeous floral and citrus fruits, with distinct slatey minerality.  There’s great fruit extract, but crisp and tight acid to balance.  It just needs to show a little more honied richness, and then it will be gorgeous.  I’m salivating just thinking about it.
Posted by Wine Noter at Monday, November 27, 2017 No comments:

We love having the I-Spy Man around for dinner.  Sometimes he brings his young daughters.  I must admit we have an admiration for young people brought up well, as we are proud of our The Young One.  At a certain age, they have the maturity and confidence of an adult.  They have the subtlety of good humour, the gravitas of understanding the serious things in life, and often show a sense of spice at the right moment.  So it is with Hex-Bex, daughter of the I-Spy Man.  She has a lovely maturity, and is not yet in the prime of her life – but try telling her that! 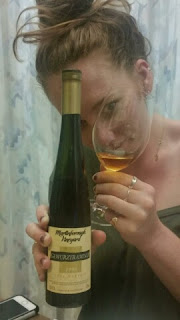 It was a pleasure to share a bottle of Hex-Bex’s birth year.  The 1996 Martinborough Vineyard Martinborough Late Harvest Gewurztraminer was certainly fully mature.  But it was past its prime of life time, unlike Hex-Bex, but certainly still very enjoyable.  Deep golden orange colour.  Aromas and flavours of burnt honey, orange marmalade, barley sugar, caramel and toffee.  Lovely unctuousness, and now just beginning to dry a tad on the finish.  Did anyone detect any spice?  Maybe some ginger.  A decadent dessert wine, made from botrytised fruit, picked at 33.5 Brix, fermented to 11.0% alc. and 160 g/L RS.  Beerenauslese standard, and the last Gewurztraminer from this producer.  We were treated.
Posted by Wine Noter at Wednesday, November 15, 2017 No comments:

A Flower for You 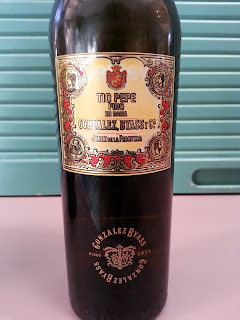 One of the best drinks to come our way was the Gonzalez Byass ‘Tio Pepe’ Fino En Rama Sherry.  SWMBO and I don’t drink a lot of Sherry, but when we do, we love it.  Sherry is the world’s forgotten great wine, and it’s a shame, because it offers so much diversity, interest, and pleasure, and truly is multi-faceted.  So when Gordy and Pia brought out this bottle, it brought a smile to our faces; it was like giving a bunch of flowers (which they did do, as well). 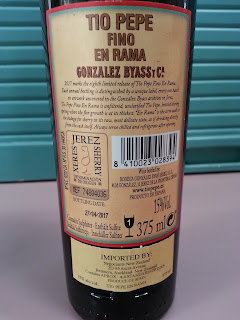 Essentially the ‘En Rama’ is Fino Sherry at its freshest and most pungent,  It’s bottled unfiltered and unclarified, and done so at the time when the flor is thickest.  It is Sherry at its most raw state, and strangely most delicate according to the makers, and they say it’s like drinking it directly from the cask.  For us, it was as they suggested the wine would be, but there was a density and good core to it.  Not really delicate, but with substance.  However, it retained stylishness, rather than elegance of finesse.  The pungent flor had a strong say, and yes, really pure in its expression.  At 15.0%  it’s a fine style of Sherry, but this is special with its depth of flavour and classiness.  This bottle from the eighth release, in 2017.
Posted by Wine Noter at Tuesday, November 14, 2017 No comments:

A Taste of Terroir

I know few people who are as keen to taste something different and new all the time as Gordy.  What makes him special is that he approaches each such wine with an open mind and a ‘glass half full’ attitude.  Too often, we come to see wines with preconceptions, and when wine doesn’t match up, it’s so easy to denigrate the new and unusual wine.  Not so Gordy, but it’s terrible playing wine options with him.  The wines are often so way out that variety and place are hard to pick. 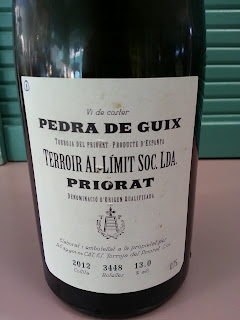 So it was with his bottle of 2012 Terroir al Limit ‘Pedro de Guix Priorat.  Whio could pick it was from a blend of Pedro Ximinez, Macabeo and Garnacha Blanc, from clay, alluvial and schist soil respectively.  I’m sure Priorat has all those soil types, but it’s not what it is best known for, as one thinks of volcanic black slate, also known as ‘llicorella’.  On top of that, it’s indigenous yeast fermented and aged in neutral oak.  The old vine character of plants 50-80 y.o. must come through.


SWMBO and I were totally bamboozled by it.  It had the taste of old world.  It was soft and amorphous , and lacked acid freshness.  But it had weight, mouthfeel and presence.  No identifiable fruit character came through, so I said Garnacha Blanc, and lo-and-behold, I was one-third correct!

What both SWMBO and I picked up was oxidation.  Researching the wine, winemaker Dominik Huber says this wine is “oxidative”, so we were on the right track.  But after these points we had no inkling at all.  We were somewhat glad when the identity was revealed and its make-up discussed.  It is a wine of terroir, but one of many facets.  The oxidation receded as it received more aeration and our attention.  I think Gordy was a little pleased and hopefully impressed with the wine and our limited, but perceptive performance.
Posted by Wine Noter at Monday, November 13, 2017 No comments:

If pressed, SWMBO and I will admit our love in wine is for Riesling, especially German Riesling.  It’s that special balance of fruitiness with acidity and sugar.  Few other wine varieties come close.  Albarino is similar, but usually has more drive, and not quite the finesse and poise.  The other variety than springs to mind is Chenin Blanc; the fruitiness isn’t quite the same, and the acidity is more in charge.  However we have had examples as delicious as any Riesling in our experience. 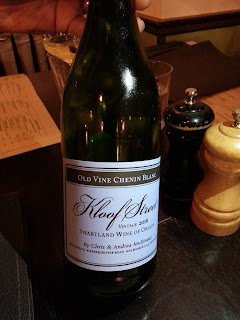 So when Gordy and Pia were in town, we went to a lovely eatery with a specially curated wine list by a resident MW.  Gordy and Pia knew exactly what they wanted, and knew it would tickle our fancy,  It was the 2016 Mullineux ‘Kloof Street’ Chenin Blanc from Swartland in South Africa.  It’s not the Mullineux’s top tier by any means, but the wines are very accessible as this was.  Simply, it was deliciously honied, as Riesling can be, but had that white stonefruit and floral edge in flavour that Chenin Blanc has.  The acidity was poised but not cutting.  A treat to drink, and surprisingly dry technically at 3.4 g/L, but the fruit richness makes it exotic and rich.  It’s not Riesling, but close in many ways.  I must admit that it’s pushed my image of Chenin Blanc up a notch, especially at this affordable level.  I’ve always had respect for the sweeter Loire Chenins that are called ‘honey monsters’.  This Mullineux is a ‘honey child’.
Posted by Wine Noter at Sunday, November 12, 2017 No comments: