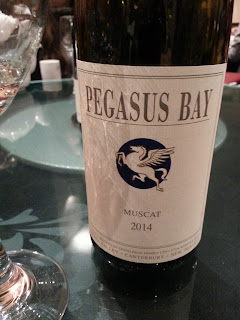 SWMBO attended the Pegasus Bay mail order tasting in December last year.  At this event the Donaldson family put out some rarities as treats for their loyal followers.  She was taken by the aromatic intensity of the 2014 Pegasus Bay Waipara Valley Muscat.  The Donaldsons only have a few rows and make only a few hundred litres for family, cellar door and of course mail order customers.
Then earlier this year we visited the Pegasus Bay winery where Mat Donaldson took us for a little tour of the vineyard.  Vintage was 90% done with Riesling and bits and pieces still to bring in, including the Muscat that would make the 2016 vintage wine.  We tasted the grapes still on the vine.  Delicious and unique was the verdict with the Young One and Jo-Lo particularly impressed.

So it was dinner time recently, and it seemed the ideal time to bring out the 2014 that SWMBO had acquired.  We started with Riesling, then the plan was to have the Muscat before moving onto Chardonnay.  The Muscat stopped everyone in their tracks.  The power and intensity of the aromas and flavours was sensational.  Raisins and grapes with musk and flowers.  Very Alsace-like and pretty much dry.  It was unexpected power, and indeed too much for the meal of Asian design!  Maybe a smelly cheese would work better.  We have more bottles to try this out.
Posted by Wine Noter at Saturday, July 23, 2016 No comments:

The First and he Latest 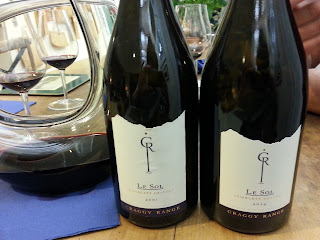 Wine styles undergo perpetual development and evolution, regardless of the producers’ desire to remain stable.  Claret is the classical example where for decades the wines have remained elegant and the Left Bank wines especially showing a degree of cooler spectrum greenness.  Yet this most traditional style has moved with the times.  Fruit has been picked riper, alcohol levels have risen, and the wines are now more concentrated and carry more oak.  This movement in style has been recognised, and steps taken to reverse the trends, but essentially the modern classical claret is a different beast to that of old.


With The Young One and Jo-Lo in town, we opened two wines to show development and evolution of style.  The very first Craggy Range ‘Le Sol’ Gimblett Gravels Vineyard Hawke’s Bay Syrah made, the 2001, alongside the latest release the 2014.  Craggy Range would be the first to admit that their initial releases were designed to be show-stoppers or statement wines.  “We have arrived!” was the message.  But as time has progressed, the recognition that elegance and finesse gave more drinkable and enjoyable wines came to fruition with the latest wines quite different to the earlier wines.

The 2001 I still very dark, near impenetrable, but clearly with some dark brown hues to the black-red.  On bouquet, very densely pack with volume, breadth and depth.  Black fruits now becoming savoury with secondary and tertiary aromas and flavours.  But solid, weighty and immensely concentrated, the tannins rounded for sure, but the size of mouthfilling flavours so striking.  Not so much robust or solid, but just with so much presence.  Very complex now, but this will drink as it is for another decade.  Then the 2014.  Not a small wine either, and with considerable and significant extraction, but the tannins very fine grained.  What this had was freshness, floral lift and bright acidity and a refreshingly succulent mouthfeel.  Sweeter in its finesse and elegance, and in a way far firmer than the 2001, but with refinement, perfumes and style.  This modern wine was ‘finer’ for sure, but not lacking or giving anything away to the older.  But the enjoyment level was a tad higher.  Overall, there was a house style and varietal nature that was identical.  But new and fresh won the day for pleasure, and the older and mature wine still a statement.
Posted by Wine Noter at Wednesday, July 20, 2016 No comments: