It was on discovering that The Prince wasn’t familiar with the big named Krug Champagne that inspired SWMBO and I to bring a bottle to the next dinner party he was in attendance.  Well, actually, it was rather self-serving, if you excuse the pun.  We actually hadn’t tried Krug Champagne for a little while, and it was an ideal opportunity to reacquaint ourselves.  The dinner party hosts, though very familiar with a wide range of wines, as well as the other guests, had not partaken of Krug for some time as well.  I suppose it is also partly the cost of the wine, or at least perceived cost, that makes people think twice about buying and opening the wine.  Sometimes, you just bite the bullet and go for it… 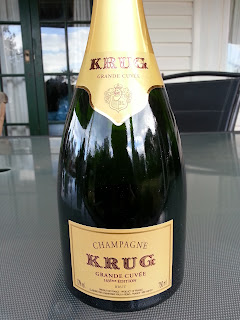 I must say that I was pleasantly surprised with the price of the NV Krug ‘Grande Cuvee’ 163eme Edition Champagne Brut when we popped into one of the local quality wine merchants.  Having read about the cost of many of the deluxe Champagnes soaring in cost, this was relatively affordable.  Maybe about two and a half times the normal retail cost of most grande marque non-vintage wines.  After all, Krug has always positioned its ‘Grande Cuvee’ NV as a prestige wine, in fact a ‘multi-vintage’.  So out came the wallet, and the deed was done.  Both SWMBO and I had salivating palates in anticipation!

At the dinner party, it was served at the appropriate circumstances and time, after another Champagne, of fine quality, but Chardonnay-based.  The Prince had a gleam in his eye, and knew the significance of the bottle, and our intentions to give him a taste of something special.

In retrospect, both SWMBO and I were somewhat underwhelmed by the wine on initial taste.  Relatively quiet and indeed elegant.  Subtle in aroma and flavour, you had to search for its goodness.  This was not ideal…  Our previous experience gave us a wine that was instantly bold and mouthfilling with layers of complexing flavours, with a distinct oakiness apparent.  Our previous history with the wine told us that all of its out-there componentry would settle into each other, resulting in exquisiteness.  So this new bottle was not like that at all.  But slowly and surely, the wine grew in detail and interest.  The yellow ‘Pinot’ fruit built in presence, and so did the autolysis, and complex interactions.  Wonderful depth and presence, and refined mouthfeel.  It was a wine that needed experience and a degree of patience.  In the final analysis, it delivered all that was expected of it, if you gave it the chance to do so.  Some of the tasters had moved onto other wines, and may have missed the point.

Just a little more tech info was obtained by scanning the QR code on the label.  This bottle was a blend of 37% Pinot Noir, 32% Chardonnay and 31% Pinot Meunier.  A blend of 183 wines from 12 different vintages, ranging from 1990 to 2007.  It spent 9 years on lees and was disgorged in the winter of 2015/2016.  So wrote Eric Lebel, the Krug chef de caves.  It’s amazing that technology gives us the opportunity to discover this detail.  Overwhelming, in fact.
Posted by Wine Noter at Wednesday, January 17, 2018 No comments:

There is a move around the world to make wines more elegant, especially in regions that are known to consistently produce bottlings that are big, ripe, heavy and well-extracted.  There are a number of reasons, based on accessibility and drinkability, but also on marketing, to assist turning over stocks.  Most consumers don’t cellar their wines for very long nowadays, and many wine aficionados just don’t have the space or conditions to cellar wine in.

There are a number of traditional producers who just won’t change.  Not because they can’t or cant’ be bothered, but more for maintaining the style they are best known for.  Penfolds ‘Grange’ comes first to mind.  A modern, skinnier, ‘elegant’ ‘Grange’ will not be true to its history and style.  There are some factors such as bottle-aging and the complexities derived from longer maturation that can’t be denied as not being reproducible by more elegant and approachable wines which develop to maturity more quickly.  So the more modern wines can lose out on extra detail and interest.

I’m glad that Yalumba haven’t mucked about with the style of their flagship ‘Signature’ wine.  It’s usually an approximate equal blend of Cabernet Sauvignon and Shiraz, from Barossa fruit, and maybe some Eden Valley fruit – which is still technically Barossa.  The fruit is picked as the most typical and flavoursome available, and the resultant blend is given plenty of traditional barrel aging.  At its best, it is full, dark, blackish and dense with very ripe, but not over-ripe fruit.  There’s plenty of structure and it’s designed for aging.  And it ages extremely well, 20+ years easily within its reach.  And it develops layers and layers of complex flavours. 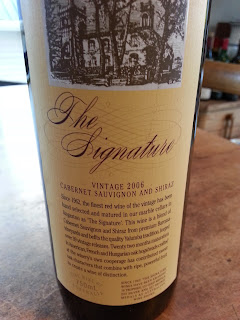 On a special occasion with ‘The Prince’, SWMBO and I opened our last bottle of 2006 Yalumba ‘The Signature’ Barossa Cabernet Sauvignon/Shiraz.  Each year is a tribute to someone important to Yalumba, and for this superb vintage, the signatory was Sales and Marketing man Ralph Dunning.  I’d met the man and was taken by his professionalism as well and character and humour.  A real personality, who spent 26 years with the company.  The wine was still an infant in many respects.  In its youth, it was sweet and plush and our there with ripeness and structure.  Now, after 10+ years, it was still deep and dark, near impenetrable.  If anything it had closed-up shop a little, with the exuberance of youth gone, but the gravitas of some age appearing.  Immense depth and concentration of ripe black fruits with liquorice, black pepper and spices, along with complexing savoury game-nuanced earth and mineral secondary elements just peeking through.  The detail of these nuances were overlaid by the fruit still.  The structure and grip, and body suggest it has another two decades ahead of it.  The wines of the more recent years – and I’m meaning the last 20, will age even better than the first wines, initiated in 1962.  This 2006 aged 22 months in American, French and Hungarian oak hogsheads. 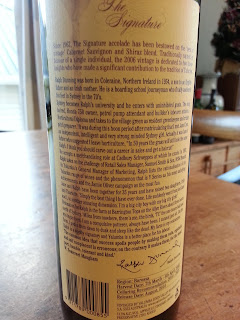 Most of the time when we go out to dine at a restaurant we have no real problem choosing a wine,  Both SWMBO and I are pretty relaxed and accepting of any wine as long as it’s not faulty, or showing nasties such as brett.  Occasionally it is a challenge, as some wines hare scary because of the unknown.  They invite you in for several reasons, but you know they may not give that much enjoyment in the final analysis. 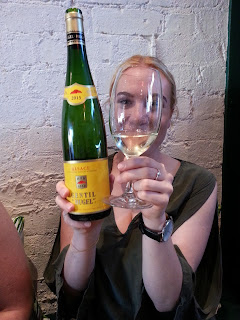 So it was at a newish and exciting eatery, serving delicious food, but with a limited wine list.  The wine list was well chosen in many respects and indeed was interesting.  We were there with the I-Spy Man, the Plate-Licker, and their two daughters Hex-Bex and Jemma Dilemma.  And there was a dilemma: Did we want to have an ‘orange wine’ from a reputable producer, of play it safe?  We took the latter course, picking the  2015 Hugel ‘Gentil’ Alsace.  A bit of a ‘bitser’ of a wine with Sylvaner, Pinot Blanc, along with the noble Gewurztraminer, Riesling and Muscat.  A dry wine at 4 g/L RS, but the overall nature is indeed ‘gentle’.  Soft and subtle, with an inkling of all the noble varieties, but evened out by the more settling Pinot Blanc, but with enough gutsiness from the Sylvaner.  The latter variety can be prone to coarseness, but handled by the venerable Hugel firm, in this wine it is quite ‘gentile’.

In some ways, it reminded us of Jemma Dilemma, with a strength and boldness of character.  Out there for sure, but never coarse.  A little underlying spice and fire (the Gewurz), with the enthusiasm and energy of youth (the Riesling), and an engaging, up-front friendliness (the Muscat).  The wine went down easily and was the right choice; it was a delicious treat.  So we thought also of Jemma Dilemma. She was lovely, scintillating company, along with her sister Hex-Bex.
Posted by Wine Noter at Tuesday, January 09, 2018 No comments:

Pale but not Insignificant

If you’re looking at superior sweet wines, the botrytised role models are German Riesling or Sauternes.  If you’re reasonably broad in your experience, then Hungarian Tokay is on the radar, but the style is funky.  We tend to forget that sweet wines made from desiccated grapes are a major style, but recognition has paled into insignificance.  But it shouldn’t be the case, as such wines are just as valid, and a much larger amount of sweet wine is made this way than is realised.

In Central Otago, making high quality sweet wine just isn’t feasible in the usual parameters.  Botrytis just doesn’t appear with the regularity that is desirable.  And even just hanging the fruit out longer isn’t viable due to the extreme conditions that often prevail at the end of the growing season.  So Paul Pujol of Prophet’s Rock drew on his experience making sweet wines overseas, and talking and tasting them, and decided it was quite likely that a dried-fruit style would be possible in Central Otago.  So for 2016, he made a Pinot Gris Vin de Paille – a straw wine where the grapes are dried on straw mats, in this case in the shed at Prophet’s Rock.  He was very aware of how easily things could literally turn sour, so great care and cleanliness was critical. 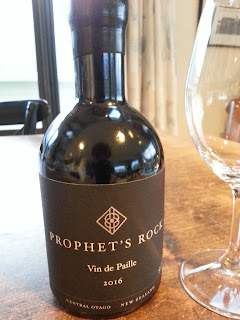 The result is an absolutely delicious wine.  The 2016 Prophet’s Rock Central Otago Vin de Paille is pale golden-coloured, and has aromas and flavours of ripe tropical fruit with honied notes.  There’s a touch of nectar. And the mouthfeel has viscosity and unctuousness.  There’s marmalade, exotic spices and some caramel.  And if one thinks hard, maybe a touch of straw.  The Pinot Gris grapes were dried for 45 days and fermented over 13 months.  It’s 11.5% alc. and 170 g/L RS.  Only 765 bottles of 375 ml capacity were made.  SWMBO and I had to share it, and it was the I-Spy Man and the Plate Licker who were the beneficiaries.  Straw wine – bring it on!
Posted by Wine Noter at Friday, January 05, 2018 No comments: