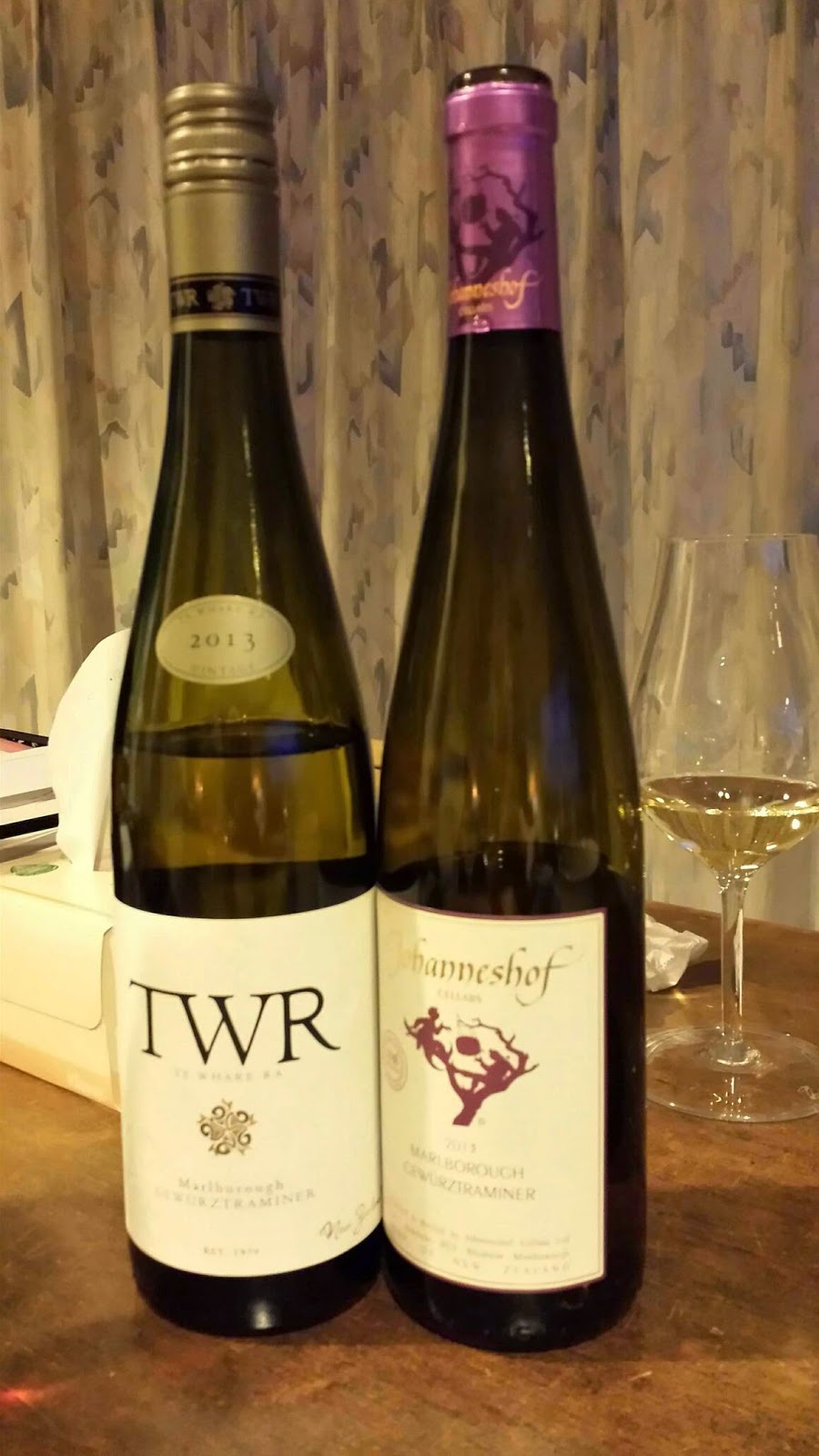 We love it when The Chairman is in town.  There’s quite a bit of history and we talk about old times and times moving forward.  He’s a very knowlegeable man when it comes to wine, but he never makes discussing it too involved.  A simple and thoughtful comment on how he sees it is enough.  There’s nothing to argue about, and you wouldn’t want to in any case.  What’s more, he’s a magnaminous soul, allowing each to have a say and opinion, even if they are wrong.  But he lets you know, sensitively and concisely, often with just a word, if you are on the wrong track.

We took the spicy route with a comparison of two Marlborough Gewurztraminers.  Not the most fashionable grape and from a region better known for other varieties.  But these two are among the best, not only for Marlborough, but for New Zealand.  I adore the 2013 Te Whare Ra Marlborough Gewurztraminer.  It’s all about sheer finesse of richness.  Old vines, 34 y.o. endow the wine with a subtly unctuous and seamless texture and great presence and concentration.  Yet there’s a power that belies its elegance.  SWMBO and I are besotted with this.  But The Chairman could see the alcohol and a touch of heat.  He’s right of course, but the wine still has us under its spell.

The comparison was the 2013 Johanneshof Marlborough Gewurztraminer.  It is equally delicious.  A more opulent and up-front wine, bolder in spicy and exotic expression.  This is the ‘out-there’ style we get knocked-out by.  There’s so many wishy-washy examples out there, and this wine reminds you what Gewurztraminer is all about.  A little more grainy and textured, the phenolics noticeable.  But then the fire and drive a little more harmonious and balanced.  The Chairman preferred this, marginally.  A draw in the end, and two wines to spice up our evening.
Posted by Wine Noter at Friday, June 27, 2014 No comments: 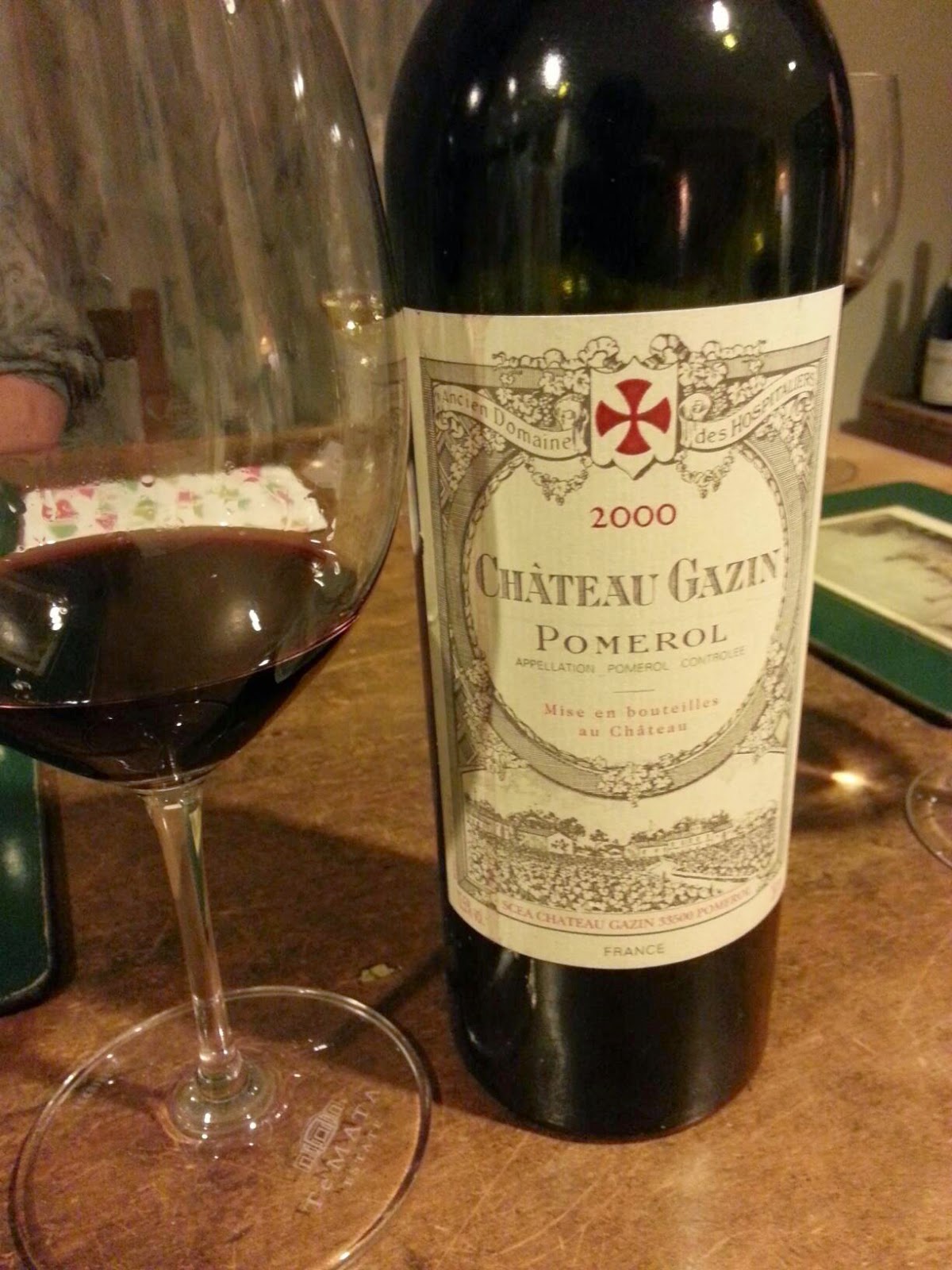 It’s a wonder to think how good wine aficionados can gaze into the crystal ball and successfully predict how well a wine will develop and age. We all do it, and there are many guidelines one picks up in making a forecast.  Much of it is the history and culture that surrounds certain wine styles, regions and grapes that has been accumulated as common knowledge and consistency.  A full understanding of the growing season helps enormously too.  There’s nothing like plain old experience.

The I-Spy Agent shared a bottle with us.  It was a wine that he predicted would last several decades, so SWMBO and I were privileged that he broached it with us, much earlier than how long it might last.  The 2000 Ch. Gazin Pomerol opened at one and a half decades would not be a waste, as at around 10 years, good clarets can begin to show their true personality.  A great vintage to celebrate the turn of the century and the millennium, the 2000s were deemed suitable for a very long life at their release.
The I-Spy Agent acquired this bottle as one that he believed would stand the test of time.  Still black-hued red, this was compacted and concentrated, but oozed classic claret aromas and flavours.  Firm tobacco, plum and currant notes, as though not long in bottle.  The faintest suggestions of secondary dried leaf, and a touch of earth, and a hint of game.  Fine-grained, but massive fruit and tannin extract, and immense density.  But with the finesse to allow a modicum of accessibility.  Merlot for sure, maybe a Graves St Emilion was my guess.  And I would have said younger than its years.  Totally enjoyable, yet enduring, and understandable, but still with a lot more to emerge.  This will keep another three decades…
Posted by Wine Noter at Friday, June 20, 2014 No comments: 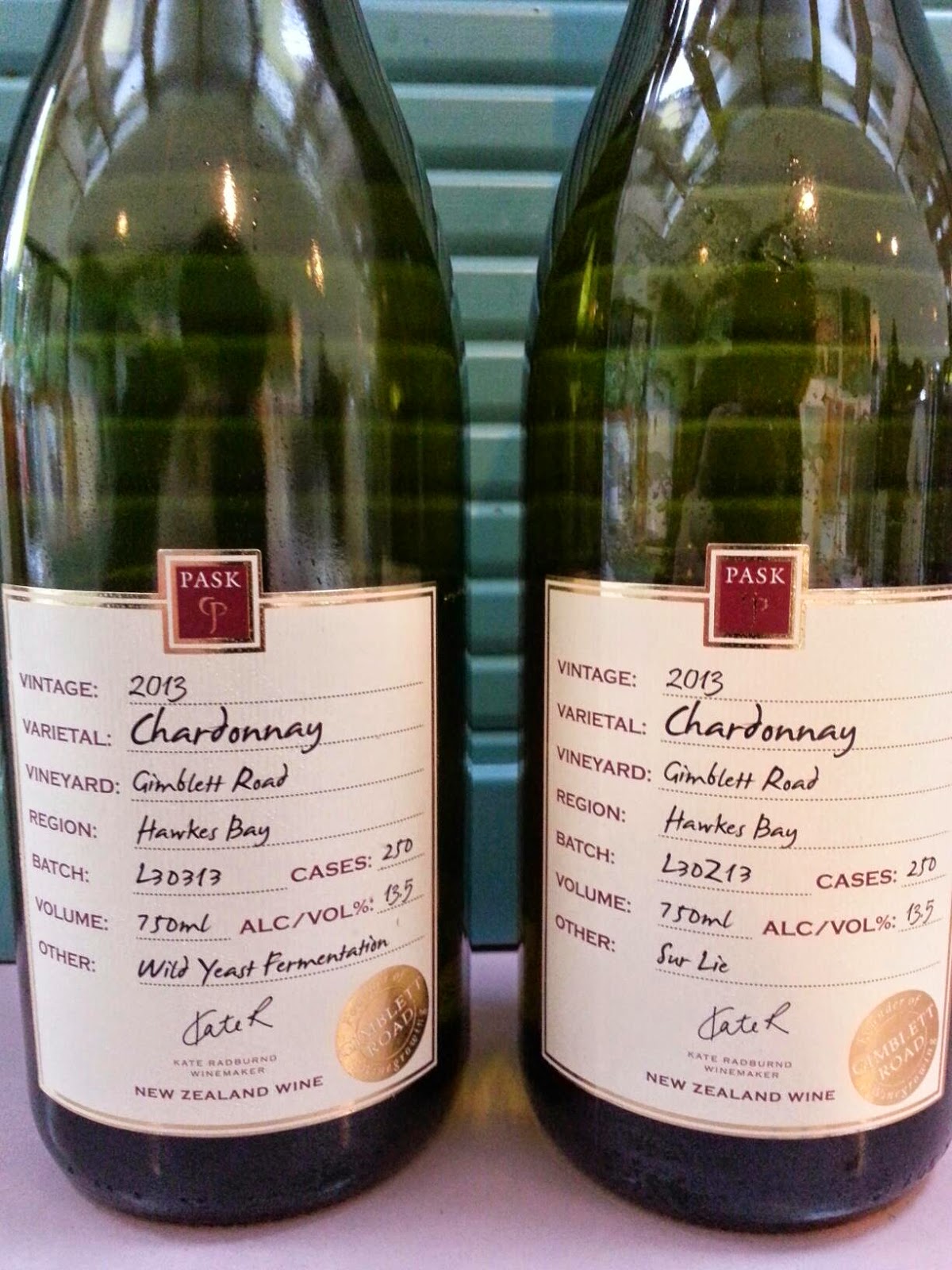 As a parting gift, SWMBO received a pair of wines from The Chairwoman in recognition of services carried out over the years.  The wines were a fascinating couple to compare against each other and learn a little more about technicalities.  In this world of wine, there’s room to be a little geeky, though we are not generally of that ilk – well certainly not SWMBO.  We recognise the overall view that it’s a drink, made to enjoy, and that as drinkers of wine, we all have differing levels of interest.  One’s culture and way of appreciation of wine can’t be imposed on others.
Having stated that, the 2013 Pask Gimblett Road ‘Wild Yeast Fermentation’ and ‘Sur Lie’ Chardonnays were wines to compare, contrast, analyse and learn from.  What role can yeast play besides the obvious conversion of sugar to alcohol (+CO2)?  We were surprised about how subtle the flavours were on the ‘Wild Yeast’ wine, delicate smoke characters, but what was noticeable was the increased texture through the palate.  The ‘Sur Lie’ wine was more pronounced in the nutty, yeasty flavours, but smoother and more acid slippery.  We drank both, and took our time to enjoy both bottles, with some help from the I-Spy Agent, and we all slightly preferred the ‘Sur Lie’ wine.  We’ll need to repeat the exercise, of course…
Posted by Wine Noter at Friday, June 13, 2014 No comments: 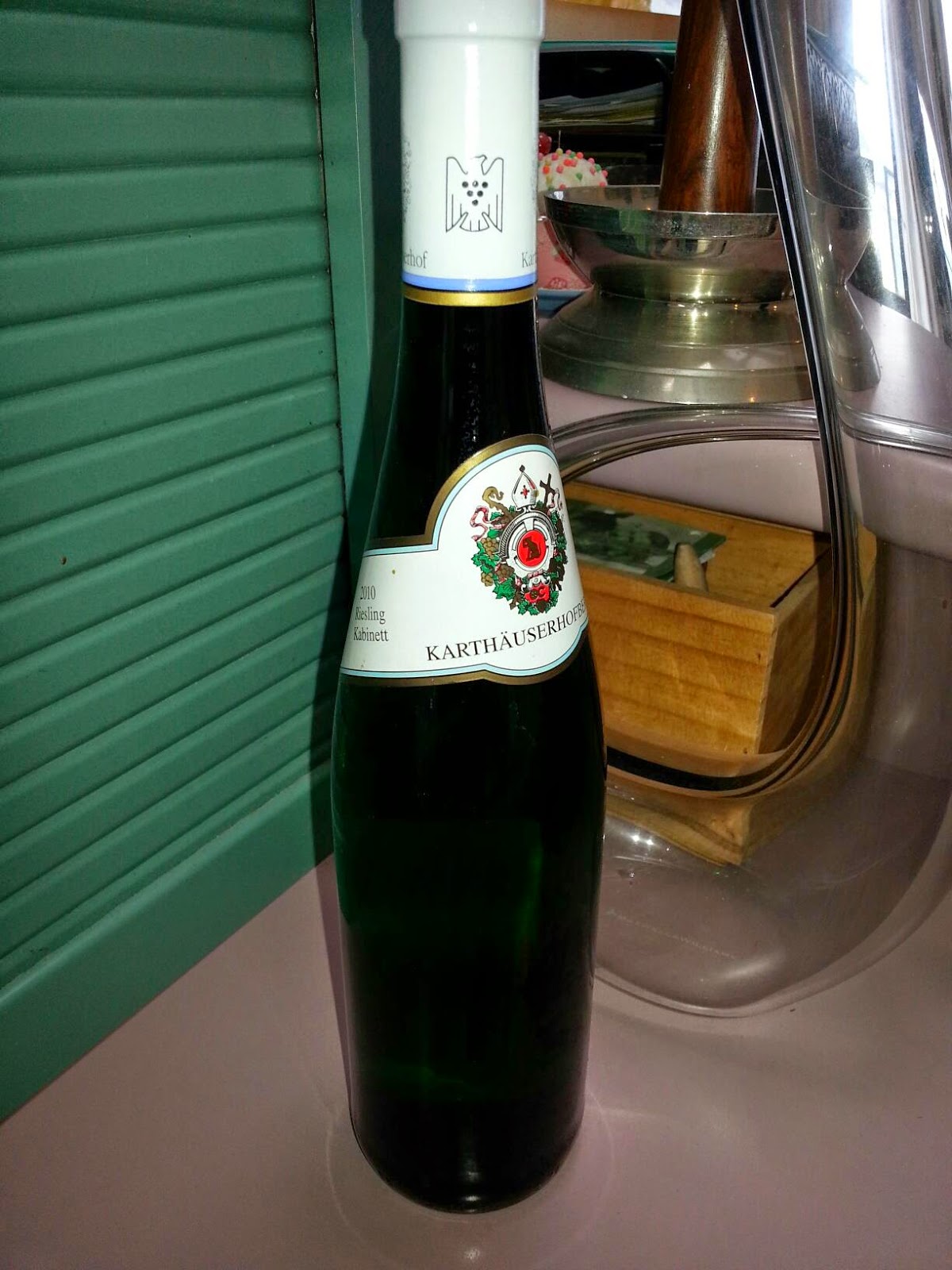 The Organic Couple have had a change of lifestyle, and are now far more relaxed.  SWMBO and I invited ourselves around to visit the new abode, and can report it will be a lovely home for them.  Of course, we didn’t turn up empty-handed, and our gift were flowers – in bottled form.  We all share a love of Riesling, and liken it to drinking spring flowers.

The wine was a 2010 Eitelsbacher Karthauserhof Riesling Kabinett.  We visited this beautiful estate in the Ruwer, near Trier, many years ago, and were hosted by the urbane and self-effacing Christoph Tyrell who showed us though a wonderful range of delicious wines in the delft-tiled tasting room, and we worked it off with a walk and climb around the estates vines.

So the memories flooded back on opening this wee beauty.  Pale and delicate, pristine and pure, with the finest florals and most subtle honied notes.  Refreshingly crisp and cutting.  A stunning balance between floral fruits, sugar and acidity – yes, fresh cut flowers.  We were glad that another bottle was tucked up at home – maybe to share with the Organic Couple again, on our next visit.