The Mosel wines of Clemens Busch have become firm favourites in our household.  They are getting more expensive as other wine lovers cotton on to how good they are.  But SWMBO retains a little in the budget to purchase a few bottles when the time arises to replenish the cellar.

What’s so special about Clemens Busch is that while his more conventional ‘fruit-sweet’ wines are excellent, and often outstanding (we just love the Marienburg Spatlese Goldkapsel), the dry Trocken wines are even better.  At the top level are the GG wines which are expressive of either Grey, Red or Blue slate on which the vines are planted in the Pundericher Marienburg vineyard.  We enjoy all three expressions for their individuality, the red slate standing out a bit more for its richness.  But the blue and grey slate retail floraity and finesse.  And they shoe the real character of the dirt in which the vines have their roots. 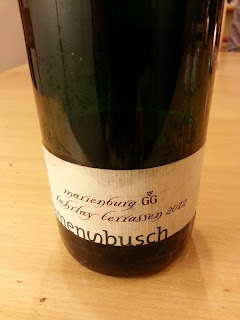 We had the occasion to open the 2012 Clemens Busch Pundericher Marienburg Riesling GG ‘Fahrlay-Terrassen with Pedro, the most laid-back host in the world.  He hadn’t had much trocken Riesling or Clemens Busch for that matter.so it was a treat to treat him.  This is from 100 y.o. vines on blue slate terraces.  The 2012s are just starting to show their full potential now.  A beautifully clean, rich earthy-rich wine that just oozes liquid terroir.  Minerals galore, with Riesling florals and Mosel raciness.  But overall, this had depth and refined textures.  Stylish and fine, but so powerful and complete.  Honied richness with the sucking of wet-stones.  Each sip inviting one to sip even more.  Fantastic!
Posted by Wine Noter at Friday, June 30, 2017 No comments:

I make no secret of it that I think Craggy Range is one of New Zealand’s best wine producers.  Starting from scratch in the late 1990s, planting vines then making wines, Steve Smith MW was the driving force behind the incredible progress the wines and brand made both domestically and overseas.  The first releases were ‘statement’ wines, about as big and bold as you could make them.  They were almost Californian in showiness.  But they were balanced and tasty, and you knew they would last.

The production of Craggy Range is geared towards the Merlot-based ‘Sophia’ first and foremost, though there are proponents for ‘Le Sol’ Syrah and maybe ‘Les Beaux Cailloux’ Chardonnay as the best wine.  The latter wine is in a hiatus, as the original vines, affected by virus, were grubbed up.  Make no mistake about it, the majority of the production of the ‘Prestige Collection’ wines is ‘Sophia’.  Remarkably it isn’t as expensive as the other reds in the ‘Collection’.

Nowadays, the style of ‘Sophia’ is much more refined.  It isn’t a little wine by any means, and it is still very serious, very structured, and built to last, while developing great layers of flavours and indeed complexities.  The 2015 has just been released, so I can’t speak to it as I haven’t tasted it.  There’s a bottle in my ‘wait box’ though.  But the 2014 and 2013 were stunningly refined and rich, but in no way showed excesses.  Just how far the style has been adjusted and refined can be seen if one tastes the earlier wines.  It just so happens that I’ve drunk the 2009 and the 2001 recently. 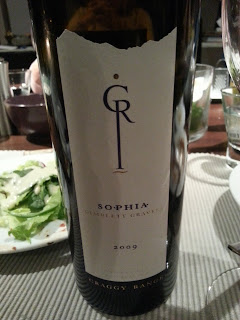 The 2009 Craggy Range ‘Sophia’ ‘Gimblett Gravels Vineyard’ Hawke’s Bay Merlot/Cabernet came from a very warm and dry growing season.  The wines have generally turned out big, black, sweetly ripe and structured.  The wines had brightness and energy, and quite masculine.  The ‘Sophia’, though with a feminine name was exactly that on release.  It was a stunningly gorgeous and decadent wine, with great potential.  On this opening, it was still black-red in colour, near impenetrable, though the purple flush of youth had faded.  On nose and palate, the fruit was rich and sweetly ripe with dark plums, hints of liquorice, maybe a touch of currant and cassis, but in no way showing coolness.  What it did show surprisingly, was style and a sense of restraint.  Not quite refinement, but a composure and a nod toward possible elegance.  The tannins were considerable, but very ripe and fine-grained, and the acidity totally integrated.  Only the merest hint of some development emerged in the glass.  It was a glorious bottle to drink, and should have been decanted.  It you didn’t take a step back to appreciate it, you could have missed how it had become so stylish. 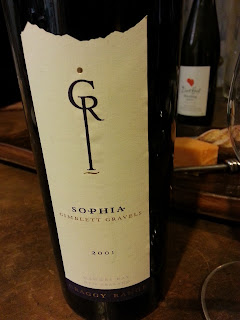 Then the 2001 Craggy Range ‘Sophia’ ‘Gimblett Gravels Vineyard’ Hawke’s Bay Merlot/Cabernet.  This was the first release.  It was a true showpiece wine.  It was as bold and gutsy, and marked by as much new oak smells and tastes as the Syrah and Cabernet-based wine.  Steve Smith and his winemaking team held nothing back to make it impenetrable and black-purple in colour, totally nostril and mouthfilling, coasting all the senses with decadence and opulence.  It is a giant among giants.  On opening 15 years down the track, it was still impenetrable in colour.  Only on the edge or when the glass got lower could you see garnet and brick to the black.  Again, massively ripe-fruited with black plums, now going down the Dutch liquorice path.  Layers of black fruits unfolding earth and undergrowth, laced with cedary oak.  The palate just simply overwhelming in flavour, yet so drinkable.  Still plenty of tannin extraction and grip, but this too was ripe and fine, beginning to resolve.  This was sipping and meditation material, not gulping and gusto wine.  It was a monster then.  It still is a monster, but a loveable one.  We were truly monstered.
Posted by Wine Noter at Friday, June 09, 2017 No comments:

Our friend Cool Pete is a cool dude.  He looks the part and plays it so well too.  You’d think that such folk with a bit of pretension might lack the sensitivities to appreciate life to the full, but we know he is far more complicated than that, thinking about the finer things in life and supporting those in need when push comes to shove.  Cool Pete was a lunch and he dug out a wine that reflected his personality perfectly. 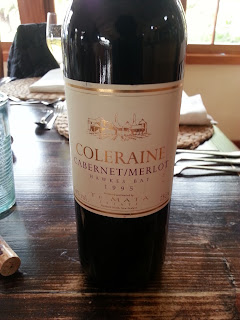 It was a 1995 Te Mata ‘Coleraine’ Hawke’s Bay Cabernet/Merlot.  Who knows how long he had had it in his cellar, but there it was, in pristine condition.  Immaculate label and unmarked in any significant way.  Pretty much as Cool Pete was this day.  On opening the colour was good garnet red, and the aromas everything you expected of an aged, but ripe enough Bordeaux blend.  Lovely soft blackcurrants and dried herbs, a touch of undergrowth and cedar, some oak too.  Then on palate, incredibly elegant and light on its feet, like Cool Pete.  The flavours showed the cooler climate, but without and herbaceous stalky or leafy notes.  Bottle-aged for sure, the secondary and tertiary flavours prominent.  Cool Pete is like that too.  He’s moving along, but never moved out!  The wine still fresh, though not quite vigorous, but lively and reasonably animated.  The tannins were still there, but essentially well on the path of resolution.  Cool Pete has mellowed too, over the years
If there could be any criticism, it came from Cool Peter: it was a bit lacking in concentration – but heck, SWMBO and I own up to that all the time!  For those vinously minded, it was a lovely growing seasoned marred by rain at the end resulting in dilution.  Hawke’s Bay got away lightly.  Other parts of the country got washed out.  We ended up drinking the bottle easily.  It was one of those easy to get-on with bottles, with plenty to talk about.  Sounds a bit like Cool Pete.
Posted by Wine Noter at Wednesday, June 07, 2017 No comments:

Your first friends are often your best and most enduring.  SWMBO and I arranged a lunch with one of our original friends, with others who figured in our wine lives at an early stage.  There’s always lots to talk about – times long gone and times to come.  The endearing part of getting together is that they all seem ageless.  It’s probably our image of these people at their peak, and that’s how we want to remember them, always. 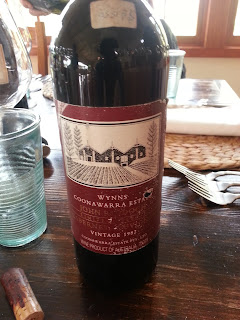 We took along for the lunch the 1982 Wynns ‘John Riddoch’ Coonawarra Cabernet Sauvignon.  This too was an original.  Although Wynns is steeped in history making the iconic ‘Black Label’ since the mid-1950s.  But it was timely they introduced the super premium ‘John Riddoch’ in 1982, made from the severest of selections.  The fruit showed much greater richness, concentration and depth, as well as lovely layers, including a whole heap more of new oak.  Many critics felt that the Coonawarra-ness was lost to winemaking artefact.  But those with faith could imagine what would happen with time.

Roll on 35 years, and we opened our bottle.  It was sensationally good.  It was very varietal with super ripe blackcurrants and cassis, without going into the blue fruit or raisiny spectrum.  And classical mintiness, the Coonawarra signature.  Lovely acid freshness, and just perfect tannin and structural balance keeping it all in line.  The oaking stood out a bit, but who doesn’t like a lick of expensive and exotic new oak?  All of the group, including some geeky winemakers enjoyed it.  The wine will continue to hold and maybe develop more detail and interest over the next 10+ years easily.  It’s always good to have the original than a copy.  You enjoy them just a whole lot more.
Posted by Wine Noter at Monday, June 05, 2017 No comments: