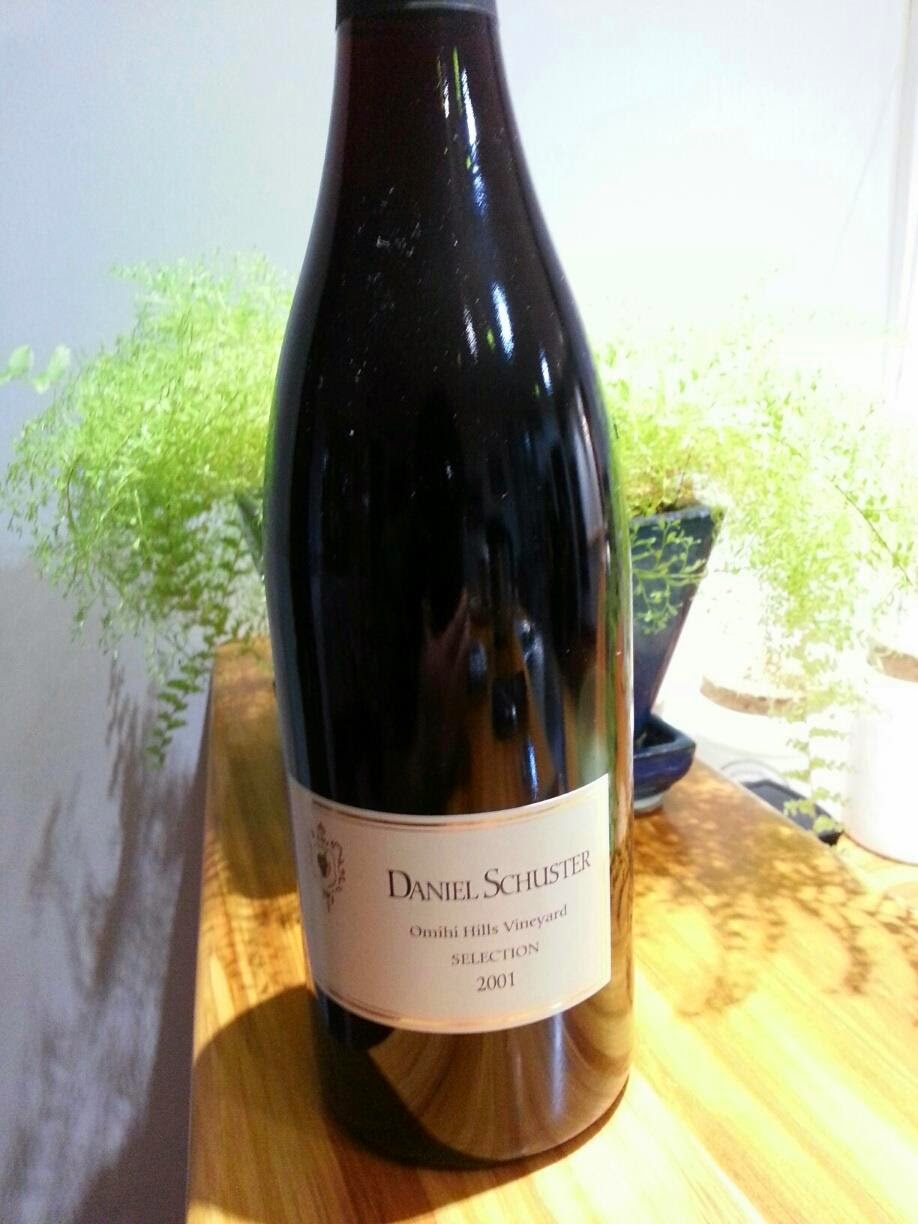 We’d spent the weekend with the WRXers, and toured the district looking at sights.  To cap off the day, a lovely meal with barbecue, everything cooked to perfection.  Our contribution was a bottle that Grannianni had passed on to SWMBO with the instructions: “Just enjoy it!”  So the top was broached and away we went.  The wine was the 2001 Daniel Schuster ‘Omihi Hills Vineyard Selection’ Pinot Noir.  Danny Schuster was the modern godfather of New Zealand Pinot Noir, making the benchmark St Helena 1982.  It was the original of the genre, and brought him fame rather than notoriety.  Danny went on to establish his own label, and the wines ranged from more ordinary to spectacular.  This 2001 was seen as in the latter category.

I’ve had the chance to see this wine many times.  In its youth, it was black and concentrated, but not overly so to the extent it lost its Pinot Noir-ness.  It has remained that way ever since, clearly a wine with all the potential to live well, while developing greater complexity on the way.  This time, it was definitely in the secondary spectrum, with red and brown fruits, a softened palate with very smooth flow.  Savoury game and earthy notes prevailed.  Yet it still had stylishness and clear brooding depth to go another 5-7 years easily.  How did Danny get this one so perfect?  So much built into it, yet not too much.  As layers peel off, there's another layer there.  The vinous Russian Doll.  It was an original and still is.
Posted by Wine Noter at Friday, March 28, 2014 No comments: 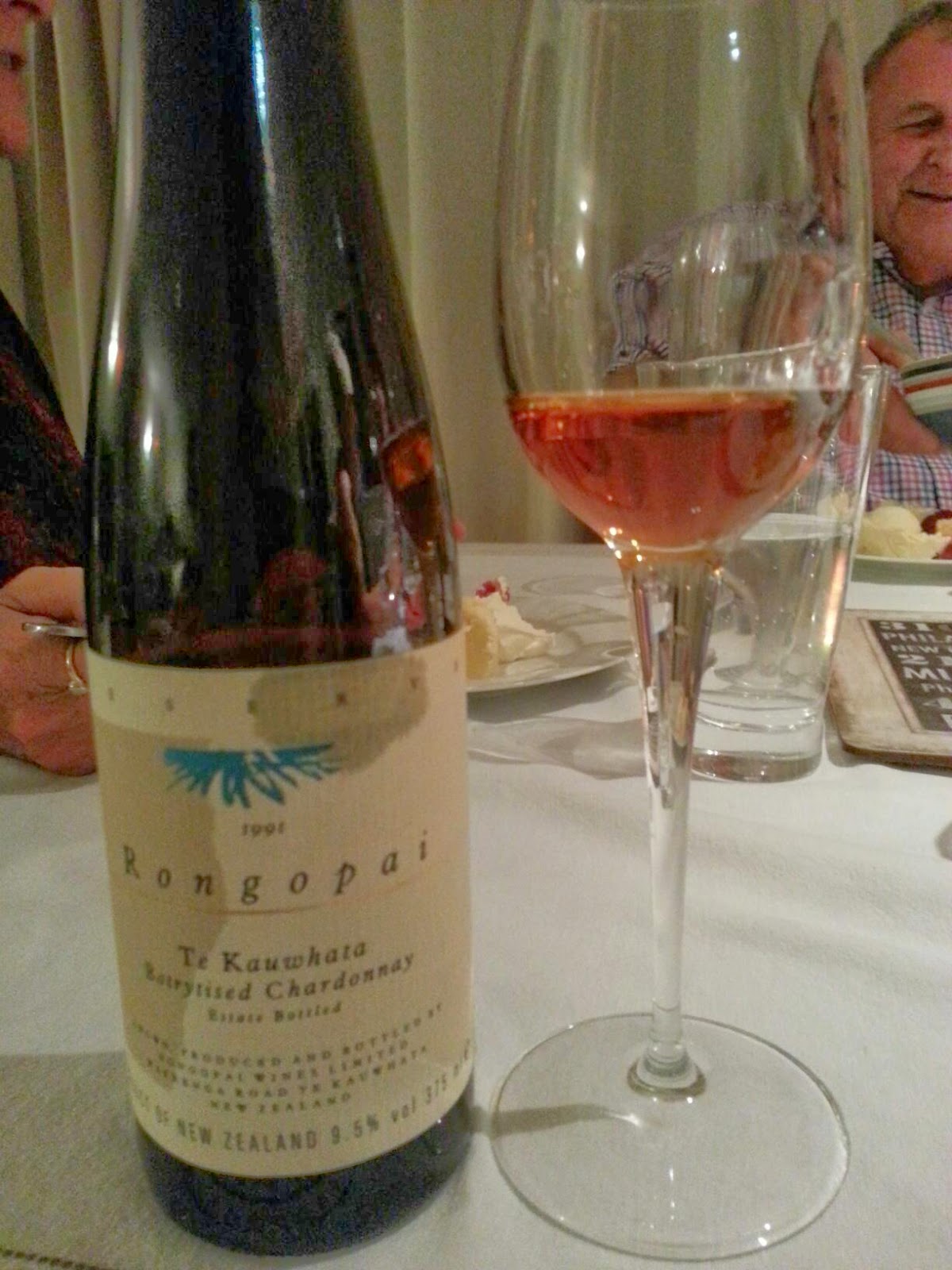 The Eventress and New Man called out of the blue for dinner.  Sometimes the spontaneous invitations are the most workable, as it is there and then.  I was free, and SWMBO made herself free.  Over the course of the meal, a number of fine bottles came and went.

Then dessert called for something sweet and sticky, and the New Man raced downstairs to the cellar for something not planned.  He found a 1991 Rongopai Te Kauwhata Botrytised Chardonnay, in fact his last bottle.  It was sticking around, as he wasn’t game to try it on other guests.  We were clearly a special case, possibly because we are less discriminating – or is it because we try to appreciate all the wines?

This was a clever and innovative wine over 20 years ago.  There were the classical botrytis affected wines from Riesling, Semillon and Furmint.  Who would want to waste Chardonnay, unless it was a mistake to let it go rotten?  Rainer and Tom at Rongopai were out there, and sweet wines were their forte – and this was a noble experiment.  Sure enough it was a success, and they charged highly for the privilege of obtaining bottles.
This last bottle was golden mahogany in colour, and quite burnished in character.  Loads of toffee and caramel, with traces of wild honey and marmalade.  Only a suggestion of drying out still.  And plenty of acid for liveliness and to balance the decadence and sugar.  We savoured this bottle, for its ability to stick around.  Its makers had moved on…
Posted by Wine Noter at Tuesday, March 25, 2014 No comments: 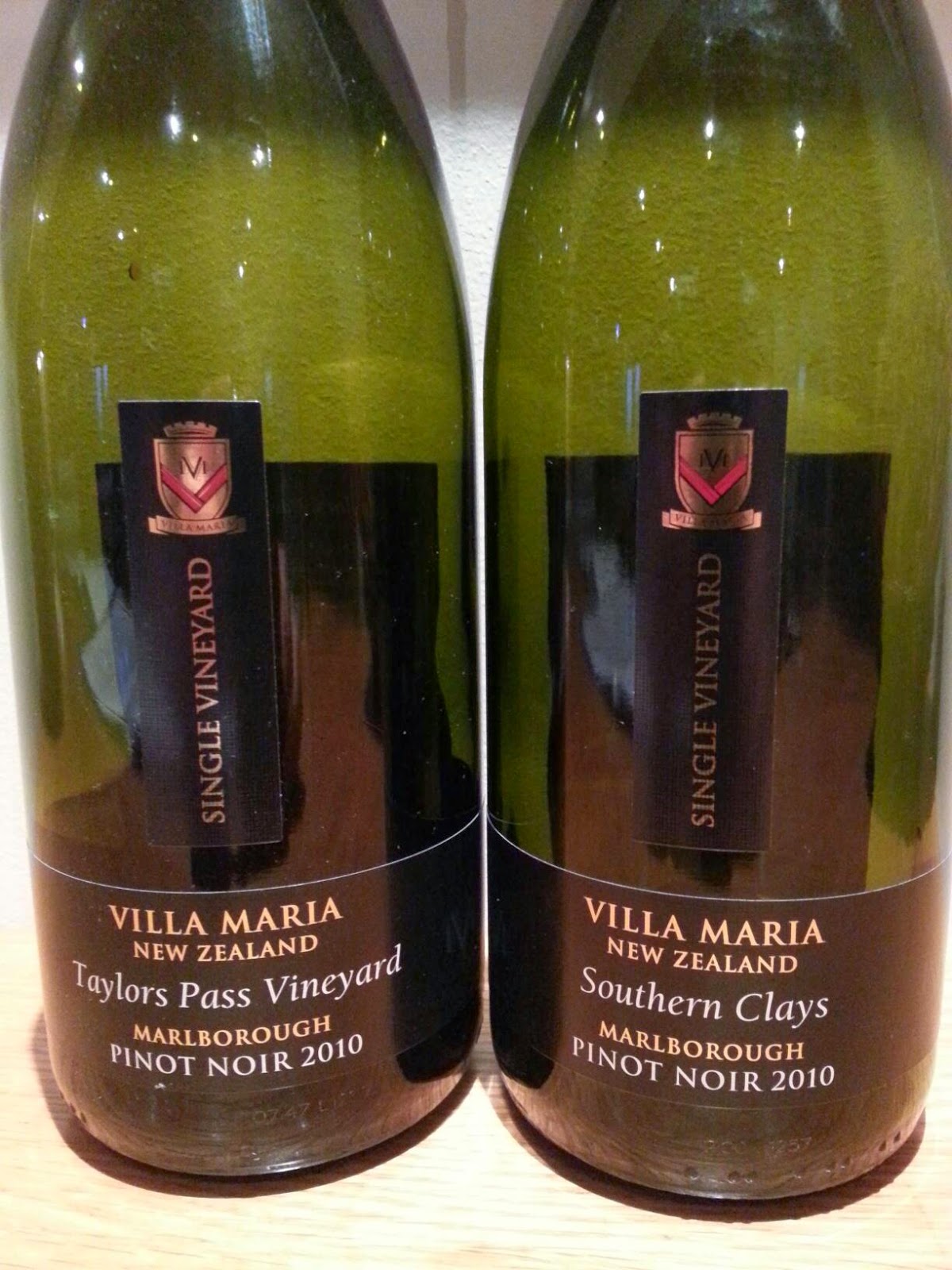 We were at the place of birth, and we had to have a wine from the source.  Stew Pot and Mitty were taking great delight in sipping on the 2010 Villa Maria ‘Single Vineyard – Southern Clays’ Marlborough Pinot Noir.  It’s certainly one of my favourites from the stable, as it has darker fruit flavours, berries and plums, and a full, fleshy nature.  The wine reflects its origins, the Southern Hills with the clay-influenced soils, a little heavier for sure, and it’s in the wine.  It’s certainly no fruit bomb, as there is a modicum of restraint, and there’s good structure too.  It seems to want to deliver too much, but it never does.  You ending up partaking another glass, always.  Could we do better?  It would seem not.


Until we discovered a twin to the wine that we were meant to partake of, compare and enjoy with the first.  Out host had left if for us.  A 2010 Villa Maria ‘Single Vineyard – Taylors Pass’ Marlborough Pinot Noir.   From higher in elevation, and lighter soils, to the south, on the cusp of the Awatere Valley, on the northern bank of the river.  And it comes through in the wine.  The wine is lighter, finer, tighter.  More red fruits, cherries for sure, with more pronounced cut, acid and tannins.  Less flesh.  Some might say it is more classical Olde Worlde style.  Well, Stew Pot and Mitty took a liking to this one.  Whereas SWMBO and I liked the former.

There’s so much to like about both, because there’s a lot of similarities, after all they come from the same family.  They’re actually twins, and not identical, of course
Posted by Wine Noter at Friday, March 14, 2014 No comments: