I adore elegance and sophistication in a wine.  Many wines are light, but others are big.  Being big doesn’t mean that they are necessarily great.  Size does make a statement, but that can be a bit boorish.  However, sometimes a statement is truly that.  You stop in your tracks, soak in as much of the awe as possible, and enjoy the dimensions for what they are.  You realise that some wines are seldom matched, and that’s because of sheer size.  You may not be able to take in too much, otherwise you’ll be overwhelmed.  But at the end of the day you know you’ve experienced something really special. 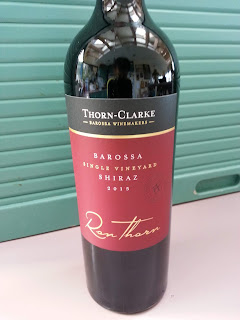 Such is the 2015 Thorn-Clarke ‘Ron Thorn’ Barossa Shiraz.  A tribute to Cheryl Thorn’s father.  This is a no-holds-barred all-out statement.  Impenetrable black-red colour, with a touch of garnet.  Then a voluminous bouquet packed full of ripe plums with spices, liquorice black-earth and a huge whack of spicy, cedary, pencilly oak.  Its’ an out-there wine, but strangely it works well.  It’s fulsome and pushy, but it still draws you in.  On palate just packed with dense flavours of plums, blackberries, liquorice, and that layering of exotic oak.  The mouth is weighed down with extract and richness, but there’s grip too.  The wine doesn’t leave your mouth.  It just stays and stays.  Then there’s the length.  You can’t drink a glass of this quickly.  You sip it and see how it fills all the places in your mouth other wines haven’t been to before.  It’s a magnificent monster.  Totally lovable, but you can only take so much.

We can’t drink first growth claret or grand cru burgundy all the time, and even if would had the means, a diet of the very best will soon lead you having a palate that can only appreciate a tiy segment of the market.  We need to taste more ordinary wines to let us know how good the top wines really are.  However things do get a little blurred when the ordinary wines perform way above their country status.  It’s the reality of the modern world of wine nowadays where quality, even at levels of modest aspiration can indeed be very, very good.

Such is the case with a trio of wines from Calmel & Joseph, two winemakers who operate as Languedoc-Roussillon negociants.  However, they are not your typical negociant, because they take an active and personal interest in the wines they produce from the very start – at the vine and vineyard level.  They have a great deal to say on how the vines are treated throughout the growing season, and decide on picking.  But also at vinification level, and then at the elevage level.  The results are that their ordinary wines have become nearly extraordinary. 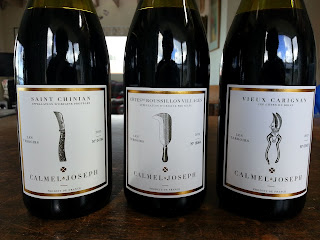 SWMBO and I has the chance to try three of the latest arrivals into the country.  The 2015 Calmel & Joseph ‘Les Terroirs’ Saint Chinian, a Syrah-based blend was deliciously plump and fleshy.  Super-ripe fruit, you could almost say a little porty, but packed with plush flavours and soft structure.  For those who live in a cooler-climate country, this has warmth and generosity.  Then a 2015 Calmel & Joseph ‘Les Terroirs’ Cotes du Roussillon Villages.  This has ripeness, defined fruit clarity, with poise, perfumes and finesse.  They stylishness of this wine made it a winner.  Then a more interesting Calmel & Joseph ‘Les Terroirs’ Cote du Brian Vieux Carignan.  Made from vines over 120 years old, the concentration, depth of flavour and rich texture gave credence to the benefits of vine age.  The flavours initially unusual, with dark red fruit and a streak of herbs.  With aeration, these became melded together and more harmonious.  I rated them all pretty well with one wine at 5-stars.  What’s so remarkable is that they retail at around $18.00 per bottle.  These were indeed fantastic quality country fare.

It is interesting how people and wines develop similarly in the ways they express themselves.  In youth, people make noise to be heard and noticed.  Eventually, as they find their place, they are happy to speak at a civil level to interact well.  As one matures, a person can be beautifully poetic and even musical in how they come across.  One well known Rhone wine-man said that whe he started, he made noise, but now he makes music.  And sure enough, what were ‘statement’ wines are now subtle and complex, and even better.

Many, many winemakers throughout the world go through this path.  At dinner with The Prince, he pulled out two wines from his cellar, served them blind, and just asked us to say what we thought they were and what we thought of them.  No easy task, really! 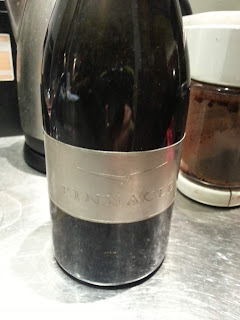 I will name the wines as I describe my thought processes. The 2005 Peregrine ‘Pinnacle’ Central Otago Pinot Noir was black as black and nearly impenetrable.  There was no purple as such, so it had some age.  Taut and tightly bound, but with great intensity of black cherry fruit, with considerable earthiness.  This had density, substance and presence of fruit.  Black herbs, black earth and minerals.  Yet the tannins showed some resolution, without giving up structure and body.  Just no real grip and furriness of texture.  Then the savouries emerged.  They were black and concentrated, and all enlivened by crisp acidity.  I said Pinot Noir, the wine from New Zealand, the black fruit and freshness saying North Island.  But what?  It was a monster in the past.
On revealing, the identity, it all made sense.  This was Peregrine’s first edition of their super-cuvee to retail over $100.00.  It was a low yield year too.  The berries were small and the skins relatively thick.  My experience of such wines is that with age, they show a cooler herbal and stalky note, especially if not fully ripened.  This had none of that.  It was bold and glorious wine on release and promised with its potential.  It was a loud wine.  It was still loud, but now in an unsophisticated way. 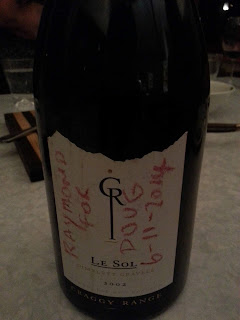 Then came the 2002 Craggy Range ‘Le Sol’ Gimblett Gravels Hawke’s Bay Syrah.  (Apparently this was a bottle given by me to The Prince, which had to be opened in my presence.  It was in remembrance of the late Doug Wisor, young winemaker at Craggy Range, tragically killed.)  Another wine that was black as black, but this time with a touch of garnet/brick age on the rim.  Tight and quite compressed on bouquet, with ripe black fruits, hints of spice, black-earth, game and savouriness on the nose.  Certainly secondary, and dare I think Old World – France?  No, I was wrong.  I had Rhone Valley on my mind, but couldn’t decide between Syrah (north) or Grenache (south).  This was clearly a ‘super-cuvee’ of sorts, and such things as variety can get blurred.  A range of flavours emerge, but all the while, that tight heart was there, the residual of what was great concentration.  And amazingly resolved tannins, without giving up shape or structure.  A softer acidity, too.

On finding out what this was, my Rhone area of thinking was endorsed.  The similarity with the previous wine was striking.  Both were made as ‘statement’ wines with ripe, but not over-ripe black fruit, plenty of extraction, quite fine-grained of course, and a decent whack of oak.  This 2002 eas the second ‘Le Sol’ made.  Both were still very fine in quality and strong and concentrated.  The black fruits quite monolithic.  There was no beauty as in wines made now, to music.

The Spanish next-best-thing to classed growth claret is top-end Ribera del Duero.  Vega Sicilia is Spain’s most venerable fine wine and its class and high pricing makes it renowned around the world.  Its relative scarcity explains the price.  It is really unattainable for most wine drinkers.  But don’t despair, there’s always another way to experience Vega Sicilia, and that’s through ‘Alion’ the property of Vega Sicilia planted exclusively to Tinto Fino, a.k.a. Tempranillo.  It’s not a take on the traditional, fully-structured, needing-time blend which has Bordeaux varieties at the core.  But instead it’s a modern expression, showcasing the finesse, detail and complexity of Ribera del Duero, with the family Vega Sicilia traits.  Don’t get me wrong, it too can be hugely structured, needing time, but in comparison with the senior sibling, it’s an approachable wine. 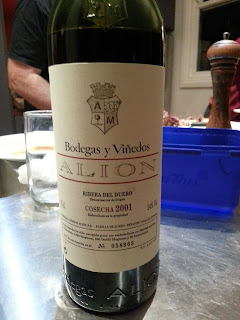 Our friends Netty and Mo brought a bottle of 2001 Bodegas Vega Sicilia ‘Alion’ Ribera del Duero from overseas as a gift.  As you can tell, they are dear friends.  SWMBO and I didn’t have the opportunity of sharing it with them, but we had it at a special dinner with the Prince, the A-Prentice and the Fun Bun Girls.  It was a special night, so having the wine was perfect.  At just under two decades of bottle age, it was time.  Still dark-red, it was indeed truly refined.  Some vestiges of red fruits and sweetness remained.  There was a claret-like proportion to it, but also a burgundian sweetness.  And also no real intrusion from savoury secondary and tertiary development.  In the glass, plenty of intricate detail, but integrated into a lovely harmonious presentation.  Certainly not a showy wine, but one that quietly slipped down, whetting the palate and enhancing the roasted lamb.  Looking back, it was delicious with its finesse, and we think everyone thought so too.  But there was no need to shout about it.