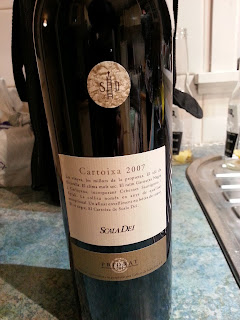 Wine has an amazing unifying nature.  The sociological aspects ae fascinating as different peoples come to appreciate the history and growing conditions of a wine.  The English speaking peoples – England and America love Spanish wine, nowadays.  The more broad-minded French and Italians would accept that Spanish wines can be exceptionally good.  And what about the Asians and Spanish wine?  On a very basic level, if one can like the taste of a wine from o foreign country and can associate it with something familiar within one’s own (and different) culture, then the connection has been made.

Our good friend, Label-Kay gifted SWMBO and I a bottle of 2007 Scala Dei ‘Cartoixa’ Priorat.  I didn’t really believe her when she said “I don’t really know what it’s like”, as she is a lady of impeccable taste, and knows wine like the back of her hand.  Priorat is one of those ancient Spanish regions with a history of superior wine, lost, but regained.  Dry and dry-grown bush vines, some quite venerable.  Tiny yields and intensity and quality.  The best wines incredibly black and concentrated, but modern winemaking has tried to make them more accessible.  This wine was Garnacha, Carignan, Cabernet Sauvignon and Syrah, so a bit of old and a bit of new.  Scala Dei, a respected producer making its way in the new world order.

SWMBO and I opened it with our Asian family.  “Chen Pi Mei” was the phrase.  Chinese preserved plums was the flavour that we all recognised.  Europeans would say ‘Dutch Liquoice’.  We all loved the wine and it brought back childhood memories of eating these Chinese sweets.  And thoughts turned to the wine.  How could this Spanish wine be so Chinese?  The wine was black as black and pretty sturdy with depth and concentration.  But the tannins were ripe and smooth, if not substantial.  Masses of liquorice and plum flavours evened it all out.  And the 15.0% alcohol?  Barely noticeable.
Posted by Wine Noter at Monday, June 27, 2016 No comments: 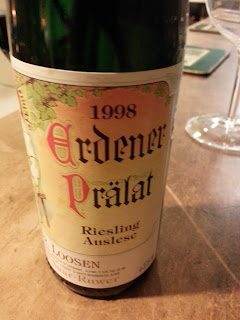 Like this rather innuendo-laden saying of the title, there’s more to a wine experience than just the technical quality and stylistic beauty – or lack of – when tasting and drinking a wine.  The Hatch Man provided a bottle of 1998 Dr. Loosen Erdener Pralat Riesling Auslese in 375 ml as a little treat.  Little bottles of delicious sweet wine have been on our minds recently, and he knew it.  So this was sent through the post as a little gift, and another sign of our long standing friendship and respect that both SWMBO and I have for him and his Love Dove.  The wine has always been a significant one.  It’s Ernie Loosen’s flagship vineyard, and the old-fashioned label honours the traditions of the region, the winemaking and the style.  SWMBO and I have appreciated it, so ant Loosen Erdener Pralat is something to note and adore.

Out came the wine as we had SWMBO’s family visiting.  To share some love is only the natural thing to do with them.  Technically the wine was a little past its best.  A little savoury, bruised apple and nuttiness showed some oxidation.  Stylistically, the slight savouriness meant a hint of sourness.  The balance was now getting out of kilter.  But these things didn’t matter.  We could still see and enjoy the richness of the fruit.  “Nectarines soaked in Cointreau” was one description.  Here was honey, with a touch our wildness.  Surprisingly elegant rather than hedonistic.  We could feel The Hatch Man and Love Dove’s warmth and generosity emanating from it.  We basked in it.  And we let it flow the SWMBO’s family.  It was a wonderful feeling.
Posted by Wine Noter at Friday, June 17, 2016 No comments: 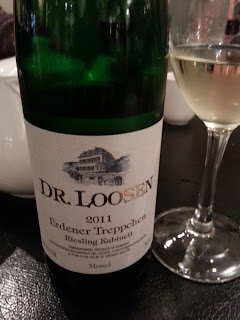 Sometimes you know when a wine has that feel of perfection that you must buy more and put it away to see how well that perfection carries.  By perfection, I’m meaning a personal and soul-deep satisfaction, rather than technical perfection which can be rated in numbers or stars.  The 2011 Dr Loosen Erdener Treppchen Riesling Kabinett was one such wine.  SWMBO and I have always loved Ernie Loosen’s style of elegant forthrightness, and especially his interpretation and capture of what this Mosel site has.  We’ve stood at the bottom of the bottom of the vineyard, and wondered if we should climb the steps to this vinous heaven.  We know the neighbouring Pralat vineyard is more highly regarded, but for us, Treppchen does it all.

Our last bottle of this wine, and it delivered everything we’d ever expected of it.  Grunter and Lou was dining with us and they were smitten too.  Lovely medium dry to medium in sweetness with he elegance of low alcohol.  Seamless in flow, with a suggestion of unctuousness, but with the edge of electric Mosel acidity.  Then the subtle exoticism of the site.  Florals and hints of citrus and tropical fruits, with honey and an edge of minerals.  Even a little toasty development, but no hurry at all required.  Mouthwateringly delicious, yet stylish and understated.  Another sip, and another glass pass without any interruption.  Perfect drinking, just perfect.
Posted by Wine Noter at Saturday, June 11, 2016 No comments:

My Kind of Sweetie 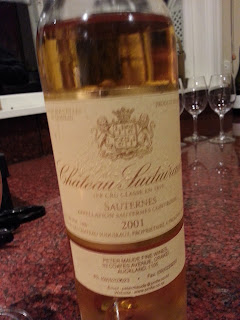 I make no secret of the fact that I like a sweet wine.  My training has meant that I can be critical of imbalances and flavours that show less than ideal fruit or winemaking.  Sugar doesn’t cover a multitude of sins.  While I see and taste a lot of local dessert wines, my heart is still with the classics.  Good German wine, Auslese and above, the Auslese wines working especially well, due to voluntarily lifted standards of sweetness thresholds.  The other is Sauternes, actually more freely available, but less seen, except among the hard core.  I suppose it’s the higher alcohol, greater structure and oak that makes it seem a little less natural, well at least more inputted that the German wines.  The other classic, the botrytised Tokays of Hungry are a bit way out for most to be seen as a normal classic…

So when the Pretty Pair pulled out a 2001 Ch. Suduiraut Sauternes to finish the meal, my eyes lit up, and my heart began racing.  I love Suduiraut.  It’s the closest to d’Yquem, though never as rich or as much dimension.  However, its sleek style is truly stylish.  There was a period when it was a bit too slender and slight, but that’s history for sure now.  And the vintage. 2001, one of the greatest in recent times.  Beautifully golden yellow with a little depth, but great sheen.  The nose impressively concentrated with ripe yellow fruits, marmalade, waxy Semillon and nutty oak.  Even the volatile lift as is normal.  On palate rich and decadent, but also not.  There’s always a style of restraint that keeps it in check.  The flavours as suggested by the palate.  Unctuous textures, and lovely fresh underlying acidity.  This has a long way to go before full maturity.  There’s a touch of caramel and toffee, but mahogany colours and the taste of barley-sugar and savoury marmalade is a long way off.  Give it another 15 years, and its true glory will be seen.  Lesser vintages such as the 2004s, another favourite of mine, won’t have the complexity and drink earlier, with pleasure.  But with this 2001, you know it’s special.
Posted by Wine Noter at Wednesday, June 08, 2016 No comments: 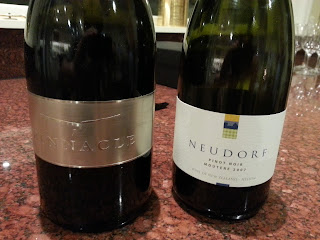 The Pinot Noir vintages of 2005 and 2007 in New Zealand saw some interesting results with the fruit.  Both years saw smaller berries and tougher skins.  At the time, the wines made from these years were seen as remarkable in their structure, and depending on the district, made up for what could have been less than ideal ripening, as the smaller bunches and berries quickly gained to where they should have been.  Over time, the good wines have proven to be good without showing any nasties, but in some wines, there are green characters and excessive tannin and extraction.  That’s what generally happens with bottle-age being the great leveller.  The Pretty Pair and The Fine Fin People each put up a Pinot Noir from one of these two idiosyncratic vintages, and they made a fascinating comparison.

First was the 2005 Peregine ‘Pinnacle’ Central Otago Pinot Noir.  Released as arguably the most expensive New Zealand Pinot Noir at the time, bottled in heavy glass, a pewter-like label, and a machine metal tube to encase it.  Garish to some people, but just the ticket to show-off for others.  The wine was clearly made to be a statement.  Well a decade or so on, it was still a statement.  Dark coloured and dark fruited, and truly sweet in flavour, though unveiling the slightly disconcerting flavours of herbs and stalks, along with ‘cola’ to some of us.  Sure these were signs of something cool creeping in.  But the lusciousness, size, mouthfeel and boldness, including the oaking was sensational.  In a time when the caricature of Central Otago Pinot Noir was everything, this was one of the best, and still seems so today.  An intellectual statement!

Then came the 2007 Neudorf Moutere Nelson Pinot Noir.  It could never be as big or as brazen as the Peregrine.  Much more sedate and stylish, this nevertheless had power and concentration.  Afterall, it too was a thick skinned berry year.  But the flavours in the favour red fruit spectrum, with complexing dried herbs.  Whole cluster complexities maybe?  Complexities anyway.  Still with fine grip, and not in any excess.  If anything a little acidic, and this carried the wine.  The overall impression was not of maker or region, by variety in its best and most interesting expression.  This was one to sip and savour on, as one’s secret dinking pleasure.  Delicious in a visceral way.
Posted by Wine Noter at Tuesday, June 07, 2016 No comments: