Ah, I occasionally reminisce about the cool days of youth, and the cool wines that we drank.  Three decades ago varietal wines were the new thing, and Gisborne was the largest grape-growing region in New Zealand.  And Montana Wine ruled!  The sophisticated wine for the masses was Gisborne Chardonnay, as it was dry.  The alcohols were low compared to nowadays, and there was little use of oak, well, new oak, anyway.  There was no playing around with wild yeasts, batonnage or MLF.  It was pretty straight up-and-down stuff.  I’ve been surprised by some f the Chardonnays wines from that era.  McWilliams in particular.


From the long-lost cellar, I had saved some mementos of this time, and a meeting at the Never Relentings was the ideal time to release them.  Both SWMBO and I were not expecting too much.  The mini-vertical started with a 1980 Montana Gisborne Chardonnay.  Golden colour with hints of browning were worrying.  Devoid of fruit really, more fusel-alcohol and grappa-like vestiges, this ‘smelt’ bitter.  Acidic, thin, rather mean, with nutty oxidation and bitterness.  This had faded to nothing except the greener componentry.  Next was the 1981 Montana Gisborne Chardonnay, light golden and just a hint of browning.  Very light aromas, a little citrus still, seeming with fruit sweetness, and hints of herbs.  The palate reflected the nose with rather green and sour citrus fruit flavours.  Rather sharp in the mouth, but not oxidised at least.  Remarkable how it had held, but no pleasure here though.  Then the 1982 Montana Gisborne Chardonnay.  A step up, as just light golden coloured, with interesting citrus, toasty and savoury herb and stonefruit aromas.  Flavour for sure.  The word ‘positive’ might be a bit strong.  Not offensive, but not really pleasurable.


These showed that commercial, ordinary wines of yesteryear just didn’t have what it takes to go any distance.  To be fair, they weren’t designed to.  To even get this far is a minor miracle.  Maybe their cooler-spectrum picking helped preserve them a little.  It does us good to remember they were cool in their day, in more than one way. 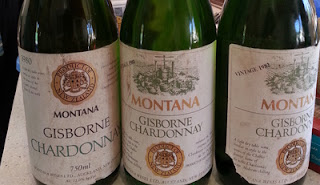 My original mentor was in town.  I call him Father and he is very much that too me.  But Father and Mother are much more than that, as they are friends and fun.  SWMBO also came under the tutelage of Father, but they were more Brother and Sister.  It’s all quite confusing, but there are many years between us all and life is entwined.  Father and Mother were residing with the PA Chef, who we all have known for years.  It was an impromptu get-together and talk centred on the past and many good and sweet memories that stretched back a number of decades.


A number of bottles were broached, but the P A Chef brought out a delight to add to the flood of memories.  A 1994 Ch. Lafaurie-Peyraguey Sauternes.  Now 1994 wasn’t a stellar year for sweet Bordeaux, in fact it was dismal, and I remember the wines were light and had rotty things that were not necessarily noble.  But Lafaurie Peyraguey made a cracker.  The property came under the marketing domain of Cordier and I’d suspect there was more input that just sales.  Light mahogany in colour, this exuded toffee, caramel and barley sugar, as these old and mature numbers do.  A bit of VA, but this faded.  More elegant in style, and not weak, thin or watery at all.  Decent flavour and lively interest, and the acidity giving it bright life.  The only negative signal was it got drier on the finish, and a little grip appeared,  Really delightful and I still have a sweet memory of the night, the past, and this wine.
Posted by Wine Noter at Thursday, February 14, 2013 No comments:

It was a turning point for The Young One.  It’s an important day when you change from being a younger one to a mature one.  Of course it deserves a celebration, so we chose a fine fish place and headed down for a feed.


With fish we had the bases covered with two young wines.  A 2011 Auburn Alexandra Central Otago Riesling was served on the cool side, which accentuated the flinty, minerally reductive characters, and lessened the fruit.  SWMBO and I thought we’d made a mistake choosing it, but a magical transformation occurred as it warmed up.  The flintiness dissipated, and wonderful florals and citrus fruits emerges, and the suggestion of sweetness and richness became definite.  We became much happier.


The other young ‘un was a 2011 Neudorf Nelson Chardonnay, instantly gratifying, with plenty of rich citrus and stonefruit flavours and a good whack of oak and complexing notes from lees and things.  Just seamlessly rich and a wine with power, making a statement with a degree of class.  Both of these were more-ish, and we figured they’d improve and turn older in time with grace for the Riesling and a bit of decadence for the Chardonnay.


We’d kept a couple of oldies for this occasion, and it was a pleasure to see how they’d fared with their changing from young puppies to older and wizened dogs.  A 1990 Ch. Olivier Pessac-Leognan.  Not the grandest property, but offset by a great vintage.  Still dark, and vigorous with dark red and black fruits.  The secondary aromas and flavours quite integrated with the terroir of bricky-Graves character.  Still with fine and firm tannins, this was the wine to go with the selection of hard cheeses.  We’d expected this to have turned old, but no, this was still to enter its maturity plateau.


Then the piece de resistance, a 1992 Quinta do Vesuvio Vintage Port.  The Symingtons had just released wine from this special site with a stupendous 1990.  This 1992 was a lighter wine.  Opening it, it was still very dark indeed.  Lovely ripe berry fruits, true port, with red and black fruits.  Very supple and a deliciously soft, fine, fresh mouthful.  Some spirit bolstering it up a little. Quite classy for a middle weight.  It wasn’t great, but really, really nice and easy.  This too was young like the Young One.  It’ll go on and turn old with ease and without effort, no doubt just like the man.
Posted by Wine Noter at Friday, February 08, 2013 No comments: