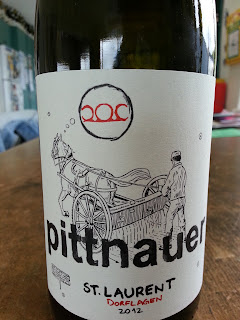 We all want to open wines that please us and those we share them with.  It does our soul good and it spreads the love around.  Of course when we are the recipient, we just want to do the same.  That’s how the world of wine works!

We particularly enjoyed a 2009 Pittnauer St Laurent ‘Alte Reben’ about a month ago.  Being an old vine expression, it was pretty serious, but balanced accessibility with structure and sophistication.  It was clean but still funky.  You can expect such things from this specialist biodynamic St Laurent producer who operates on the eastern shores of the Neusiedlersee in Austria.  And it went down well with our guests.

So this time, at home, just SWMBO and I, we followed up with the more approachable 2012 Pittnauer ‘Dorflagen’ St Laurent, a village wine, given less than a year in barrel.  As could be expected, this was a fruit-focussed wine, with sweet and succulent savoury dark red berry fruits, with the game, herb and savoury spice that the variety gives.  Modest extraction, suppleness and juicy freshness ruled the day.  We know it would have pleased the crowd if they had been on hand.
Posted by Wine Noter at Tuesday, February 23, 2016 No comments: 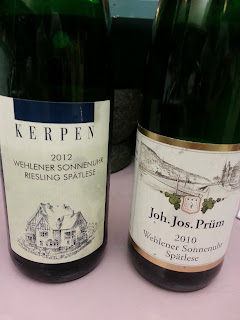 It is always instructive to serve wines together.  If you can get all the factors bar one to be identical, then conclusions become even more complete.  It was a get together and dinner, and SWMBO and I pulled one wine out of the cellar.  It was something we liked very much from tastings and have had a few bottles already.  Jol-Vino brought along something that she loved and believed we’d like too.  It was a case of ‘snap’.  The two wines were separated by producer and vintage, but came from the same vineyard and to a similar level of richness.  The producer and vintage alone were enough to make the wines significantly different however to make the true classic comparison.

First up was the 2012 Kerpen Wehlener Sonnenuhr Riesling Spatlese.  Sealed with ‘Vino-Lok’.  A gorgeous wine in its own right with some yellow colour and golden hints.  Quite broad and voluminous, and soft on bouquet.  Rich and medium-sweet plus on palate. With lime fruit, florals and plenty of honey.  Broad, rounded and mouthfilling, the sugar a little more prominent.  Softer acidity, and just a little savoury complexity, more so from bottle-age than reduction, so nuances of toast.

Then onto the 2010 J. J. Prum Wehlener Sonnuhr Riesling Spatlese.  Pale in colour, and with some noticeable flinty, minerally reduction.  But underneath and blossoming came the pristine clarity of limes and florals laced with steely minerals.  You could smell the fresh acidity.  On palate a reflection of the bouquet.  Absolute precision with fine acid cut to balance the considerable richness and sweetness.  The knife-edge poise meant it drew you in for continued sipping.  Again a little flinty reduction, but this demonstrated terroir.  The former wine demonstrated house style.  The latter wine also showed the vintage with its razor acids.  This was the winner on the night.
Posted by Wine Noter at Sunday, February 21, 2016 No comments: 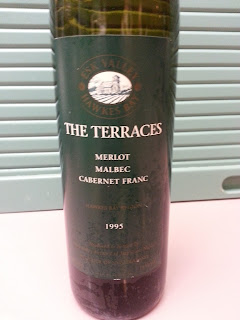 The way wines develop and evolve never ceases to amaze me.  Some retain the freshness and brashness of youth for a long time, then they take a rather rapid turn towards maturity.  Many white wines appear to behave this way.  Other winess, more so in red to me gain their secondary and tertiary characters, and stay on that level for what may be an interminably long time (if you excuse the pun).  There’s no set rule that I can ascertain, but I’m sure someone has a theory if not explanation.

A remarkable surprise was the 1995 Esk Valley ‘The Terraces’ Hawke’s Bay.  Now 20 years plus and made from approximately equal portions of Merlot, Malbec and Cabernet Franc from a special hillside site behind the winery in the Bay View district.  The varieties aren’t known for their longevity in comparison with Cabernet Sauvignon, and in fact, one notable Hawke’s Bay man calls Malbec a ‘weed’ which gives coarse wine.  However 1995 was a particularly auspicious vintage, and SWMBO had bought some from the maker, as all the portents were right.

The occasion to open it and drink it was also right with the I-Spy Man and Jol-Vino in attendance.  Looking black as black, and with only a little garnet, and no bricking, this looked youngish, but not old.  The nose was also fresh and packed with bold, ripe black berried fruit aromas with a touch of refreshing curranty detail.  Not unripe, not even cool, but definitely with some of the Cabernet family involved.  Then plush, sweet and juicy on palate.  Mouthfilling and overt, with density and depth, and soft, fine, supple tannins, and fine, gentle acidity.  Playing the Wine Options game, it spoke of New Zealand rather than Australia and France, and easily recognisable as Bordeaux-varietal based rather than Burgundy or Rhone styled.  One would have to go Hawke’s Bay, but vintage confounded everyone.  Not 2010, but possibly 2005?  When revealed it was 1995, there were a few gasps of incredulity.  It was ‘Oh So Young’.

With time, the aged characters emerged.  Only a little, mind you.  And those more critical saw some funkiness.  But nothing could detract from the remarkable youth.
Posted by Wine Noter at Saturday, February 20, 2016 No comments: 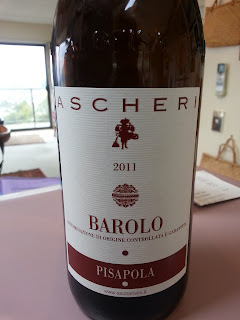 One of our favourite wine games is ‘Wine Options’, a multi-choice quiz on a bottle served blind.  We enjoy it whether we get the answers right or wrong, as we learn from the process.  It’s too easy to overthink when playing, and the best approach is to focus on the taste of the wine and not get too far ahead of yourself.  Having played the game for decades, you’d think I would know better, but I fell into the old trap of ‘playing the person’ rather than ‘playing the wine’.

The wine in question was a 2011 Ascheri Barolo ‘Pisapola’, and it was served to us by Jol-Vino.  I know that Jol-Vino has a love of good European wines, sometimes with a nod to Italy, and other times to Spain.  So, poured into our glasses, it was rather faded in colour, showing garnet red with bricking.  It smelt sweet and dried herbal, with earth and tar, and was pretty juicy on palate with an underlay of fine-grained tannins, and not too much acidity.  The earthiness and leathery nature grew in in depth with time, while all the while remaining sweet-tasting.  Aha – Spanish to me!  SWMBO went Italy, and she was right.  I know Jol-Vino loves Sangiovese.  So leather, and ignoring tar, I thought Central Italy.  Nah, it was north-west Italy.  Classical Nebbiolo, if I had listened to the wine.  I know that Jol-Vino has access to older wines.  So I went 2005.  It was 2011, and now I know I should have taken into account the fruit sweetness.  The wine is a modern expression, totally correct, and attractive in today’s world.  SWMBO got all the questions right.  I did not.  She played the wine.  I played the person.
Posted by Wine Noter at Thursday, February 18, 2016 No comments: 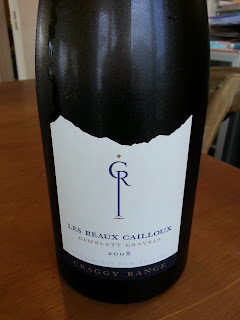 We tend to think that our New Zealand wines don’t age particularly well, especially in comparison with the classics from the Old World.  Even the more modest wines from the Old World can seem to hang in there and keep for a long time.  As a consequence we err on the side of caution and drink them relatively early.  Of course, we are often very surprised how well a wine has lasted when we do broach an older wine, but we usually temper our enthusiasm with the comment that we’ve moved on in viticulture and winemaking since then.  There are proponents of keeping New Zealand wines for lengthy times, and the wines from these people’s cellars are stunning, if these people know what they are on about.

Steve Smith MW proposed that his 2008 Craggy Range ‘Beaux Cailloux’ Gimblett Gravels Hawke’s Bay Chardonnay would be a keeper, very much as a number of white burgundies we were concurrently tasting would do so.  There was a nagging doubt in my mind, but took him at his word, as he’s a rather smart man who I respect immensely.  Well, it has been in the cellar all that time since, and the occasion called for something interesting.  Jol-Vino and the I-Spy Man were having dinner with us, so this was it!

The wine was described as being in ‘good shape’ by Jol-Vino.  She was understating the fact that it was in great shape.  SWMBO and I joined the I-Spy Man as pronouncing it sensational.  Still pale in colour, it had the most elegant, but rich layers of sweetly ripe stonefruits and tropical fruits melded with nutty and toasty oak, and the perfect amount of flinty complexities.  A wine of great depth, richness and freshness, just capturing our continued interest.  At 8 years old, it would have been deemed near the end of its useful life if judging by the label only.  In reality, it could easily last another 8 years.  Sensationally ‘good shape’ indeed.
Posted by Wine Noter at Wednesday, February 17, 2016 No comments: 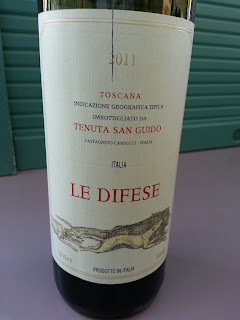 It’s a way of ensuring you are on the right track when selecting or understanding a wine to enjoy.  You’ve got to tick all the boxes which are important.  But sometimes there’s just no accounting for taste, and the wine doesn’t do what you expect.

The 2011 Tenuta San Guido ‘Le Difese’ was a gift from Ted in London.  Ted has good taste and gets good advice – tick.  The wine is from the producer of Sassicaia, a third tier – tick.  It is reputed to offer great value – tick.  There’s only 500 cases made, so a rarity – tick.

Opening and pouring it, it showed garnet hues.  Plenty of dried leather, dried herb and earthy aromas.  Then a balanced palate of moderately sweet fruit, but with plenty of textures, dryness and grip, in a dusty sort of way.  This is 70% Cabernet Sauvignon, but the Sangiovese was more prominent.  Oaking not really obvious, if at all.  Quite a serviceable red, and identifiably Tuscan in not necessarily the best way.  Everything ticked, but not quite there.  That’s life.
Posted by Wine Noter at Monday, February 15, 2016 No comments: