Glory in the Gravels

It didn’t take long for us to appreciate the quality of the Bordeaux-styled wines from the Gimblett Gravels in Hawke’s Bay.  The wines generally achieve ripeness to a delicious level, and in comparison to other districts in The Bay, they do so with more consistency.  And I’m sure there’s a unique flavour profile which I describe as ‘iron-earth’.  It is a minerally expression.  On top of it all, the soils must imbue structure, which lends seriousness to the wines.  SWMBO and I purchased two wines from the Gimblett Gravels as they showed all of the impressive characteristics of the district.  From the very warm and dry 2009 and just slightly cooler 2010 vintage, these wines are now approaching their plateau, so there’s another two-thirds of the way to go for them. 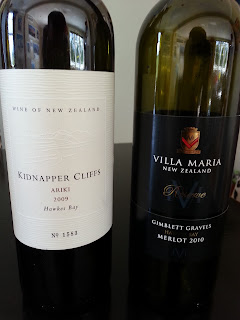 The 2009 Kidnapper Cliffs ‘Ariki’ Hawke’s Bay is a Merlot-dominant wine.  It has always had a touch of tobacco complexity.  And now, this is its feature, lending a savouriness that is individual.  Also, the extraction is not out of kilter.  Made by Pinot Noir techniques, due to the Dry River connection, the maceration was minimal.  The wines still were black as black, and they did not lack extraction.  Now, down the track, there’s a little garnet, and the textures ultra-smooth, but still with enough structure to hold all the flavours in place.  Integrated acidity, even in 2009, kept it all alive and with a future to go.  In comparison, the 2010 Villa Maria ‘Reserve’ Gimblett Gravels Hawke’s Bay Merlot was more youthful.  Black-red in colour, the fruit was more in the black plum spectrum, with liquorice unfolding.  This had vitality and life, with brilliantly balanced acidity.  And the structure more pronounced, but extremely fine-grained and powdery. Sheer class on release, still sheer class now.  Two glorious wines developing nicely.
Posted by Wine Noter at Saturday, December 31, 2016 No comments:

There are certain people who command respect.  They are royalty among the normal.  The Prince is one such man.  He’s a man of plenty experience in the making of a certain style of wine, so much that he’s earned the royal title.  It was the Prince’s birthday, and although he’d already had significant celebrations with significant others, we were graced with a visit and thus his presence.  It was an opportunity for opening a wine SWMBO and I’d had for a few years.  It was waiting for such an occasion. 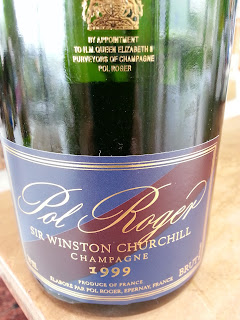 One of the most respected Champagne brands is Pol Roger.  A small house, the wines are always extremely stylish, and never extroverted. Yet they have wonderful complexity.  In my early days of wine drinking, their excellence went over my head.  It took quite a while to learn to savour and seek the detail.  The 1999 Pol Roger ‘Sir Winston Churchill’ Champagne is the house’s top expression for that very fine year.  Its actual make-up in cepage is a closely guarded secret.  But no doubt there’s plenty of Pinot Noir and also extended time on lees.  The 1999 is still youthful in that it has a real future ahead of it as shown by its concentration and fine firm depth.  But it is showing its character now.  Rich but restrained stonefuits, more yellow than white, showing the Pinot Noir heart.  And a complex interwoven amalgam of bread and nuts, from autolysis and melding with fruit.  No aldehyde coarseness at all, but interestingly with considerable textures.  Again not coarse or unwanted phenolics, but more fruit weight and extract.  The acidity is perfectly judged, giving succulence and tension.  We loved this.  The Prince sipped his glass with a big grin.  We think royalty was pleased.
Posted by Wine Noter at Tuesday, December 27, 2016 No comments:

I taste and drink a lot of new vintage wine, and will be the first to admit I don’t try nearly enough wine with bottle-age.  That’s not to say SWMBO and I haven’t had our fair share of older wines.  Just earlier this year we had the supreme delight of Ch. d’Yquem back to 1950.  On another occasion Yquem back to 1921.  And table wines as well as fortified back into the last century – well technically two centuries ago.  And New Zealand’s oldest wine at 113 years of age.  But the constant honing of the palate of such treasures does not happen.  They are exceptional circumstances and events. 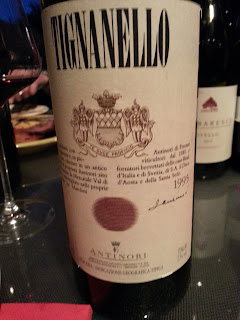 So when the Bush Man brought around to the Ness-Essaries a 1995 Antinori ‘Tignanello’ Toscana, it was certainly the older wine of what was being served by at least a decade.  Tignanello has always been an interesting mix of Sangiovese and Cabernet, each pushing and pulling.  The current mix of 80% Sangiovese, 15% Cabernet Sauvignon and 5% Franc is about as good as it has even been, showcasing Sangiovese and Tuscany, with only a little New World influence.  There have been years when it has been more a New World or classical Bordeaux- pretender (with a difference, of course).  At this age, it didn’t matter as Sangiovese and Cabernet mature to something different.  Old wine with savoury fruits, game, dried herbs and leaves, leather and undergrowth.  It’s tertiary in character, and the provenance must be ascertained from the structure and balance of other components, rather than varietal character.  This wine evolved substantially in the glass, showing it had plenty of ripe sweet and rich fruit.  The structure was still a major part, with grip, mouthfeel and textures.  Acidity still showed on the edges.  This spoke more of the Bordeaux/International style rather than the more fine textural-crisp acid and bitter flavours of traditional Tuscany.  In any case, it was a marvel to savour, as the aroma and flavour profile was so complex and vastly different to the bottles on the table.
Posted by Wine Noter at Friday, December 23, 2016 No comments:

We just love the diverse philosophies in making wine.  Some have the ‘feel-good’ aspect, and I’m thinking of ‘artisan-made’ wines, where winegrowers are in tune with the environment and their patch of dirt, and make the wine with their bare hands and souls bared.  Then there are the ‘artwork’ wines, made to catch your attention, often made to a stylistic formula, this requiring great materials and great skills.  Some people say that ‘Robert Parker Jr’ wines are the latter category.  In reality, both approaches can provide fantastic pleasure. 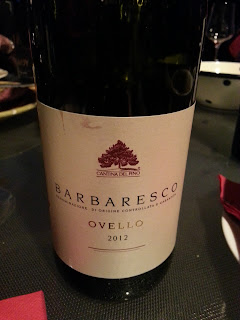 At the Ness-Essary dinner, two reds showed the two approaches.  Firstly a 2012 Cantina del Pino Barbaresco ‘Ovello’.  Initially light and not distinctly Nebbiolo let alone Barbaresco.  Paler colour, of course, with red florals and a little game and earth.  Even the feared tannins were subdued.  But decanted and in the glass over the night, this grew in substance.  The wine a little more clear and true, and the tannins growing in presence.  In the end, very highly and finely extracted.  A more ethereal style, but with plenty to allow it to age.  Will it ever get the fruit depth of great examples of Barbaresco?  Probably not.  But you could see the hands-on vine-tending on the patch of dirt, and the heart and soul in the making. 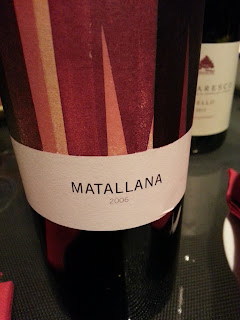 Then a 2006 Telmo Rodriguez Matallana Ribera del Duero.  Superstar winemaker with an international name and fame.  The wine made to impress I’m sure, though the winemaker would say the natural result of the vines and the land.  Saturated black-garnet red,  Deep and intense aromas and flavours of ripe black fruits, with enough sweetness to match the considerable, but fine tannins.  Savoury interest developing, and plenty of oak.  Could you drink more than a glass?  Of course, yes.  This will continue for another decade for sure.  Does it speak of Ribera dl Duero?  Or does it speak of the artistry of Telmo Rodriguez?  I’d say the latter.
Posted by Wine Noter at Monday, December 19, 2016 No comments:

What a lovely start to the dinner put on by the Ness-Essary Couple.  We knew we were in for a great night from the guest list.  We were pleased to be invited too.  Many wine bottles and many food courses lay ahead of us.  But to get the evening going, three Rieslings which showed different aspects of the variety, and also of their origin, and how the makers decided to make them.  Fascinating stuff for wine geeks, but also those who are ‘just’ into the taste of it. 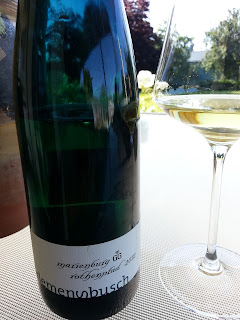 First up was a 2012 Clemens Busch ‘Rothenpfad’ Punderich Marienburg GG Riesling.  We’re loving these dry Rieslings from Clemens Busch, probably more than the fruit sweet wines as thay show variety still, but the soils of the site.  Red slate, with ungrafted vines up to 85 y.o.  Rich, soft, luscious, but dry.  Weighty, but fresh.  And florals along with spice, warmth and earth.  Just so intriguing to sip on, yet so satisfying.  Everything was in balance.  It probably was the wine of the night for most of us. 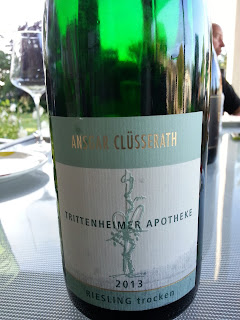 Then followed the 2013 Ansgar Clusserath Trittenheim Apotheke Riesling Trocken.  On grey-blue slat, given skin contact and wild yeast.  At 12.0% alc., it showed its cooler northerly origins.  Very Mosel with electrifying acidity.  Immaculate varietal character, and great minerality.  But the acidity stole the show.  Maybe some time in bottle would settle it down, and bring it into balance,  Easy to not like after the first wine, but there’s truly plenty there to like in reality. 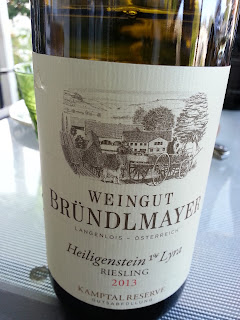 The third of the trio, a 2013 Brundlmayer Zobinger Heiligenstein 1OTW Riesling ‘Lyra’.  An Austrian relation to the two previous German wines, but no lesser for it.  From the great Heiligenstein vineyard, but this bottling from the Lyra trellised fruit, which exposes canopy and aeration.  Lovely clarity and softness of varietal fruit.  Very refined textures, and poised acidity.  Beautifully balance.  Maybe a tad more fruit power.  But sheer class here.  Still the Clemens Busch was the star, but this just behind.
Posted by Wine Noter at Sunday, December 18, 2016 No comments: 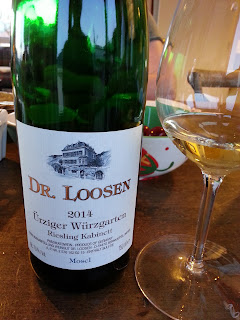 There are some wines you just can’t stop drinking.  They are o delicious that your mind is working towards the next glass, and you can’t take your eyes off the bottle.  Then you pour some more and you can’t stop the action – not that you want to.  The glass is raised to your mouth and those lips just loosen up and down the wine goes.  The sigh of satisfaction and the brightening of the eyes along with a smile automatically follows.  That wine hits the spot.  It’s perfect.

That’s how SWMBO, Jo-Vino and I see the 2014 Loosen Urziger Wurzgarten Riesling Kabinett.  We all love Riesling, especially from the Mosel.  And Dr Erni Loosen is close to our hearts.  We’ve all sat by the window in his house overlooking the river while he explains the soils of his different sites.  The 2014 wines have taken some time to come around.  But the Urziger Wurzgarten wines have a roundness and accessibility.  There’s real richness and a bit of spice, without losing any of the Mosel minerality.  Utterly drinkable.
Posted by Wine Noter at Friday, December 16, 2016 No comments: