It’s ironic that being of Chinese descent, I have tried very few Chinese wines.  Sure there’s been enough liqueurs and spirits that have not been quite that clean or somewhat coarse, and then the flavours are as if they are from another planet.  Well, to be correct, they are from another country. 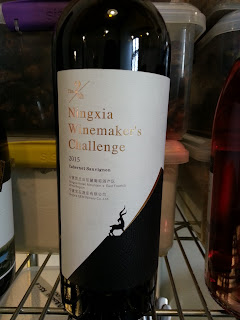 So with my background and history, it was a surprise to find the 2015 Gem Winery ‘2nd Ningxia Winemaker’s Challenge’ Cabernet Sauvignon a really delightful wine.  The wine is the result of a challenge, sponsored by the government.  60 winemakers from 23 countries were invited to make a Cabernet Sauvignon from a 3 ha block of fruit from a larger vineyard, situated in Ningxia, in the foothills of the Helan mountains between inner and outer Mongolia.  It’s Gobi Desert country.  The aim was to promote the region and exchange ideas and experience between all parties.
This wine, from the 2015 Gem Winery was made by Leo Ricardez.  The owner of Gem Winery actually hadn’t built her winery yet, so she rented space at another.  10,000 bottles were made, 5,000 going to the winery, 3,000 to the organisers of the competition and 2,000 to the winemaker.  This wine is distinctly Cabernet Sauvignon with blackcurrants, cassis and a touch of leaf.  Plenty of body, rounded and accessible with softer tannins and integrated acidity.  As I said, a really nice drink.  A wee gem, actually. 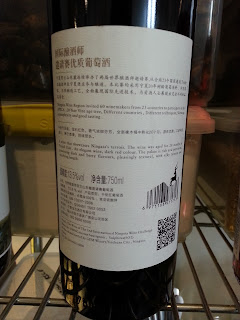 With the investment in wine in China by all sorts of groups and businesses, I will keep an open mind to what I see.  I know winemakers who spend time there, and report exciting things.  The global wine press is enthusiastic, positive and supportive.  There will be many more gems come to light in the future.
Posted by Wine Noter at Sunday, September 24, 2017 No comments: