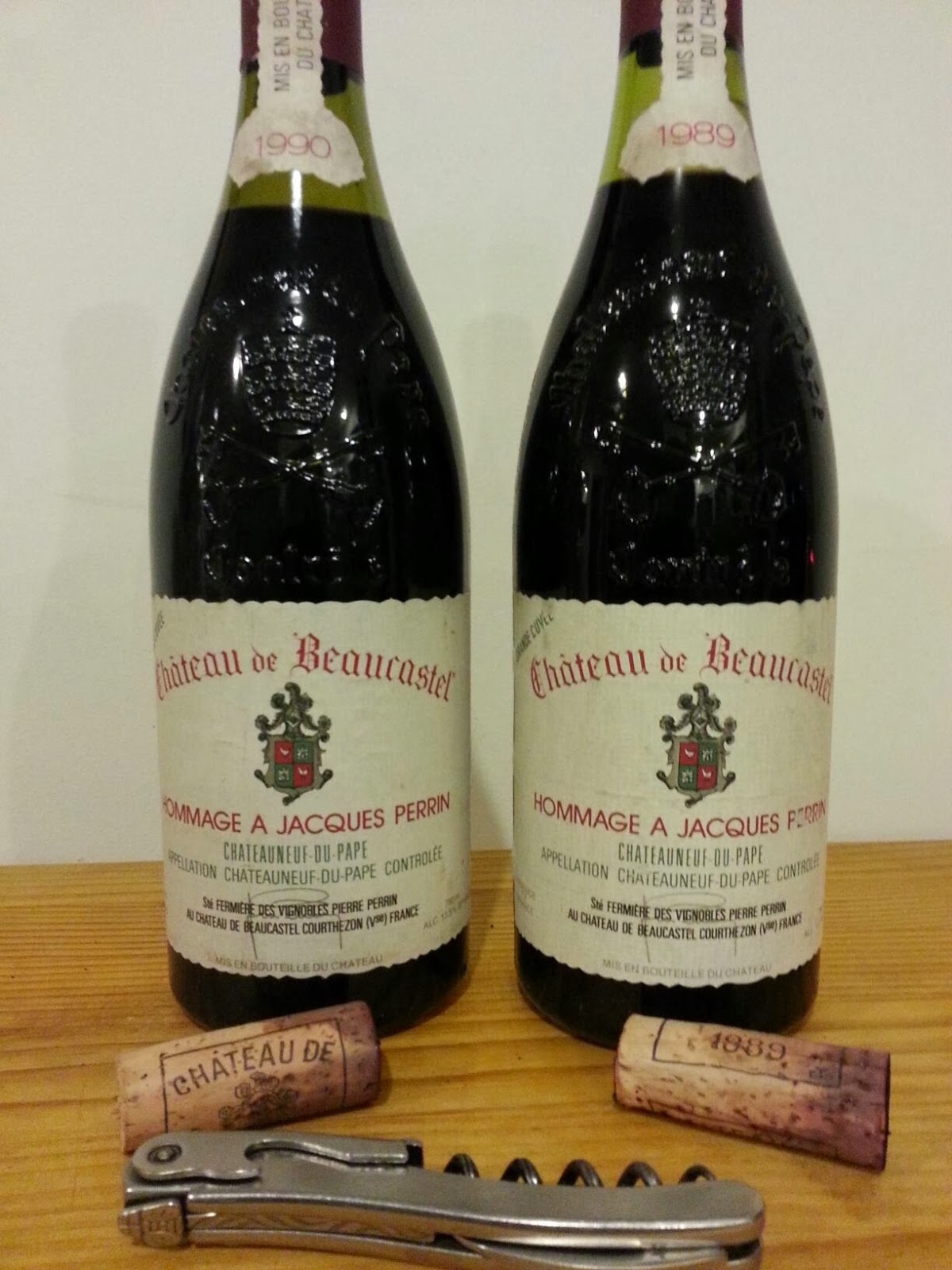 It’s a treat to share wines with Gordy and Perfect Pia, as the wines get a good going over and examination, and credit is given where credit is due.  There’s a bit of emotion, passion and soul involved to, so it’s not just clinical stuff.  And the wines actually get drunk, rather than tasted.  So there is never any hesitation to open any bottle, as the term ‘precious’ just doesn’t seem to apply.
Two ‘wine treasures’ from the long left cellar were brought out and it was fun to taste them side by side.  They were the 1990 and 1989 Chateau de Beaucastel ‘Hommage a Jacques Perrin’ Chateauneuf du Papes.  The other Mr Parker had rated them as high as he could with 100 points each.  They weren’t too expensive at the time of purchase, some 20 years ago, and if one were to buy the equivalents now, the relative costs might be a bit steeper.  The regular bottlings were pretty smart at the time, and already regarded as classics, but the ‘Hommage’ bottlings took exclusivity, concentration, complexity and detail up another level.  The two vintages were different, and both outstanding.  To the classicists, the 1989s had the edge.  For those from a New World perspective, the bold 1990s were the stars.  It meant that both had to be purchased to make the comparison through the years.

There’s been a lot of discussion about the brettanomyces-like character in the Beaucastel reds.  SWMBO would rather not put the wines into her mouth, so averse she is to the flavour.  Gordy sees the character as complexity, but is cautious, I’m sure.  I’m more in his camp.  The official line from Beaucastel that it isn’t brett, but probably Mourvedre-derived.  The wine is certainly much less expressive of it in the releases nowadays.  The cynics will say that they’ve cleaned it up.  Of course, there are those who love it, and see it as archetype Rhone, benchmark Chateauneuf du Pape.  Strangely, other labels can be packed with it, such as Domaine Pegau, especially in their rarer bottlings.  Others have practically no trace of it.  The interpretations are so varied.

Tasting these wines, the 1990 was still dark and bright ruby-red, and the nose very aromatic.  Ripe and fragrant datrk red fruits, florals, wonderfully lifted and exuding sweetness on the nose.  And intermixed with obvious game, horse and farmyard notes.  Brettanomyces in spade for me.  On the palate, amazingly sweet, luscious and almost aromatically opulent.  Not quite a fruit bomb, but certainly fruity.  The structure still supple and supportive to the fruit, rather than a major component.  The youthfulness was striking.  Even though the brettanomyces flavours were strong, the richness and sweetness of the fruit, along with the lift, made them incredibly acceptable and indeed part of the whole.  As the bottle got consumed, this being done with ease, the funkiness and gaminess grew.  Too much in the end for me.  Was the brettanomyces a fault here, when it added so much personality, and generally did not inhibit the drinking?  The fact we drank it meant the brettanomyces was interpreted positively and part of the wine.

Then onto the 1989.  My initial thoughts were the wine was very claret-like in structure, with tightness, elegance, drive and line, with very fine extraction and structure.  This is classical and classy claret, of course.  Dark red fruits with earth, cedar, cigar-box and game, with a touch of funkiness.  Did this have brett?  Not clearly at first.  Looking hard, maybe, and maybe yes.  The feature of this wine was its structure.  Great framework, a smidgen too powerful for the fruit sweetness that was remaining.  Perfect acidity.  So the mouthfeel a little on the drying side, as the fruit was on the back foot.  But then, this had layers of complexity and detail.  You wanted to eat red meat here. Or hard cheese.  The flavour interest just developed and took you for a ride.  As the bottle got lower, the funkiness intruded more and more.  But not enough to ruin the drinking pleasure.

Which one best?  Gordy finished the night not making up his mind, continuing to vacillate.  I’d call it a draw for him.  For me, it was the 1989 that was the winner.  Truly a great wine.  But for all its faults, the 1990 was a wonderful surprise.  It’s where you approach them from and how you interpret their personality that makes the difference to whether you enjoy certain wines.

Out with the Old and Try the New 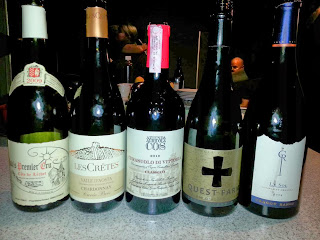 Seeing the New Year in with some of the Chosen Clan, Gordy and Perfect Pia, and Jubes and Co. gave us all the chance to clean out the wine racks of a few old and generally treasured bottles, as well as trying and sharing a few new bottles.  There began a succession of wines from sparklers to whites and reds, finishing with the obligatory sweeter wine.  Of course some wines made each one of us take note, bringing back fond memories of former glories, fulfilling expectations – or not, as well as enthusing us with undiscovered delights.  I recount a small selection.


Two European Chardonnay wines were very different, both new labels to us.  A 2009 Laurent Tribut Chablis 1er ‘Cote de Lechet’ beautifully pure and delicate, with steel and minerals, developing greater almondy nutty overtones, the palate becoming weightier and smoother in flow as it warmed up.  Gordy loved this wine and I could see why.  This is classic Chablis drinking beautifully now, but it will hold.

A polar opposite, a 2009 Les Cretes ‘Cuvee Bois’ Valle d’Aosta Chardonnay by the region’s doyen Contantino Charrere.  This was much more oaky, the fruit quite overwhelmed for most of us tasting and drinking it.  The seamless flow and elevated acidity were similarities to the Chablis, but not the oak.  Definitely stonefruits and citrus notes rather than flint, nuts and minerals.  The Italian wine showed its barrel work, lees and MLF in an obvious way.

Another newbie was the 2010 Azienda Agricola Cos Cerasuolo di Vittoria Classico DOCG, a Sicilian natural wine, being a blend of 60% Nero d’Avola and 40% Frappato, aged in vats and amphora.  SWMBO and Gordy saw the dreaded brett, but I wasn’t as fazed by it as they were.  I saw bright cherry fruit with high acid and tannins.  Sleek and firm and actually quite delicious in a gamey way.

Then onto the older wines from the cellars.  A 2008 Quest Farm Central Otago Pinot Noir, from Mark Mason’s special vineyard overlooking Lake Dunstan, a gift to Gordy and Perfect Pia.  Now maturing with savoury red fruits, broad, open and with sweetness of fruit.  The tannins now resolving, leaving the acidity in play.  Mellow and warming in personality, but to me just fading a little.  It was a good time to make room in the cellar for something else?

The last wine I’ve noted was a 2004 Craggy Range ‘Le Sol’ Gimblett Gravels Syrah.  A wine from Simon’s Chosen Cellar.  Dark and impenetrable, this could have been current vintage on appearance.  Amazing high toned black fruits and hardly any development.  Fine-grained, but serious extraction, and perfect acid.  SWMBO and I picked up a little TCA – quite forgivable in the context of the wine.  A good bottle would go another 10-15 years easily, but it was good to take this one out of the system too.
Posted by Wine Noter at Friday, January 03, 2014 No comments: