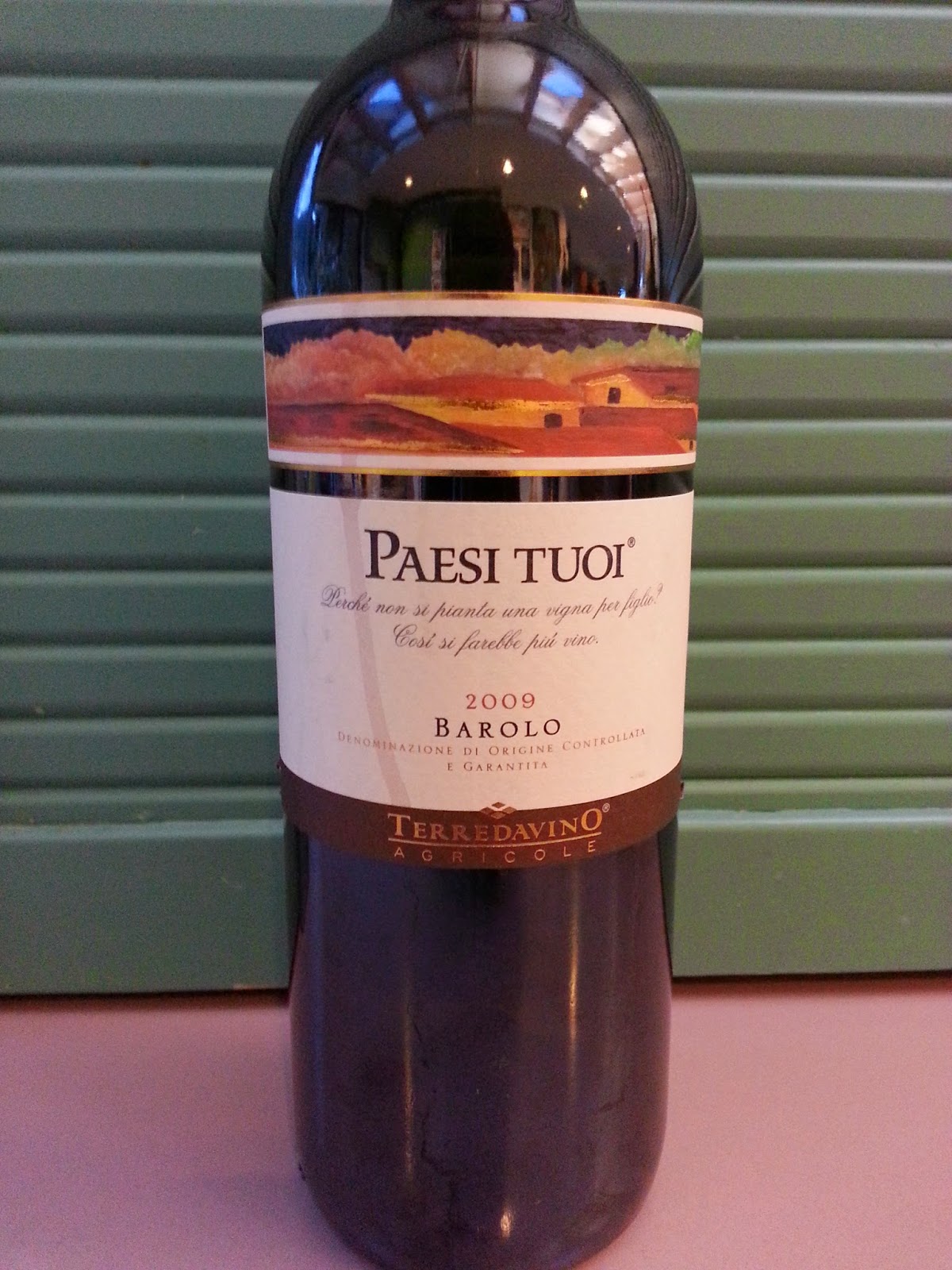 The Nebbiolo wines of Piedmont can be pretty fearsome to the uninitiated, with considerable extraction and the acidity to match.  But their aromatic beauty and complexity can be something to behold.  In a country so focussed on supple and accessible reds from Pinot Noir, aficionados of good Pinot Noirs gravitate to the more sophisticated Barbaresco and Barolo wines easily.  That’s once they experience that beauty.  How can Piedmont producers make their wines more user-friendly to the newcomer without losing their essence?

A 2009 Terra da Vino ‘Paesi Tuoi’ Barolo showed how.  It’s the more traditional rendition from a super large co-operative who are in the modern camp, and want to make wines approachable.  This wine was just that.  Big, fleshy, brawny, but rounded and soft.  Plenty of savoury dark red fruits with earth, leather and tar. Real Nebbiolo in taste.  But sweet.  Residual sugar sweet, I wouldn’t like to make the call.  The first half of the bottle went down quickly.  It helped to have venison meatballs.  Then the tannins and the honest taste of the ground kicked in for the second half of the bottle.  Suddenly, it became the Barolo as expected.  Seasoned campaigners SWMBO and the I-Spy Agent saw it the same way too. Bellissimo!
Posted by Wine Noter at Wednesday, July 30, 2014 No comments: 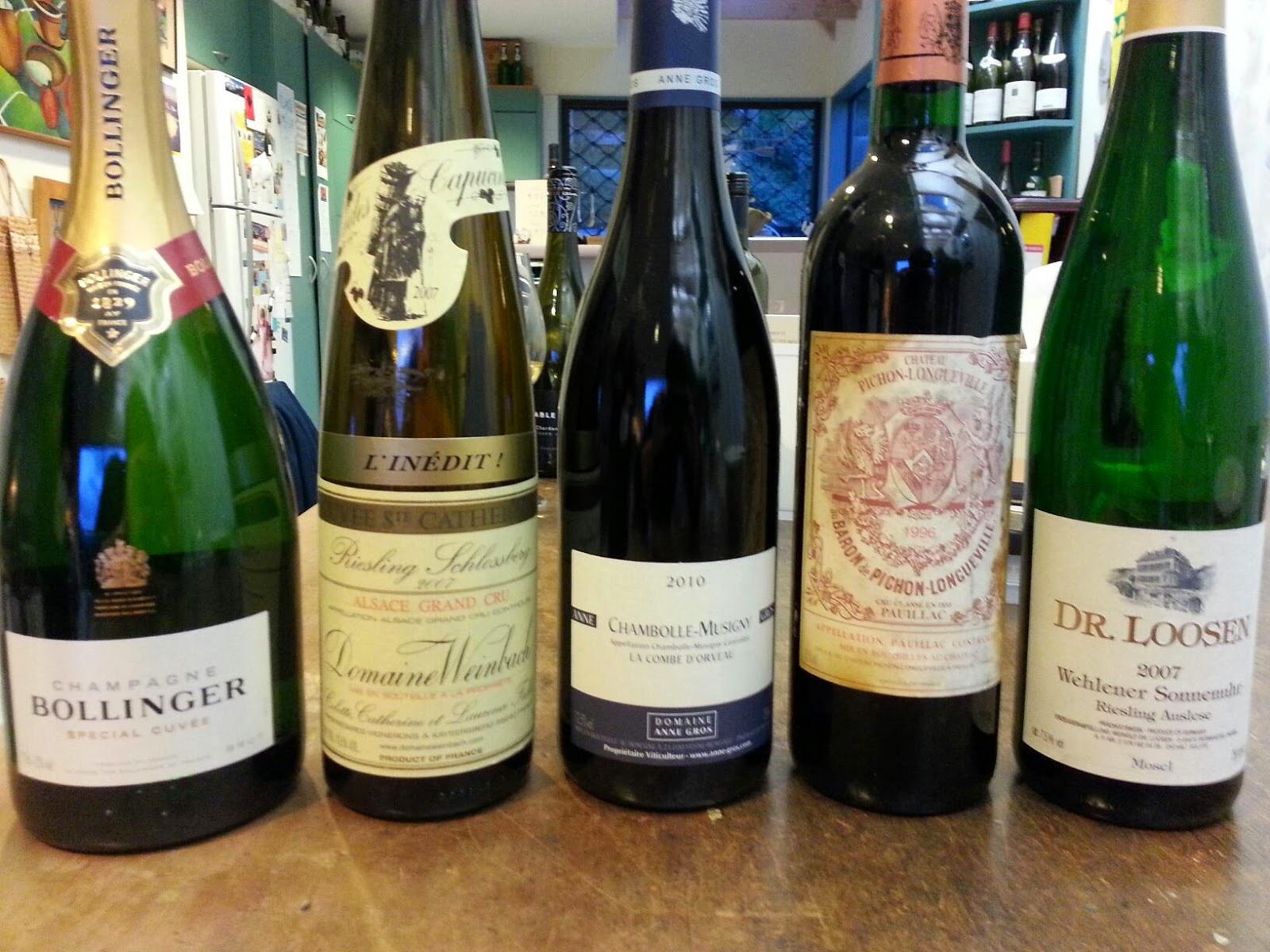 I certainly have provenance, but pedigree is debateable.  The fact that I can only determine my provenance a generation or so matters not.  I think I carry myself with integrity, and I believe those around me would agree.  The vast majority of people on this planet could claim the same, making us all a bit special.  Occasionally we all slip up, but it doesn’t really take too much away from us.

So it is with many wines.  We went out to celebrate a birthday, which is significant to thoughts on provenance and pedigree.  It was a night at one of our favourite eateries, SWMBO, The Chairman, The Young One and JoLo making up the group.  What better than an NV Bollinger Champagne ‘Special Cuvee’ to start the proceedings.  The new and elegant bottle shape reflect the lighter, less oxidative and aldehydic nature of this house as it comes to terms with the modern world.  Still delicious with its body and reliance on Pinot Noir, giving it a degree of gravitas.  It’s different, but still got what it takes.

A special bottle to remind us of the passing of Laurence Faller, taken too young.  A 2007 Weinbach Alsace Grand Cru ‘Schlossberg’ Riesling ‘L’Inedit’, my favourite serious Alsace Riesling, that combines richness and steely purity.  The memories of past vintages flooded back, but this bottle just a little soft, and maybe let down by a poor cork.  The Chairman and SWMBO not quite excited, but the rest of us happier.

By all rights the 2010 Anne Gros Chambolle-Musigny 1er ‘La Combe d’Orveau’ should have been a thing of beauty.  Afterall, Anne Gros is precision personified, and the 2010 vintage allowing terroir to speak, with Chambolle-Musigny a star place for such expression.  Indeed, the wine was fine, fresh and lacy.  Maybe too light and lean, the acidity taking control.  A pretty and aromatic wine, but on a cold night a bit anaemic.  The environs I’m sure affected our appreciation.

Moving onto the 1996 Ch, Pichon-Longueville Baron Pauillac.  A star performer for many generations, and a recognised second growth.  On a roll too, in these modern days.  Talk about provenance and pedigree, this had it in spades.  This bottle affected by the galloping disease of horsey brettanomyces.  It stopped SWMBO in her tracks.  The Chairman and I sipped on it with modest enjoyment.  Fleshy to some degree, and well-structured, quite dense, but the gamey flavours building up a bit too much in the end.  We forgave it because of its noble history. 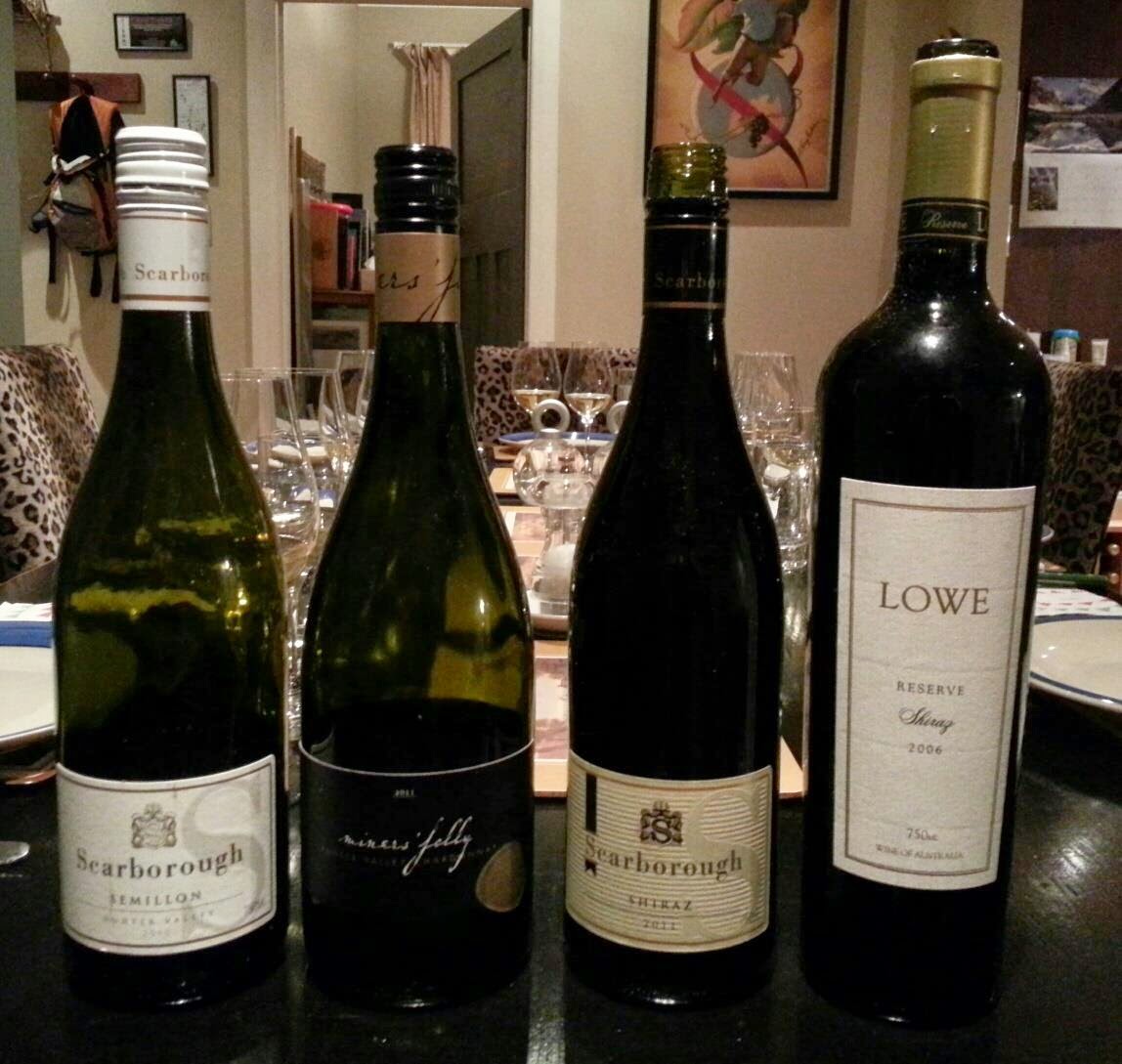 Even though New South Wales isn’t too far from here, we just don’t see many of the wines from there.  SWMBO and I visited a few years back and The Chairman took us all around.  We came, we saw, we dined and drank, and took some bottles back with us.  The Chairman visits regularly, and usually brings a gift of bubbles, but this time, he brought some of his local wines.  We’d normally have to hunt around to find such or similar gems, but here they were, delivered into our laps.  It was time to bring out our bottles, and we put together a little taste of New South Wales, with the Hunter, Mudgee and beyond to taste over dinner.

Two whites to start the proceedings, beginning with a 2010 Scarborough Hunter Valley Semillon, quite shy at first, but slowing revealing its herb, grassy and waxy, lanolin character.  No shortage of unctuous textures, but also lots of acid liveliness.  We decided we bad broached it far too early.  And it could have been a wine to last another decade.  This was definitely more in the classical and elegant style.  When we visited The Chairman three years ago, he put on a newly made 2011 Miners’ Folly Hunter Valley Chardonnay, which we didn’t appreciate well, considering it was just grapes on the vine about three months earlier.  Now, with another three years in bottle, it showed Chardonnay as we knew it.  But remarkably elegant, with fresh stonefruits and subtle wood input.  The fruit extract and smooth texture hinting at old vines, and detailed complexities emerging every minute in the glass.  Maybe we could come back to it in another three years?

Onto the reds with a hearty meal of lamb.  A 2011 Scarborough Hunter Valley Shiraz bowled us over with its bright, sweet, lifted berry fruit aromas and flavours.  Soft red fruits, jam and florals, and some fruit bon bons, and a supple tannin core.  The sweetness gave this a soft finish, but I could see this living years.  There a resemblance to Pinot Noir here.  No wonder they called Shiraz ‘Hunter River Burgundy’ in the past.  This followed by a 2006 Lowe ‘Reserve’ Mudgee Shiraz.  A big wine, quite traditional with big robust bold savoury fruit, a little secondary, undergrowth complexity, and a grunty structure, tannin extract and grip to match.  A little more than traditional, and a touch of muddiness?  Afterall, that’s what Mudgee suggests.  A strong wine with a future ahead, and powerful for its old-fashionness
.
The last wine to cap off a great night, a 1994 de Bortoli ‘Noble One’, botrytised Semillon.  Dark mahogany colour gave us the creeps, but brassy, crystallised fruits, wood and honey, still sweet, lush and decadent.  Maybe a little hard?  Maybe a touch dried-out.  But still all there and delicious raisins, wild honey and burnt marmalade.  This of course is from the Riverina, within the N.S.W. border. 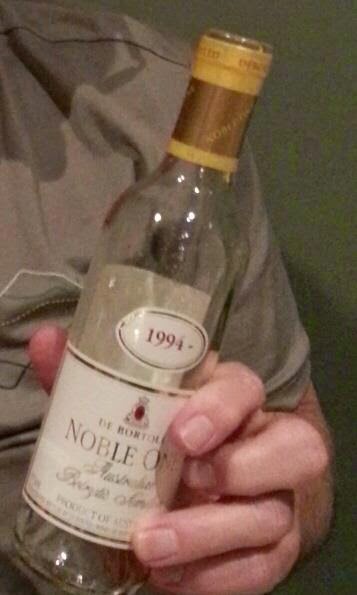 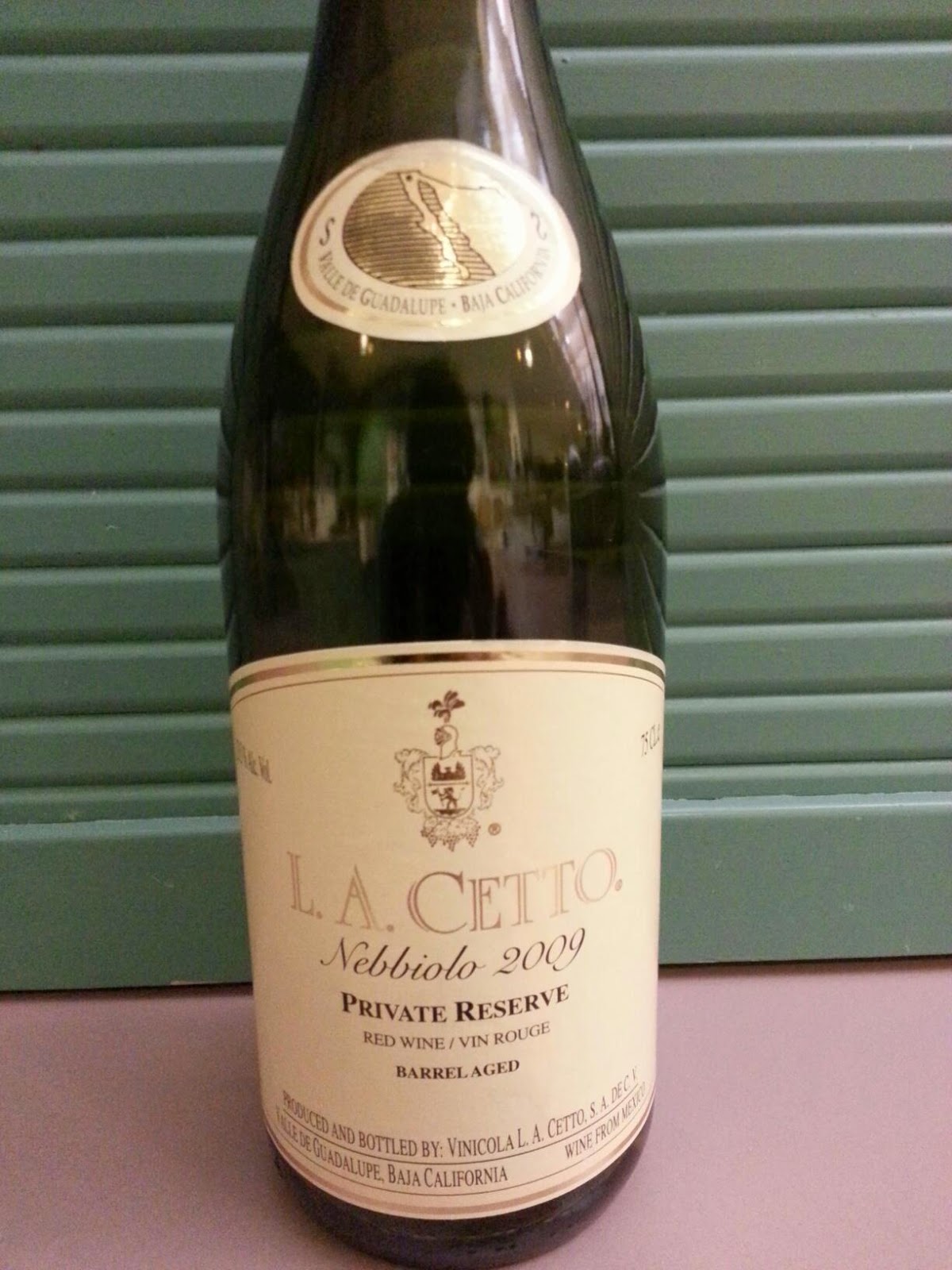 On her trip away, SWMBO was recommended the 2009 L. A. Cetto ‘Private Reserve’ Nebbiolo.  It’s a wine that Ted has thoroughly enjoyed, and it had to come home to enjoy.  SWMBO dutifully did so and opened it up with the I-Spy Agent too.  L. A. Cetto has made its way here before in various guises, and the wines have been soft and hearty, and probably reflecting their provenance more that the grape.  I originally thought it a Californian label, as it comes from Valle de Guadalupe, Baja California.  But it’s over the border into bandito country, Mexico.

And true to form, it was dark, ripe, soft and mellow in its heartiness.  The Nebbiolo just showing with a touch of tarriness to the earthy, savoury flavours.  Plenty of smoothness, but enough structure.  Maybe a little flat and oxidised.  It was an easy drink, that just slid down effortlessly, and the flavours filling the palate.  Piedmont Purists would be in shock and horror!  Then we had the wine with the meatballs and chorizo in a rich and spicy tomato sauce.  The wine just washed down the meal, and the wine came alive, picking up the spiciness.  We had crossed the border from not expecting too much, to real enjoyment.  Arriba, arriba!
Posted by Wine Noter at Monday, July 07, 2014 1 comment: