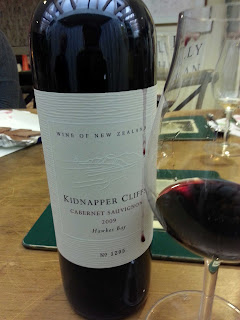 There are accepted ways to vinify the red Bordeaux varieties, as there are to make wine from Pinot Noir, and never the two meet.  Or can they?  The Bordeaux varieties can handle extensive maceration with pumping over, as tannin structure goes well with the bold and intense flavours, whereas Pinot Noir needs to be handled more carefully so as not to mask the fragrance of the variety.  So with the latter, more modest plunging is the answer.

When the Dry River Martinborough winemaking team came in to lend a hand and their ways to the making of the Kidnapper Cliffs wines at Te Awa Farm in Hawke’s Bay, now that they were under the same ownership, it was decided by Neil McCallum to apply Pinot Noir winemaking to the Bordeaux varieties.  It was a bit hush-hush at first, but word got out.  And of course there was the expected criticism, that the wines would not have the structure to show well or age.

However, on tasting the super-premium Kidnapper Cliffs wines, there was no shortage of colour, aroma or structure.  The textures were more refined.  Isn’t that what winemakers of claret want – refined structure?  Well, these wines had it.  I fell in love with the 2009 Kidnapper Cliffs Hawke’s Bay Cabernet Sauvignon late in 2010.  Black as black and with ripe cassis aromas, along with all the detail and exoticism you’d ever want.  Plus great finesse of grip and structure.  The wine wowed me, and no doubt many others, but the die-hards disagreed.  I named Kidnapper Cliffs my first-ever ‘Winery of the Year’.  It was a controversial choice.

Our friend the I-Spy Man was in town and dinner was served.  Out came a bottle of this wine.  Still black-red with a touch of garnet.  Beautifully soft, and pure in varietal aroma, with the most subtle layering of secondary development.  And same on palate, quite lush and hedonistic.  Just enough underlying extraction to hold all the fruit, wood and development flavours all together with harmony.  The balance was such that it would keep another 6+ years easily.  The I-Spy Man was impressed.  SWMBO was also taken by its beauty, as was I again.
I understand some more winemakers are employing Burgundy vinification techniques with Bordeaux red varieties now.  I can only smile with Neil McCallum.
Posted by Wine Noter at Friday, September 30, 2016 1 comment:

We all have expectations on how each country, region and district produces its wines.  It comes from your experience, hopefully over many bottles, if not years.  I must admit that Spanish white hasn’t really gotten my undivided interest.  The modern expressions are clean and correct, but don’t do a great deal further than that.  Then the really old-fashioned styles, which can be packed with character are maybe just a bit too funky or faulty. 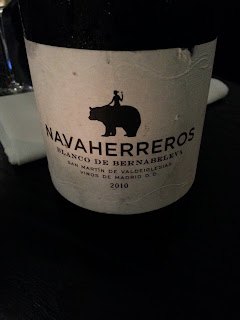 The Grunter and Gruntess were in town and dinner beckoned.  On the list was a 2010 Bodega Bernabeleva ‘Navaherreros’ Blanco.  It was deemed an interesting white, and SWMBO and I were not in a position to argue.  Looking up the details, this is a blend of Albillo and Macabeo, wines 30-85 y.o. and vinified in 500 and 600 L puncheons, and aged on lees.  Yes, really interesting.  It could turn out really good or really, really bad.  But it was the former.  Still relatively fresh with no undue age.  Lovely stonefruits with some florals and nuts.  Crisp and clean and refreshing enough, and just a little interesting detail, without any funky, grubby or oxidised flavours.  This was a New Wold style from the Old World, and delicious.  We drunk it with gusto 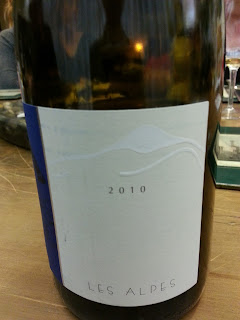 Soon after, the I Spy Man was here, and it was decided to serve him weird and wonderful instead of conventional, as we usually do.  The conventional is pretty high-powered stuff, and doesn’t ever disappoint, so it was with trepidation we opened the 2010 Domaine Belluard ‘Les Alpes’ Savoie.  Biodynamic and made from the Gringet variety.  What the heck is that?  And fermented in a cement egg.  Now that’s a recipe for funky, if there ever was one.  Sure enough, it poured out golden yellow.  And unsurprisingly it smelt oxidised and nutty.  But then drinking it, it had an unbelievable blend of freshness, unctuousness and weight.  The oxidised flavours were more savoury stonefruity and nutty.  OK, I lie a little, as there was oxidation too.  But delicious stuff.  We had a seafood curry, and it was a match so good that no-one quite believed it.  The curry became sweeter, and the wine more stonefruity rather than nutty.  Go figure.  Old World wine still Old World in character, but totally satisfying. 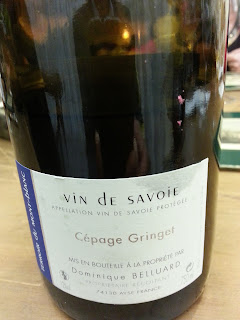 Posted by Wine Noter at Thursday, September 22, 2016 No comments:

There’s no such thing as a quite dinner without wines to think about with My Mentor and the Grey Ghost.  Wines are served with passion and purpose.  And you learn so much from them when served together in good company.  So it was with SWMBO and The Greenies.  One Rioja followed by another.  Both stunning in quality, but at different ends of the expression scale. The comparison was thought-provoking. 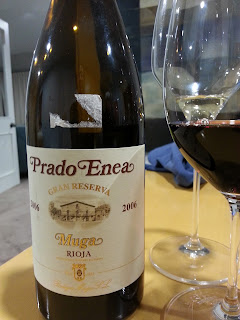 First up was the 2006 Muga ‘Prado Enea’ Rioja Gran Reserva.  Still very, very dark, and a wine that leapt out of the glass.  Super sweet, ripe black fruits and clearly Tempranillo, along with masses of vanilla American oak.  Rich, dense, lush and succulent, along with the prerequisite extraction and structure for balance.  The tannins fine enough for sure.  This was a statement wine.  “Look at me!” it shouted.  “I’m a classic old-fashioned Rioja in the best way, and I can stand tall in this modern world” it said.  This was indeed a wow wine, with many years of life ahead of it. 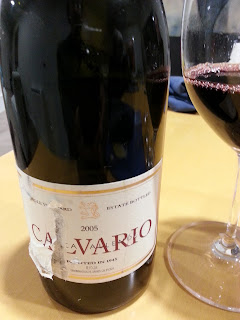 Then something a lot more stylish.  The 2005 Finca Allende ‘Pago del Calvario’ Rioja 2005.  Absolutely modern , also Tempranillo based.  But you might not think so.  Far more classical lines and structure.  Great depth, elegance, line and length.  16 months in new French oak, but perfectly integrated.  Beautiful richness, sweetness and tannin structure in gorgeous balance.  It could have been a claret, or modern red in a similar style of ‘new waveness’.  Not necessarily a Rioja, but it was.
Posted by Wine Noter at Saturday, September 10, 2016 1 comment:

It was a treat to catch up for dinner with My Mentor and the Grey Ghost.  They have been part of my formative years in wine, and also for SWMBO.  We have the greatest respect for the, their intellect, humour, and of course palates.  Whatever they chose to open and serve is well thought out and few things are left to chance.  Their nonchalance makes it easy to gloss over the subject of wine, but the wines that are tasted matter a great deal. 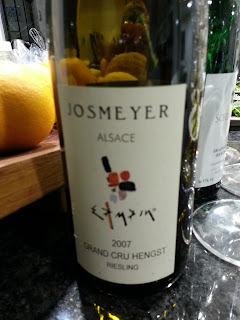 The Greenies were also in attendance, and we missed out on the first wine, a Mosel Riesling, but we joined in on the second, a 2007 Josmeyer Alsace Grand Cru ‘Hengst’ Riesling.  Still youthful in colour and fruit expression, with white florals, limes and stonefruits.  Remarkably clean and without the distraction of Euro-funkiness.  No trace of toastiness at all yet.  But quite satisfying to drink with its weight, core, linear palate presence.  Rounded in the mouth, but still fresh and vibrant.  A richer aperitif for sure.  It went down nicely. 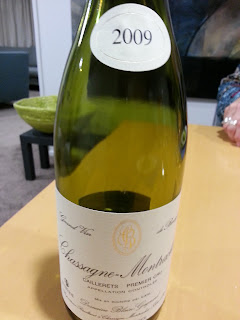 The Grey Ghost had served a salad.  My Mentor served with it to us a 2009 Blain-Gagnard Chassagne-Montrachet 1er ‘Caillerets’.  Classical white burgundy from the Puligny-Chassagne spectrum.  I jokingly said “no such thing as pre-mox” as it was spotlessly free of any such spoilage.  It was just pure fruit with a sweetness, ripeness and juiciness of white stonefruits.  Ripe and rounded in body, but with good acidity.  Not the acidity of the 2010s for sure, and a slight failing in the wine for My Mentor.  But so such worries for us.  As the wine developed in the glass, the slightly more rustic Chassagne than Puligny nature emerged.  Distinctive hazelnuts then almonds over the near white floral-stonefruits we originally saw.  There was a bit of spice in the salad, but the wine shone through.
Posted by Wine Noter at Thursday, September 08, 2016 No comments:

Fromm the Back of Beyond 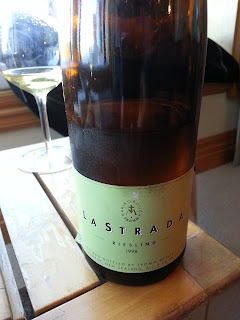 We find it amazing and warming that friends bring out wines they have had squirreled away for years and share them with us.  It’s even more amazing when the wines are drinking sensationally, especially when they have had ‘extended bottle age’.

Now I won’t say that The Bassinet Babes had forgotten about this wine they had.  They’d actually bought a few bottles on the strength of their convictions of the quality and potential to develop.  They’d say they were lucky with this last bottle they opened, but SWMBO and I know they have good palates and the acumen to make good cellaring decisions.

The 1998 Fromm ‘La Strada’ Marlborough Riesling was like any top class mature German Riesling to me in many ways.  Bright yellow with the aromas of citrus fruits, honey and toast and some cream custard which is our signal for something special from the Mosel.  Medium sweet and low alcohol, and surprising body presence.  I thought Mosel, but SWMBO correctly guessed N.Z.  Just not quite enough acidity for Mosel, if I’d thought harder.  At 18 years old, in remarkable condition and drinking on its plateau, maybe near the end of it.  A suggestion of drying a tad, but that’s a quibble.  Absolutely delicious and it went down a treat and quickly.
Posted by Wine Noter at Tuesday, September 06, 2016 No comments: