About a year ago, Jubes pulled out of her cellar a wine I’d recommended for her to keep and enjoy when it was mature.  Sometimes such suggestions can come back and bite you in the bum, when the wines haven’t aged that well.  But to be fair, we tend to not make too much of an issue if that’s the case.  Afterall, who can truly predict how well a wine will age?  The wine in question was the 1993 Stonyridge ‘Larose’ Waiheke Island Cabernets.  It was green and acidic, but very powerfully blackcurranty.  It seemed it could live many years yet, without much change and not much pleasure would be gained by doing so.  That’s life.  The comparison wine was a 1990 Benfield & Delamare Martinborough Cabernet/Merlot/Franc, which had developed beautifully. 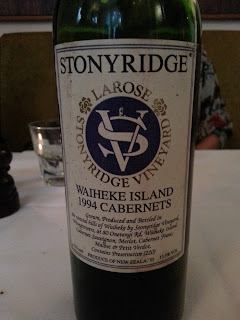 So I thought I’d test myself with a partial re-run.  SWMBO and I dug up from the depths of the cellar, my last bottle of 1994 Stonyridge ‘Larose’ Waiheke Island Cabernets.  This had been cellared as at the time of purchase, it was a hot prospect and deemed a great example of our interpretation of the Bordeaux style.  Waiheke Island was the place!  And also a collectable on a more sombre note, it commemorated the passing of Stonyridge’s owner Stephen White’s business partner John McLeod who passed away in 1994.  A tribute wine in the true sense.

The wine was still dark-red and the initial impression was of vigour.  Blackcurrant flavours prevailing along with a herbal edge.  Yes, our viticulture has advanced by leaps and bounds since, and this level of greenness would be too edgy nowadays.  Having said that, still sweet, and with some savoury secondary interest too.  Complexity in a degree of sorts.  Still with tannin grip and with acidity.  We had the wine alongside a 2014 Hawke’s Bay Merlot, which showed how far we had come.  The 1994 wine wasn’t too dissimilar to the 1993 tasted a year ago.  Despite my predictive forecasting on this wine proven wrong, the dinner table guests were very forgiving.  The wine was nearly a quarter of a century old.  Who can tell where things will be that far ahead?

Posted by Wine Noter at Wednesday, February 28, 2018 No comments:

It’s almost a contradiction but it’s true – there can be delicacy with decadence.  For SWMBO and I, it’s the style of the sweeter German Riesling wines at the Spatlese and Auslese level.  In today’s world of searching for greater sugar levels that define these pradikat categories, but a super-rich Spatlese can certainly fit into the Auslese class in overall character, and likewise, a more elegant Auslese can be mistaken for a Spatlese.  Then comes into play the factor of age.  German Rieslings can age develop richness without showing too much age and older wines retain their freshness. 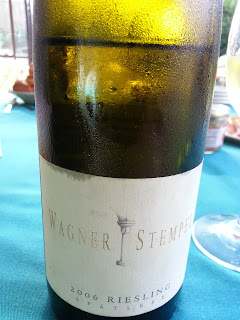 A lovely catch up with The Sticky Lady showed the above premises to perfection; she too is an avid German Riesling fan, so was keen to serve up a couple of fine examples.  The 2006 Wagner Stempel Siefersheimer Heerkretz Riesling Spatlese from the Rheinhessen was a stunning start to the evening,  As with many classy examples, this was creamy in texture with cream custard overtones – something we love.  Lovely in its fresh citrus, floral and honied fruit and just the right amount of toasty and kero mineral-like notes.  The softer acidity certainly added to the richness and luscious textures.  This was all there and ready now. 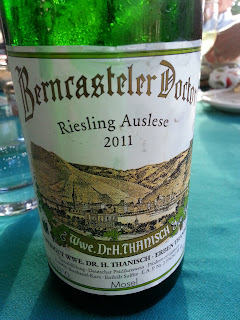 Then a 2011 Dr H Thanisch Bernkasteler Doctor Riesling Auslese from a famous estate and top vineyard in the Mosel.  The Doctor is a little lost in the wake of many other stunning Mosel releases, but the critics of old werer right on the button in having this site as something special.  Fantastic elegance and intensity of florals, citrus, honey, and some toast and minerals.  The tell-tale sign of cream custard just appearing.  But then a spine of tingling acidity lending cut and zestiness.  Clearly a little fresher, through being a younger wine and its Mosel provenance.  Both both wines truly decadent and delicate to make them beautiful and in no way over the top.

We have had these bottles for a few years now, not a very long time, but long enough to see how they had matured for the early part of their lives.  They were big boys on release, statements of their varieties and style, and packaged to be as impressive as the wine was.  So at a dinner party with plenty of good wine friends, it was time to open them. 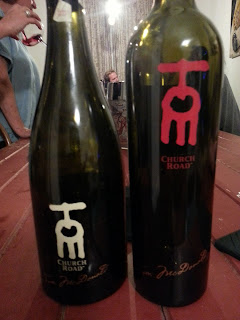 The 2010 Church Road ‘TOM’ Hawke’s Bay Chardonnay was a bit of a gunflint monster on release, and a little divisive as it was full-on.  I felt it has all the fruit you could want, and the oaking powerful, but in balance.  You’d think at this stage of life it would be fully mature, and show how good it really was.  Time tends to see the wines veer in their inherent direction, often downwards through imbalance.  But not this.  The wine had come together and integrated.  Any hard edges had disappeared, and the gunflint was integrated with the stonefruit and nutty flavours.  The wine wasn’t expansive or effusive, but rich and well concentrated in a soft way.  Lovely layers of detail, and not so much a statement now.  Delicious drinking.

Pairing the above wine was the 2009 Church Road ‘TOM’ Hawke’s Bay Cabernet Sauvignon/Merlot.  Again on release this was a strong and big wine.  Not monstrous by any means, but packed with concentrated flavours and plenty of grip to match the rich fruit.  I though at the time this would need a decade to show what it had.  The firmness of blackcurrant and plum fruit with a touch of herb was pretty well classical in the Bordeaux camp.  And what a pleasant wine this is turning out to be.  Still sweet-fruited with just the right amount of structure, and only the beginnings of development with detailed secondary notes.  It still can handle another decade if need be.

These wines are named after Tom McDonald, who is regarded by many as the ‘father of modern New Zealand wine’, his Cabernet Sauvignon wines of the 1960s drawing favourable comparisons with Margaux wines by Andre Simon.  I never net Tom, but he was a man of stature, a big man in every sense, with a commanding presence and quickly earning respect.  He’d be pleased with these wines named after him.

Here we were, gathered for a grand dinner, and lots of wines, great and friendly being opened and shared.  Not to out-do everyone else, but to share the love.  Our group had travelled the world, individually and together, and the wines brought to dinner were remembrances of the good times they had. 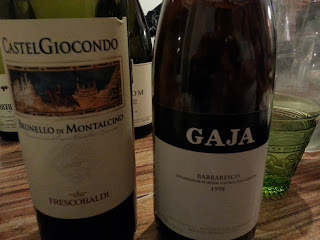 It was a case of Italiano Classico when two reds from great Italian winegrowing regions appeared on the table together.  Firstly a 2011 Castelgiocondo Brunello di Montalcino.  This from the great Tuscan house of Frescobaldi.  The classiest expression of Sangiovese for most, and the ‘Riserva’ bottlings best regarded, as the wine worthy of extended maturation.  This bottle wasn’t, but some bottle age had seen it develop lovely complexities to the savoury bitter cherry and dark-red berry fruits.  Lovely dried and dark herbs and a bit of earth, a touch of game,  But all the while with fruit sweetness.  All backed by decent and serious structure.  Delicious and we thought hard to beat, at least so far.

Then the 1998 Gaja Barbaresco.  Legendary stuff because of the legendary Piedmonte producer.  Sure his single vineyard bottlings are his best, but the ‘regular’ Barbaresco has it all – given some time.  Nebbiolo causes wonder and consternation among wine lovers, especially those keen on Pinot Noir.  Sure, there are similarities, but in reality, for me, Nebbiolo is in a different league.  It has more solid fruit expression, it being much more deep in constituency.  Then there’s the more elevated acidity.  But it’s the tannin structure in the best wines that takes it up another level.  And it is proven to develop wonderful complexity and layers of flavour.  This bottle retaining its succulence but also with awe-inspiring game and funkiness.  Borderline stuff for the technocrats, but other-worldly for those who love a touch (or more) of corruption.

A treat to try these, and in fact drink them.  It made a classic great night.