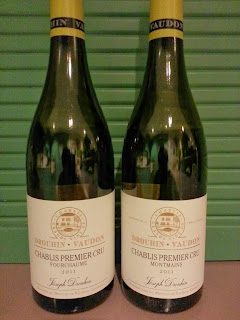 Maybe I’m a control freak.  I know SWMBO is one.  Relatively so, as we all must know when to let go and be a little spontaneous.  The two bottles of premier cru Chablis had been calling out to be opened, and normally, I’d have waited to open them, at the right time, but what the heck, I took ownership of the issue and out came the corkscrew.  Ownership ensures things happen and happen well.

The two wines demonstrated that too.  Both from the Drouhin-Vaudon stable, Domaine Joseph Drouhin adding the name of the historic mill that straddles the Serein river to the title to announce their ownership of around 40 ha of prime vineyards in the vignoble.  We compared the 2011 Drouhin-Vaudon Chablis 1er ‘Fourchaume’ with the 2011 Drouhin-Vaudon Chablis 1er ‘Montmains’.  The former made from wine and fruit purchased from other growers, whereas the latter from their own vineyards.  The former was broader, more forward, a little nuttier and oxidative, the latter sweeter, more refined and crisper with great delicacy.  Both were typical and were as expected, but the differences were noticeably significant.

There’s the input of the site at play here, as Fourchaume is the bigger, more robust wine, and the Montmains lighter.  But does ownership of the wines mean greater care in growing the grapes and the handling in the winery?  Ostensibly there shouldn’t be any difference in how the grapes are converted to wine, as the modus operandi philosophy is overarching.  But what about at a subliminal level?
Posted by Wine Noter at Wednesday, November 06, 2013