Over the years, my impression of Priorat wines has been pretty consistent. This pre-phylloxera region now rediscovered and revitalised with a number of classy producers in action there.  The red wines have been pretty solid, and usually black-fruited with density and structure.  Garnacha is there, but also a host of other varieties including Carinyena, Cabernet Sauvignon, Syrah and Merlot after new plantings made.  The 2007 Scala Dei ‘Cartoixa’ I noted a couple of months ago was a good example. 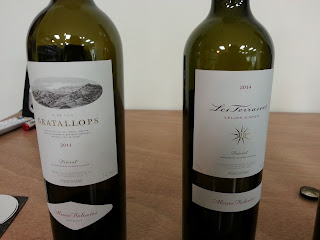 One of the ‘new wave’ makers Alvaro Palacios has starred over the last decade plus, notably for his ‘L’Ermita’ Priorat, a wine of regal proportions and regal pricing.  His wines have evolved to show greater elegance and now they are bright, juicy and raspberry fruity, but still with density of core, but fine-grained.  He’s eschewed Cabernet in favour of Carinyena as he believes it shows terroir more clearly.  His accessible 2014 Alvaro Palacios ‘Les Terrasses’ Priorat is a perfect example.  Tasting it now, you could be forgiven that it’s a Garnacha that could come from anywhere, as it’s so modern.  Yet, originally designed as an affordable label, it has been elevated to serious ‘village’ status now.

But I’ve noticed his wines seem to age rather rapidly.  With just 5 years down the track, they get pretty complex and savoury.  Not as complex as say great Chateauneuf, but the wines are gamey and they grow in density.  Suddenly they appear more like what I expect in Priorat, rather solid and chunky.  Is it terroir reasserting itself after Alvaro’s winemaking for finesse?  The 2011 Alvarao Palacios ‘Gratallops’ Priorat is as dense and dark fruited as any from the region.  Maybe it’s a case of try as you may, terroir will always come through?