There are many opportunities to look at pairs of wines which are in essence made identically, varying in maybe only one factor.  It’s how winemakers work in singling out important variable which affect the outcome of the wines they make.  For the consumer, it’s a wonderful exercise in learning more – maybe not quite as focussed as the winemaker, but nevertheless an enjoyable step upwards in the path of wine knowledge. 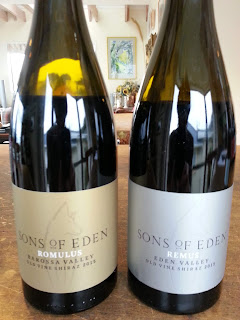 We had the opportunity to compare vinous twins with the 2015 Sons of Eden ‘Romulus’ Barossa Valley Old Wine Shiraz and 2015 Sons of Eden ‘Remus’ Eden Valley Old Vine Shiraz 2015.  These are among the best wines from Cory Ryan and Simon Cowham who have done wonderful things with specially selected parcels of fruit in the Barossa and Eden Valleys where they cut their teeth in winemaking and viticulture respectively.  Interestingly enough the wines are named after the twins who founded Rome after being suckled and raised by wolves, as legend has it.  Romulus was the stronger and more forceful sibling, and Remus the more refined; Romulus eventually killing Remus.

Cory and Simon have named these twin wines after these mythical twins.  The Romulus is old vine Barossa fruit, 60-80+ y.o., fermented to 14.5% alc. and aged 20 months in French oak, whereas the Remus is old vin Eden Valley fruit, the vine maybe not so old at 50+ years, fermented to 14.5% alc. and aged 22 months in French oak.  The biggest difference is the fruit origin, the Remus from a higher elevation, thus cooler and slower ripening with finer soils.  The 2 months extra oaking is relatively insignificant.  The wines show their regional provenance.  The Romulus the bigger and more powerful wine with blacker fruits, greater ripeness, more richness and structure.  I loved this.  The Remus with more filigree, aromatics, finer textures, fresher mouthfeel, a little eucalypt, but sill very Shiraz,  SWMBO loved this.  As usual, at this level, both wines are great, and it’s a matter of personal preference which one you like the most.