The high profile Craggy Range winery in Hawke’s Bay has its ‘Prestige Collection’ as its flagship.  The wines were first launched with the 2001 vintage at the winery opening, and they were sensational at the time.  The range consisted of the ‘Les Beaux Cailloux’ Chardonnay, ‘Le Sol’ Syrah, ‘Sophia’ Merlot-based blend and ‘The Quarry’ Cabernet Sauvignon predominant wine – all from their Gimblett Gravels vineyards.  If you needed to make a statement of your arrival on the scene, this was the way to do it.  Then later came the ‘Aroha’ Pinot Noir from the company’s vineyards in Te Muna Road in Martinborough, the first being the 2006 vintage.

For several years, this diverse selection of wines was released as a group, and they were looked forward to every year by keen enthusiasts.  But viticulture and vintages being what they are, there’s always a fly in the ointment.  The Chardonnay vines were virussed, necessitating them being pulled up.  So no ’Les Beaux Cailloux’ from 2011.  Also, the growing seasons weren’t hot enough for a number of years, so no The Quarry since 2011.  There was no ‘Aroha’ in 2010.  The ‘Prestige Collection’ looked a bit skimpy’ from then, but true wine lovers knew it was to protect the brand, as well as the consumer. 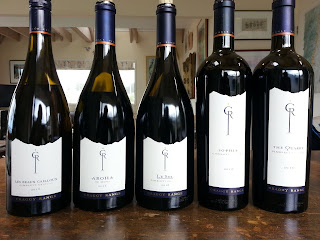 Come this year, and the 2016 vintages of the ‘Prestige Collection’, and we have a full house!  And the wines are delicious.  The overall style is of greater elegance, something that Craggy Range have wanted to achieve after the blockbusters of the past.  Vintage 2016 had a hand to play too, especially with the Gimblett Gravels wines.  A very cool and wet start to the growing season worried growers – would the fruit get ripe?  Then a super hot autumn meant the ripeness caught up.  I can’t help that think the cooler start have given these wines elegance.  The 2016 ‘Les Beaux Cailloux’ Chardonnay Gimblett Gravels is a concentrated wine, more in thenutty stonefruit spectrum, rather than sweet or gunflinty.  The 2016 ‘Le Sol’ Syrah Gimblett Gravels is a beauty with exotic spices and freshness.  The 2016 ‘Sophia’ Gimblett Gravels is dense and rich plums, classical Merlot, showing oak inputs.  And the 2016 ‘The Quarry’ Gimblett Gravels has clarity of Cabernet Sauvignon fruit with wonderful intensity.

2016 was an outstanding, even growing season in Martinborough, and the 2016 ‘Aroha’ Te Muna Road Martinborough Pinot Noir reflects this with its ripeness, and more importantly its completeness in the way it is constructed and how it flows across the palate. Overall, this is a great release and worthy of the excitement around it.