Most of us strive to drink the best we can under our circumstances.  Some wine lovers subscribe to the practice of buying and drinking slightly more that we can really afford to!  Both SWMBO and I are guilty of it.  Sometimes you’ve just got to indulge yourselves.  But occasionally, something just pops up to take that monetary pressure off – a really delicious wine that is very affordable.  We go to our local wine merchants to get such bargains, as it’s their job and joy finding such gems.

One such vinous wonder came in front of us just recently.  The 2018 Yalumba ‘Y Series’’ South Australia Viognier.  Now this was a wonder variety over the past few years, but has lost popularity, maybe because Chardonnay has come back, and there’s a plethora of new and innovative varieties coming on the scene.  The variety nearly became extinct after WW2, but it got revived by a handful of far-sighted growers in Condrieu – gotta love those Guigal people!  The Aussies have picked up on the style of Viognier too, with Yalumba at the fore, and they may have the southern hemisphere’s largest plantings and output.  They make a super pure but complex-aging top cuvee ‘The Virgilius’.  Then they have the ‘Eden Valley’ tier, with a contemporary ‘Organic’ Viognier.  The most accessible one in price is their ‘Y Series’.  In N.Z. it sells at an unbelievable $16.95. 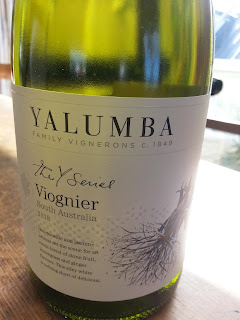 The wine is super fresh, crisp and pure.  Clear-cut varietal expression with exotic stonefruits and florals, and on the palate unusually brisk, refreshing acidity, but also the tell-tale richness and hint of unctuousness.  It isn’t going to be complex or sophisticated by any means, but this is just so delicious drinking.  It’s a little ripper.