Cruising for a Brunello Bruising 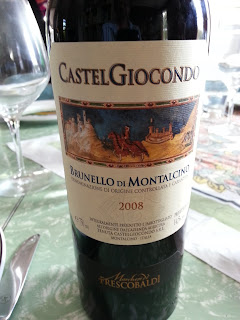 The big Tuscan wine is Brunello di Montalcino – Sangiovese at its greatest or ‘grossest’.  Getting together with Lazza, Cazza, Hazza, Sazza and SWMBO you’d think certain wines would turn up – such as Pinot Noir and Burgundy.  But not so.  Instead there were two Brunellos.  Not Riservas, mind you, but still the genuine articles to be able to make a good comparison.  Tasting the two together, it was hard to find the commonality.  If you were playing wine options, or were a WSET student, you’d be on a cruising for a bruising
.
The 2008 Frescobaldi ‘CastelGiocondo’ Brunello di Montalcino was thoroughly modern in its message.  Dark red colour at its heart, maybe a little black too, but with a touch of garnet.  Full nd immediately fruity on the nose, with ripe red cherry and berry fruit, savoury and sweet.  Lazza and Hazza noted the prune-like super-ripeness.  On the palate full and rounded, but with structure. Still up-front in style though.  Thoroughly appealing and an accessible wine with immediacy and consistency.  It got a tick of approval, despite the sweetness and warmth, and though its ‘Brunello-ness’ was hard to see.

The 2007 Biondi-Santi Brunello di Montalcino Annata was a different beast.  Almost animal and the initial impressions were not great.  TCA?  No, but bottle-stink for ure.  Garnet red, fading with bricking and some vivid orange.  Tight and elegant, but slowing building to show its tight and concentrated core on nose and palate.  Savoury, dried herb, earth, game and bitter cherries.  Euro-funky for sure.  Building in structure, grip, and plenty of acid freshness on the palate.  This got better and better.  True blue Brunello became the conclusion. 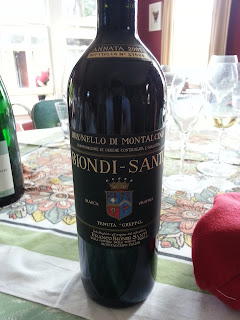