Fresh as a Daisy

We all know some wines have the capacity to age well and develop, whereas others are made to drink soon after they are made, Of course there are special bottling of the latter that surprise us.  But essentially those that keep well have precedence (or is that precedents!).

Hunter Valley Semillon is one style that has the ability to last well, and it also changes dramatically in character.  It is said the cooler vintages best suit the long-aging ability, and that the traditional, minimally intervened wines of old do o too, and show beautiful complexity.  The modern, more fruit-expressive versions don’t seem to behave quite as well, but they still cellar and improve too. 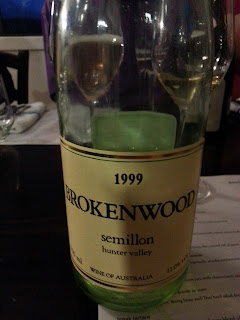 It was a treat when The Knotter brought to dinner a 1999 Brokenwood Hunter Valley Semillon.  This is in the modern camp, and deliciously bright with tropical fruits and herbs on release, rather than austere, shy and rather non-descript as in the more traditional wines.  But this too had developed beautifully with bottle age.  Not gloriously, as glory isn’t beautiful.  This was still fresh as a daisy with florals, white stonefruits, herbs and a touch of toast, and maybe a suggestion of honey.  The wine was a stylish and elegant drink, the complexity reminding both SWMBO and I of how a beautiful Chardonnay can show.  However, I’d put money on this Semillon lasting even longer.  Thank you to The Knotter.
Posted by Wine Noter at Tuesday, April 04, 2017