The Turbo Chicks are really supercharged.  Everything they do id high powered, but in the nicest way.  They are gorgeous girls who once are your friends, they are so for life.  It was at a dinner at the Knotters that they yet again demonstrated their generosity.  We all contributed very smart wines, but theirs was something special; something they’d held onto to share with their dearest friends. 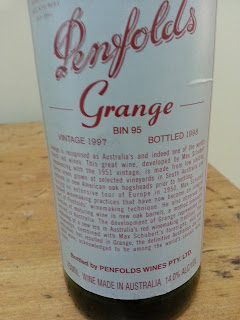 The wine too was turbo-charged, just as the girls are.  They’d had the 1997 Penfolds ‘Grange’ in their cellar for some time.  It was a gift from one of the girl’s brothers, who had now passed away, making the bottle even more dear to their hearts.  Out it poured – black-red, impenetrable, but with some garnet showing to prove it’s age.  It was no pup.  Then a voluminous and densely packed nose.  Loads of ripe blackberry fruits with game and earth, with savoury secondary layers.  Still plenty of vigour and no sign of being anywhere near maturity let alone past it.  On palate, the same masses of ripe flavours of sweet blackberries, plums liquorice, earth, game then a whack of oak, but also a rusticity to show it had character as was not all polish.  This was a down-to-earth wine, like the Turbo Chicks.  It could only be Grange, with the size and robustness.  The 1998 Grange we had recently, though slightly corked, had a sense of refinement and class.  A great bottle of the 1998 would have taken one to new heady, sensorial heights.  But this 1997 was one for the soul and the guts.  And because it was so, it was very honest.  Like the Turbo Chicks.
Posted by Wine Noter at Friday, April 28, 2017