When the ever-reliable and premium Hawke’s Bay wine producer Mills Reef (winery based in Tauranga) announced the release of their new super-icon range called ‘Arthur Edmund’, at a retail price of $350.00 per bottle, I was shocked.  Up until now, the super-premium ‘Elspeth’ range of wines were priced at $50.00 per bottle.  I was so surprised that I dialled up the general manager of the company to ask about the asking price for the new wines, which he instantly understood from my tone that I didn’t approve.

In retrospect, I shouldn’t have been shocked, or even mildly surprised.  SWMBO and I often taste and drink wines that cost far more than this.  And often older wines which you can’t put a value on in reality.  And we have opened these wines willingly, or shared them when opened by others, acknowledging their cost with barely a nod – but then, all parties are aware of the cost of the bottle – but we don’t make too much of a deal about it.

In explaining Mills Reef’s situation, he pointed out that these were the very best wines they could make.  A project starting in the vineyard a decade ago, identifying the best vines, from the best rows from the best plants in the best sites in the Gimblett Gravels.  Then the once-in-a-lifetime 2013 Hawke’s Bay came along.  It was the right time to make their ultra-Cabernet/Merlot blend and Syrah wines.  Of course, the lowest yields, the most sensitive handling, careful monitoring, minimal movement, but good time in 100% new oak, because the fruity was so rich.

Then came the truth.  The ‘Elspeth’ wines – next tier down now – like many other New Zealand wines of the same standard had proven themselves to sit comfortably among the very best Bordeaux and Rhone wines, and with comparable wines from other countries in many, many ‘blind’ tastings around the world, as judged by the best professionals.  And these wines often were 10-20 times the price!  There are a number of other New Zealand reds that ask the high price, if not more than the $350.00 per bottle here.  The best New Zealand wines are seriously undervalued in a global perspective.  And it takes a few bold producers to remind the consumer this is the case, and set the higher standard.  Of course, in setting the standard, one must not make these wines become luxury goods and commodities.  They are still wines to be drunk and enjoyed. 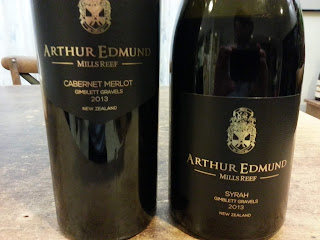 What did they taste like?  The 2013 Mills Reef ‘Arthur Edmund’ Gimblett Gravels Cabernet/Merlot – was black as black with a beautifully sweet and rich, ripe core of black fruits.  No over-ripeness, but perfectly judged picking.  Superbly refined tannins, and plenty of them, and great acid vitality.  Seamless in other ways, and great sustained finish.  Not a foot out of place, and 15-20 years ahead of it if required, though I’d drink it at 10 years.  And the 2013 Mills Reef ‘Arthur Edmund’ Gimblett Gravels Syrah.  Black-red, and super luscious and layers of sweet, ripe black and dark-red fruits, with exotic spices and florals, and black pepper.  Again, wonderful tannin structure, but the fruit sweetness ameliorating the textures to a lusciousness.  Deceptively easy to drink, say 10-15 years plus.  But I’d start about 6-7 years on.  Both wines unveiling the classical ‘iron-earth’ character in the glass and next day.  These wines show place, time, and the sensitive hand of men.
Posted by Wine Noter at Monday, December 03, 2018