It has been a couple of years that the Engineer and the HOT Babe have lived in trying conditions, but time heals wounds and life is much more than bearable, though not quite normal.  Stoicism has merged with acceptance, and human nature returns.  They are unassuming heroes as are the rest of the people in their city.  We had the pleasure of sharing three bottles with these kind folk during our brief visit.

Of all the Champagne brands, Pol Roger finds favour with many.  An NV Pol Roger Champagne Brut was as elegant as ever and seemed even more enjoyable than ever.  In my early days, I couldn’t quite fathom what the fuss about it was.  It wasn’t the biggest or most complex, but I’ve learnt to let the wine do its own thing and come to you, rather than you search for its character.  And it does come out, subtle bread and yeast, yellow flowers and fruits, creamy textures and freshness.  It is now a favourite.

It can initially seem a bit awkward as you make the connection with Alwn Corban, but in a few minutes, his thoughtfulness, warmth and kindness is obvious and you can relax to discuss the things you have in common.  For him, it’s all about traditional values, steadfastness and delivering what you promise.  His 2010 Ngatarawa ‘Alwyn’ Hawke’s Bay Chardonnay does just that.  It’s a big wine in stature, and totally what we’ve enjoyed in the variety for decades.  Loads of citrus fruits, and a strong backbone of oaking, but with the acid nervosity and brightness of life to see it keep for a long time.  It isn’t one of the new Flash Harrys that are lean and taut and complexed by sulphide reduction, but a gentle heroic style.

Grace and sophistication, sleek and clever.  That’s how the 2008 Margrain ‘Home Block’ Martinborough Pinot Noir came across.  This was as smooth as silk and nuanced with florals, spices, red fruits, with a quiet richness that built and carried along its palate.  Margrain doesn’t instantly come to the top of the list when the roll call of Martinborough’s top Pinot Noir producers is made, but it always gets there and deservedly so.  Maybe it should deserve to be more recognised at the top level, but I don’t think the Margrains and winemaker Strat Canning are pushy types.  This bottle was a real pleasure. It brought a smile to our faces, and the Margrains and Strat would smile at us smiling. 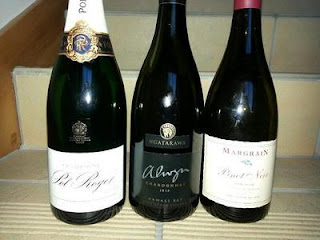