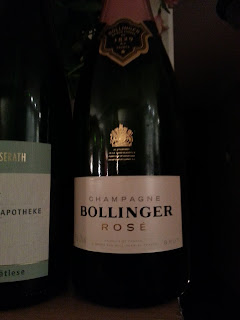 We had been partying all night, with a range of wines, from sparkling to whites to reds to fortifieds, and coincidentally as the clock turned over for the start of the new day, we reverted back to sparkling.  It wasn’t planned that way, but that’s what happened….magic!  The photo shows it was truly dark at that time of day!

The wine that saw us in for the start of new day was NV Bollinger Champagne Rosé.  One of the latter labels created to meet the world demand for slightly more accessible Rosé Champagne, this cuvee has been around for a while now, and the house has managed to imbue it with the evolving style.  When it appeared on the scene, it was rather robust with strong red fruits and plenty of structure, with the aldehydes and hint of oxidation that Bollinger was trying to clean up and move away from.  And as Bollinger succeeded, the wine became softer, lighter, more refined.  And this is where we are.  Who would have thought two decades ago that you’d be peaking about delicacy, softness and subtlety in Bollinger?  Anyway, a lovely start to our new day.
Posted by Wine Noter at Friday, January 01, 2016