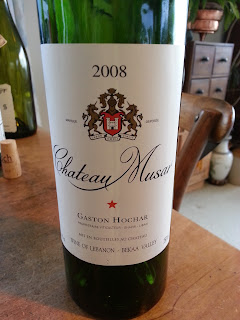 The Magic Man was keen to serve us a wine that would likely test our minds and palates.  SWMBO and I are suckers for this sort of thing, but it does often backfire, as we get things totally wrong.  No matter, it’s all fun and games, and there’s no pride to dent.

In the glass it was very dark red with black hues.  Asked if it was Old World or New World, we quickly settled on the old, but in honesty, we weren’t totally convincing.  Luck was on our side when the answer was Old World.  Then we were asked to guess the country of origin, without options.  We ran through the classic regions of France, Italy and Spain, and the wine just didn’t fit in.  It smelt and tasted ripe, with black fruits, sweet in aroma and on palate.  The near-raisining nature led me to think ‘off the wall’ Italian, if it was going to be a classic – say Veneto, in the field of Ripasso or Recioto, but the flavours were too up-front and not complex enough.  Then what could it be.  Southern Italy or Sicily was touted, and one could see elements of that climate there, but the familiarity of what we know, such as Primitivo and the likes weren’t present.  The wine was delicious with its unctuous, glycerol texture.  A funky brett emerged in the glass.  But nothing to worry about.
Mr Magic decided to put us out of our misery.  2008 Chateau Musar from the Bekka Valley in Lebanon was the wine.  Still in the ownership of the family, with the passing of Gaston Hochar.  Still making wine under war conditions.  Ripe fruit, with Cabernet Sauvignon at the core and some Cinsault plus other varieties.  The land is ancient, but is the winemaking Old World?  It didn’t fit into any pigeon-hole really.  A truly mysterious wine to guess, but one to savour.
Posted by Wine Noter at Thursday, April 07, 2016