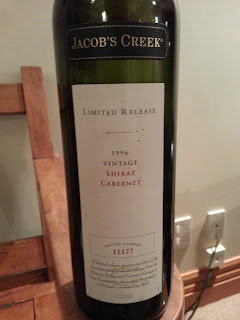 Remember those cups you serve infants their drinks of milk and juice in.  The proprietary name of Tommee Tippee is perfect as it the cups get knocked over, they just roll themselves upright.  So it was with the Jacobs Creek Limited Release Shiraz/Cabernet 1996.  In its youth, it was touted as the serious side of the world-loved, easy-drinking brand of Jacobs Creek, a label spinning off on its own from the parent company of Orlando.  Of course, nowadays it’s bigger than Orlando and bigger than ever in recognition.  But at the time Jacobs Creek need a little something super sophisticated to show everyone it was capable of doing the best.  This blend of Barossa Shiraz and Coonawarra Cabernet Sauvignon went on to win multiple top awards.

Two decades on it’s a different animal.  Still black hearted, but now with mahogany hues to show its age, the nose is earthy and dusty with game and savoury wood and meaty aromas.  Palate the same, but with a curious blend of sweetness, earthiness and decrepit character.  The wine felt Euro-funky with its slightly drying textures.  It appeared on its way out, taking the path to oblivion.  Then it would swing the other way to show ripeness, plum liquorice and eucalypt.  A touch of stalk, currant and herbaceousness.  Suddenly, this was alive again, and showing its upright and forthright nature.  The swing too-and-fro made it difficult to guess what it was.  But with a bit of time to settle, you could see.  Old and Aussie!
Posted by Wine Noter at Sunday, April 03, 2016